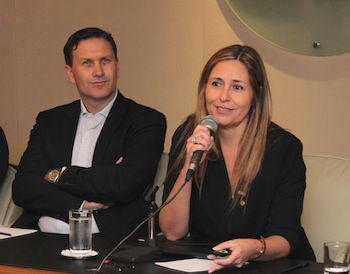 Erik Hannisdal was elected the new president of NBCC during the Annual General Meeting on March 30, 2016.

The Annual General Meeting of 2016 also formally marked the merger between the two Norwegian chambers of commerce in Rio and São Paulo.

About 40 people were present for the AGM, held at the Federação das Câmaras do Exterior (FCCE) in downtown Rio.  Mr. Hannisdal, representing M&O Partners, was elected president of NBCC for the period of April 2016-April 2017. Rachid Felix, Subsea 7, accompanies him as the new Vice-President of the chamber, and Johnar Olsen, Scana, continues as treasurer.

«It has been 16 years since my first meeting with the chamber and I am glad to say there has been big improvements. An active board has raised the chamber to a new level. We are going through a turbulent phase right now, but this will pass, and the merger with the chamber in São Paulo will make us stronger. I look forward to the coming year», Mr. Hannisdal said during the AGM.

The chamber now has 121 members, an increase of 17,5 percent the last year. The outgoing president Camila Mendes Vianna Cardoso also leaves the NBCC board after many years.

«It has been an extraordinary experience, and I have learned a lot», she said. Mrs. Mendes Vianna Cardoso highlighted the work of the NBCC committees in her report to the AGM.

«The activities of the committees have been noticed outside the chamber and spread within the companies. Today we see more people participating actively, not only the business leaders. Most meetings were full and the coordinators and vice-coordinators impressed me with their work», she said. Committee coordinators Coaracy da Silva and André Carvalho also gave brief comments on the activities that have taken place in the committees during the AGM.

Several other events took place the last year, and the visit to Nor-Shipping, marking the first international NBCC event, an event with Antaq and with former minister Moreira Franco were among the highlights mentioned by Mrs. Mendes Vianna Cardoso.

«Mr. Ronaldo Veirano and his firm have been working for Norwegian companies for more than 30 years and he has travelled frequently to Norway and has a good network in Norway. He will be a valuable asset to our board and we are very glad that he accepted to join us», Tom Mario Ringseth of the election committee, said.

An amendment to the by-laws was approved, formalizing the merger with the SP chamber, and Camila Mendes Vianna Cardoso thanked Knut Øvrebø for his positive attitude in the process and said that the companies in São Paulo can count on the support of the chamber in Rio.

Treasurer Johnar Olsen went through the financial report and guarantees that the cash position of the chamber continues strong.

Slow recovery
Brazilian economist Lia Baker Walls Pereira was the guest speaker invited to talk at this year´s AGM. She presented her economic outlook for Brazil to the audience at the meeting, and made it clear that the current crisis is deep.

«There are no quick solutions to the crisis, and the recovery will be slow. Recession is deepening and uncertainty is currently the main feature. Unemployment is high, inflation is high and confidence is low.The only good news is that the Brazilian international reserves are huge, of 359,4 billion USD. But in our view at IBRE, this is not the time to use these reserves», she said.

«It is very difficult to invest in such an economy. Confidence is stable at a very low level, and IBRE´s own index on drives to invest is collapsing. There are both political factors and macroeconomic factors that explain this.» In her presentation, Mrs. Walls Pereira also said that Brazil did not use the commodity boom a few years ago to make the needed changes in the Brazilian economy. Today, the lack of productivity is the main problem, even compared to smaller economies like Chile and Peru.

In her view, fiscal restraints are holding back the Brazilian economy, and the fiscal problems the country is experiencing, have to be solved

«Structural reforms of social security system and the retirement system, as well as the role of public policies to guarantee a fairer distribution, are all topics in the current Brazilian debate. But the fiscal front is the main problem, and the government is facing difficulties in financing its expenditure.»

The tax burden in Brazil is similar to OECD countries, but the public services lack the quality if the OECD.

«The low retirement age is the real issue for Brazilian economy. This is not something that can be solved in a year, but it has to be tackled by adopting unpopular solutions. We need to solve the political problems the country is facing, but any government will have a huge task to put the economy in order.»