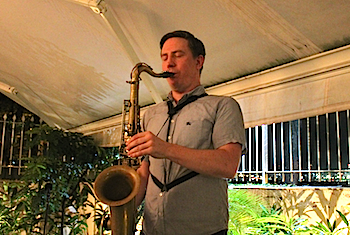 The Norwegian saxophone player and opera singer has performed for presidents and royalties. In December, he played for Nobel Peace Price Laureate, Colombia´s president Juan Manuel Santos during the Nobel banquet, and he was also the present from the Royal Family of Norway to the president of Finland during their state visit to the neighboring country in 2016.

This January, the talented tenor saxophonist and tenor was in Rio de Janeiro to participate in a festival called RC4  and it was Claudio Dauelsberg who invited the talented and barrier breaking musician to Brazil.

«We want to present new and bold initiatives within music and look for artists that can serve as an example. Håkon Kronstad is such a musician, a restless soul who was already established as a saxophone performer, but had the guts to listen to his intuition, return to the class room and start studying opera singing. It´s a very interesting story about a humble musician who had the courage to recreate himself», Mr. Dauelsberg said in the opening remarks to the event.

Creative crisis
During the pocket show, Mr. Kronstad played several pieces and mixed saxophone and singing in a way that has caught attention all over the world. He also shared his somewhat peculiar story with the audience.

Håkon Kronstad says he was going to a creative crisis and needed to move out of the comfort zone after two successful solo albums on the saxophone.

«At the age 32 I started singing opera, from scratch, although I was an established saxophone performer at the time and everyone asked me why?»

He was in New York at the time, when a friend invited him to the opera, something he was not at all very excited about. But to his own surprise, the opera made a huge impact on him and he decided he wanted to learn to sing as well. Mr. Kronstad told the audience about the skeptical reception of the singing teacher on New York´s Upper West Side.

«That was how it begun and I went back to Norway and became the oldest ever student at the Norwegian Opera Academy. I wanted to mix the different expressions and this is what I want to do here tonight for you», Mr. Kronstad explained during the event.

A gift
The pocket show attracted a full house to the residence of Consul General Sissel Hodne Steen on January 19, 2017. Brazilian musicians of many genres and famous singers like Carol McDavit and Guilherme Curtz were also present.

«The exchange of cultural expressions has always been an important instrument to create understanding between cultures, and art is something that expresses the soul of an individual, but also on a population. Many Norwegian artists like Munch and Ibsen found inspiration in other cultures, and many Norwegian musicians come here to be inspired. But tonight´s concert is an extraordinary occasion. Music can be a gift to us all, and tonight, Håkon Kronstad is giving us a gift», Mrs. Hodne Steen says.