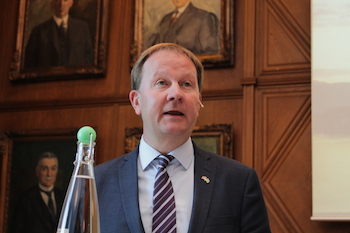 Clear messages on Brazil from high profiled speakers at Nor-Shipping 2015.

Several high profiled speakers gave presentations during the different Brazil@Norshipping events in Oslo from June 1-5, 2015. All of them highlighted the special bond and vital relations between Norway and Brazil:

«For more than 150 years, Norway has been one of the major players on the world oceans. Nor-Shipping celebrates its 50 year anniversary this year, and we at NSA are very happy that Brazil is an important part of the agenda this year. Norway and Brazil have a long and proud maritime history. The Brazil@Norshipping program is a reflection of the Brazilian market and of our strong and long-lasting friendship.»

Mr. Solstad gave the opening speech during the legal seminar hosted by Abran and NSA on June 4, 2015.

«Norwegian companies are well positioned to continue to play a key role in the developments in Brazil. Norway is home to one of the world´s largest merchant fleet and the second largest offshore service fleet. Norwegian shipping companies have a remarkable presence in Brazil, and we are proud to be recognized by Brazilian clients as reliable. 3300 port calls were made in Brazil by Norwegian vessels in 2014, a substantial increase since 2010, where 1500 port calls were made. The port calls in Brazil represent two thirds of the total Norwegian port calls globally. Two thirds were made by offshore service vessels, and Brazil now is outpacing Norway as the main offshore market. Offshore specialized vessels are essential to the industry. There are nearly 500 such vessels operating on the Brazilian continental shelf today.The Norwegian owned OSV fleet is substantial, with more than 30 percent of the highly specialized vessels. Important partnerships is constantly being made. Brazil is a strategic and long-term partner to Norway, and several steps are being taken to strengthen our ties even further. Norwegian Shipowners´Association was established in 1909, and today has more than 140 members. Abran was the first ever established branch of NSA outside of Norway, reflecting the importance that NSA give Brazil», Mr. Solstad said.

«A long-term commitment is the key to success», DOF owner Helge Møgster said during a roundtable session on June 3, 2015. His company is currently among the four biggest Norwegian investors in Latin America, and DOF has been present in Brazil since 2001.

«We go where the fish is and where the oil is and this was what attracted us to Brazil. Back in 2001, Norway was a superpower in terms of oil production. Brazil was a very small producer. I came to Brazil because I was considering to buy a fleet, and I was thinking like my grandmother – if you search, you will find, And this was what happened. Brazil found the pre-salt reserves. DOF has since invested 12 billion USD in Brazilian vessels. It has been challenging, and as Norwegians we are use to think of ourselves as the best, but the Brazilian market is much bigger than Norway. It is more challenging, and we are strong believers in what is going on in the Brazilian oil and offshore sector», Mr. Møgster stated.

«Our two countries are continents apart and different in culture and climate. We have geographical differences, but we still share long-standing and close relations», Mr. Henriksen said in the opening remarks to the Brazil@Norshipping seminar on June 3, 2015.

Photo courtesy of Nor-Shipping.«Our relations go way back. Brazilian coffee and Norwegian bacalhau are only two examples. The past decade we have developed our relationship even further, and we share a distinct common characteristics. We are both two of the world´s largest energy nations. Our energy is offshore, the oil and gas is offshore, and has to be produced under quite difficult circumstances. The challenges you are facing in the pre-salt areas today are some of the same that we have experienced in the North Sea. This has lead to close cooperation on the technical side. To the Norwegian offshore and shipping industry, the relations with Brazil are vital. 3300 port calls were made by Norwegian ships to Brazil last year and two thirds of these were offshore vessels. Three years ago, NSA opened its first branch office abroad, in Rio de Janeiro. Our organization was founded in 1909, and this is not only an indication of the importance of Brazil, but also a statement of commitment», Mr. Henriksen said.

Tore Ulstein, president of The Norwegian Confederation of Enterprises (NHO) and Vice President of Ulstein Group:

«Brazil is a very important country for the global shipping cluster, and important for many Norwegian companies. The development of the offshore fields in Brazil has lead to growth in the Norwegian investments in the country, as is the case for Ulstein Group. CBO recently ordered ship design for new vessels, and we really look forward to doing more business with Brazil and building new vessels at the Alianca shipyard. At NHO we work to promote the best environment for doing business in Norway and encourage open and transparent trade and investments around the world. 150 Norwegian companies are present in Brazil today and a substantial part of them are also members of NHO. This is why the Brazil@Norshipping seminar is an important forum to us. The tax system, local content requirements, visa regulations and training are important topics to us», Mr. Ulstein said in the opening remarks to the Brazil@Norshipping industry session on June 3, 2015.

«I was inspired when I visited Brazil last month and I am happy that you have brought the Brazilian spirit to Nor-Shipping. The Brazilian people inspire, their generosity and friendliness is heartwarming and I am pleased to see this big Brazilian delegation here. Brazil is an important partner to Norway, both politically, culturally and economically», Ms. Ayhan said in her keynote address to the Brazil@Norshipping seminar on June 3, 2015.

Ms. Dilek Ayhan with Mr. Miro Arantes, manager of Vard Promar.«Trade between Norway and Brazil has expanded dramatically over the last 15 years, and the key focus is oil and gas, but our trade also covers other important sectors. By the end of 2013, Norwegian investments in Brazil totalled 34 billion USD, and Brazil houses one of the largest Norwegian business hubs outside of Europe. This is a clear indication of the faith we have in projects and the developments of the Brazilian market. A lot of Norwegian companies feel at home in Brazil, and the maritime sector is a cornerstone in the bilateral cooperation between Norway and Brazil. Brazil is the second most important shipping market outside of Europe to Norway, and developments in offshore sector has proved several successful partnerships. The maritime industry represents 11 percent of the value creation in Norway, not taking oil and gas into account. The government will continue its efforts to guarantee that our countries remain long-term partners, also in the future. Business in done between people, and trust is very important. Seeing you here in Oslo together – this is what will cultivate and strengthen our ties even further», the Deputy Minister said in her address.