Only Latin American port selected in the competition entered with Emergency Preparedness project related to oil incident on Brazilian coast in 2019.

Porto do Açu has won the World Ports Sustainability Award from the International Association of Port and Harbours (IAPH´s World Ports Sustainability Award) and gained recognition for their project in a virtual ceremony held by IAPH this Wednesday, June 24. The award recognizes on a global scale all ports that invest heavily in sustainability efforts. Açu was the only Latin American port that had its project selected along with 45 others who applied for the award, in six categories, within the initiative of the World Port Sustainability Program. The voting began in February this year and was made available on the IAPH website for public voting. A qualified jury composed of internationally recognized names from the maritime sector also participated in the selection procedure.

Competing with some of the largest ports in the world, Porto do Açu was selected the winner in the Safety and Security category, with their Emergency Preparedness Project. The preventive, proactive and integrated plan aimed to train and prepare various Açu terminals, while actively collaborating with other involved partiers (regulatory agencies, environmental players, etc.…), to act in the event of major incidents involving oil products. The initiative was launched after an oil-spill incident took place and spread over the beaches of northeastern Brazil in August 2019. 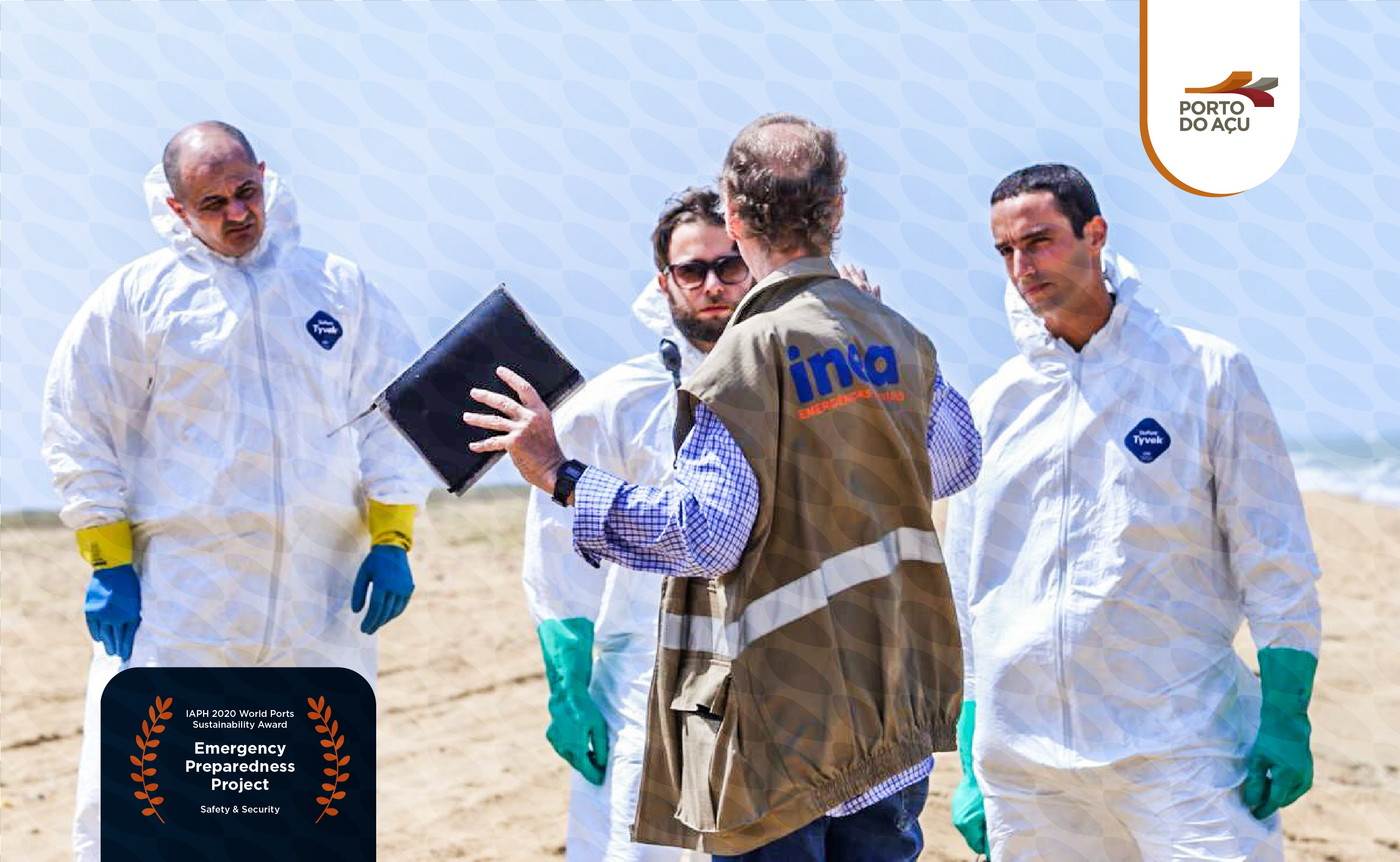 Due to the possibility of the material reaching São João da Barra (RJ) coast, where the port is installed, Porto do Açu  pro-actively created a task force to manage and respond to the incident, hereby assuming a prominent role in the set-up of an integrated cooperation with the port community, local stakeholders, municipal and state governments, the National Health Agency and the Brazilian Navy. Actions included the set-up of the Crisis Committee, monitoring of official data, development of daily reports, application of trainings and simulation-exercises as well as local monitoring covering areas such as beach shores and  using techniques such as drone-flights.

“It is an honor to win this award, especially in this category that emphasizes the main values ​​of Porto do Açu: safety in operations, collaboration between partners and commitment to sustainability. For us, it is a fantastic recognition of the capacity of our port, which is still young, to act pro-actively through integrated actions with other partners by effectively responding to emergency situations and mitigating risks for the people, the environment and the port community. This award shows that we are on the right path and gives us even more motivation and energy to move forward.”, says José Firmo, CEO of Porto do Açu Operations.

In case the oil-spill would have reached our shore, important projects in Porto do Açu would be directly affected, such as the Private Reserve of National Heritage (RPPN) Caruara – the largest private environmental reserve dedicated to restinga ecosystem in the country – and the Sea Turtle Monitoring Program, which has already returned to the sea nearly 1 million hatchlings of the Caretta-caretta species. Moreover, the local economy could also have been negatively impacted, as many inhabitants of the region depend on fishing as their main source of income. The spill drew attention to the challenges related to the ability to respond to major incidents involving oil and reinforced the important role that ports can play in emergency preparation and response.  The intention of the project is to serve as an inspiration for other ports in the world to have a structured plan for reacting to incidents of this nature. 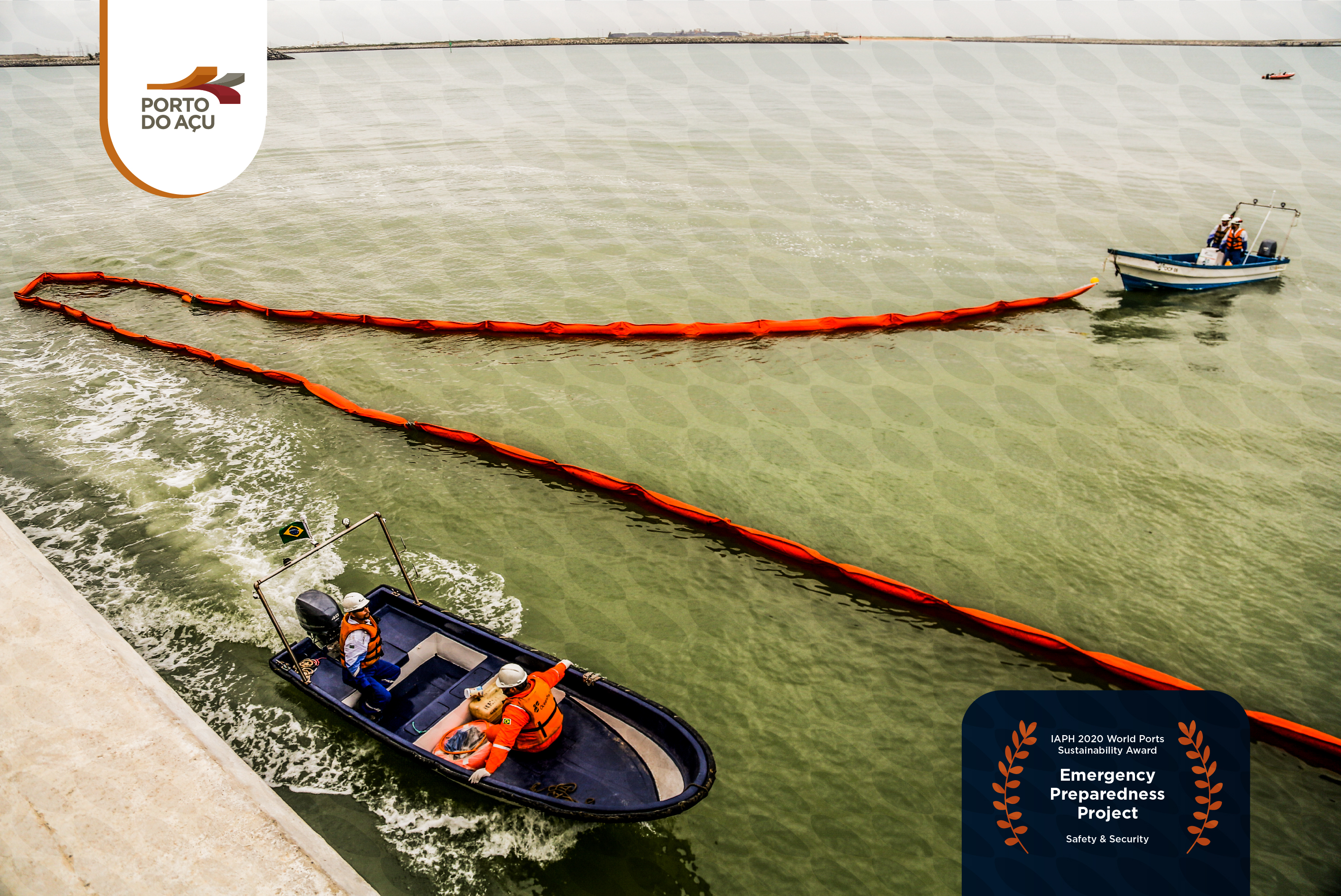 Origin of the incident is still unknown
In August 2019, an oil spill reached over 2,000 km of the Brazilian coast in an unprecedented incident of catastrophic proportions. More than 5,000 tons of oil residues were collected on the coast of 11 states, a volume 20 times greater than the sum of all oil incidents reported since 2012 in Brazil. The source of the spill remains unknown.

About Port do Açu
Since beginning of its activities in 2014, Porto do Açu has a great vocation for the oil and gas segment due to its differentiated infrastructure and strategic location close to the main offshore basins in the country. The private port enterprise handles oil, dry bulk (such as iron ore, coal, coke, bauxite, pig iron), general and project cargo, among others. It holds 130 km² area of land, of which 40 km² are dedicated to an environmental reserve. Currently, 14 companies are already installed: Porto do Açu Operations, Açu Petróleo, BP Prumo, B-Port (company of the Edison Chouest Group), InterMoor, NOV, TechnipFMC, Wärtsilä, Ferroport, Anglo American, Dome, GNA (Açu Natural Gas) ), Açu Station and Aerodrome Norte Fluminense.

About the World Ports Sustainability Program – WPSP
The International Association of Ports and Harbours (IAPH) created the World Ports Sustainability Program in 2017. Guided by the 17 UN Sustainable Development Goals (SDGs), the program aims to improve and coordinate future port sustainability efforts around the world and promote international cooperation between supply chain partners. The program is based on the Global Ports Climate Initiative, initiated in 2008 by the IAPH, and has been extended to other areas of sustainable development. Founded in 1955, the IAPH has become a global alliance, representing around 200 ports and 140 port-related businesses in 90 countries.