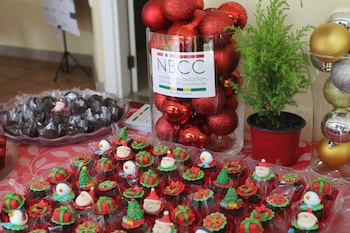 Not even the rain was able to spoil the traditional NBCC Family Year-End Celebration, that took place on December 4, 2016.

The traditional Year-End Celebration also offers the NBCC members an opportunity to bring their families, and despite the drizzly weather, there were children entering the pool, enjoying treasure hunting, getting superhero tattoos, chasing soap bubbles and of course appreciating the very tempting Christmas sweets.

The bar served a variety of cold drinks and a typical Brazilian churrasco was on the menu for the event.

NBCC treasurer Johnar Olsen represented the board at the event, and in his address to the party, he talked about the many important milestones that the Norwegian Brazilian Chamber of Commerce has reached this year. The merger with the chamber in São Paulo, successful business events in São Paulo and Brasilia and the very popular NBCC Networking dinner during Rio Oil and Gas 2016, that gathered important stakeholders of the oil and gas industry, are among these milestones.

«Although the business environment in Brazil continues challenging, it has been a fantastic year for our chamber, maybe the best year in the history of NBCC», Mr. Olsen said.

He also complimented NBCC president Erik Hannisdal, his predecessor Camila Mendes Viana Cardoso and of NBCC´s Executive Director Glorisabel Garrido Thompson-Flôres for their hard work in improving the activities of the chamber.

«We set a new membership record this year and have hosted important events. Financially, we are in a comfortable situation, and the networking event at Rio Oil and Gas was a tremendous success. Fewer companies were present at the exhibit in Riocentro, but almost 600 guests found their way to our event», he said.

In times of crisis, it is more important than ever that the chamber offers opportunities for networking, and as the year of 2016 is coming to an end, Mr. Olsen expresses greater optimism than he did one year ago.

«I expected that the participation in chamber events in this very challenging year would go down, but what we have seen, is the opposite. The chamber has in a very satisfactory manner been able to promote Norwegian-Brazilian business, spread information and create venues for networking. Today´s family event is also important because it provides us with the opportunity to meet the families and children of our colleagues and business partners. It brings us closer together and this was also the intention when we first created the Year-End Celebration several years ago», Johnar Olsen said.

Mr. Olsen himself was accompanied by his wife and three children, and his daughter was the one closing his address to the party wishing everyone a merry Christmas!

NBCC would also like to take the opportunity to wish all our members and all our reads a merry Christmas!