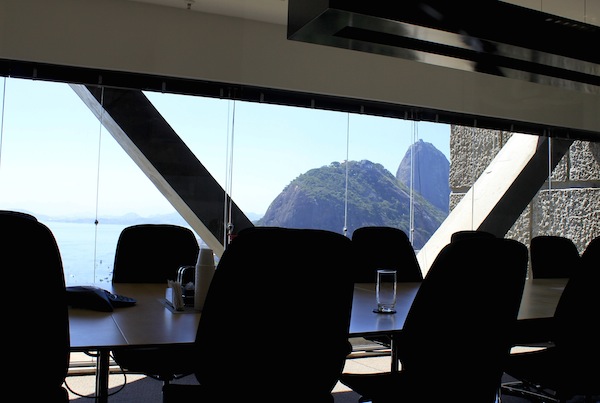 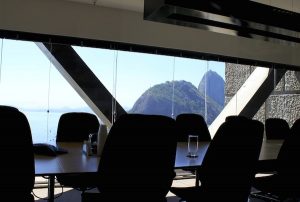 The Norwegian Business Center has offices available, and the view from the office is certainly privileged.

The Norwegian Business Center at 2401 Rio Sul Tower in Botafogo, Rio de Janeiro is celebrating the 10th anniversary – with a fantastic track record of contribution for the Norwegian industry in Brazil.

Founded in 2007, by Intsok and Innovation Norway the idea was launched during a strategy meeting between Johnar Olsen and Erik Hannisdal. Olsen had just been hired by INTSOK (today NORWEP) and Hannisdal was the head of Innovation Norway at the time.  Mr. Olsen came from Aker Kvaerner, where he had spent 11 years, and as the head of INTSOK, he asked himself – what is the most important when a company enters into a new market? The natural answer was to concentrate on the core business. But how could this be facilitated?
According to Mr. Olsen, the company should let someone else facilitate all bureaucratic activities of administration and office support.
Back in 2007, the idea met some resistance, as other official country representations in Brazil had tried the same and failed. Erik Hannisdal still decided to take the idea back to Norway for internal discussions, and it only took a few weeks before the green flag to go ahead was presented.
Johnar Olsen was then engaged to go on a though mission to visit around 70 companies in two weeks on a road show in Norway, and finally after some weeks, the first company signed the contract:
Marintek was the first client at the incubator and Mr. Svein Karlsen was appointed the Marintek managing director in Brazil. Helle Moem was one of the people who authorized the contract, and some year later Helle Moen became IN head in Brazil.
During the next years, close to 40 companies among them Statskraft, DNB, Solstad, Sintef, Scana, Havyard, Novenco, Vector, FPSOcean, Aibel, Odim, Anchor Contracting, Remora, SPT Group, Bergen Group Dreggen, Gard, IRIS, Scandinavian Bunkering, IKM, Resmann and many others have used the offices at Torre Rio Sul 2401. It is a true success case.
The most interesting part of sharing the office with other companies, associations and official government representations is the market intelligence and the networking opportunities. Based on the fact that there was no competitors at the same period in the office, whenever a company was searching for bid information, name of the right person inside Petrobras, accounting companies recommendation, who is who when hiring a new employee or new managing director, et cetera – the answer was often found inside the office, costing only a cup of coffee in the “inspiration area” created inside the meeting room in the beginning.
Companies were also brought in from outside to make part of the market intelligence team, providing the companies with a unique tool.
The office was initially called NBIO (Norwegian Business Incubator office) and in 2010, the name changed for Innovation House. Today is called Norwegian Business center.
Mr. Olsen, who is currently the manager of the Business center, also implemented a second unit of the same concept in Houston, Texas in 2008.
Nowadays, ABRAN, Innovation Norway, NBCC, Norwegian Consulate, NORWEP  using the premises administrated by BRASUNOR.
The Norwegian Business Center has offices available and your company is welcome to joining this unique solution. Feel free to contact us by phone +55(21) 35440000 or  email 2401@brasunor.com
Source: Brasunor