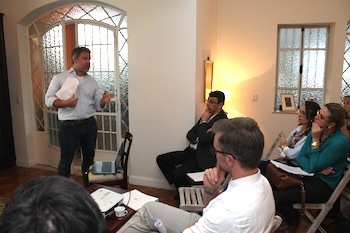 The report was commissioned by the Consulate General and assembled by the Igarapé Institute. The event took place on March 30, 2017, in the residence of the Norwegian Consul General in Rio, Sissel Hodne Steen, and she also held the opening remarks:

«We receive a lot of requests about the current security situations and the implications for individuals and for companies. Our intention is not to create fear. We believe that information creates confidence, and as the security situation right now seems to be worsening, it is important to understand why», Mrs. Steen said.

Co-founder of the institute, Mr. Roberth Mugah, presented some of the main conclusions of the report and started his presentation introducing the Igarapé Institute, before outlining some of the findings:

«We are currently seeing a considerable deterioration with virtually all forms of crimes increasing, but we need to keep in mind that this happens after dramatic improvements in the period from 2009-2015. This is happening at a very complicated time where the economic and political crisis have resulted in unemployment and austerity initiatives that are paralyzing the public security provision», Mr. Mugah said.

The report shows that the cuts to state and city budgets were significant, and as a result, there are growing levels of perceived insecurity, visible in social media and popular press. A knock-on effect of the Lava Jato investigations is that the notions of impunity are gaining ground. Robert Mugah sees the Amarildo case in 2013 as a watershed incident, a case that turned public opinion, and brought back the old metrics of policing, the old style policing with a more aggressive approach back, after a period where the military police and the UPPs had been gaining trust and recognition.

«Sticky»
During the presentation of the report, Robert Mugah showed several different maps of Rio and highlighted how crime in Rio is concentrated.

«Crime is incredibly sticky or concentrated, in specific places, at certain times among specific people, it is not randomly distributed», Mr. Mugah says.

According to the report, violent crime is concentrated in neighborhoods such as Pavuna, Campo Grande, Bangu, Realengo, Penha, Irajá, Anchieta and Guadalupe. But Sao Conrado, Cachambi, Centro and Copacabana are also on the list.

When it comes to homicides, around half of the reported homicides are due to drug-trafficking related violence, legal interventions by the police or disputes between intimate partners. «Roughly 50 % of all homicides are concentrated in just 1,2 % of street blocks», the report says.

«But we need to keep in mind that the number of homicides in the Rio metropolitan area are still half of the numbers 10 years ago. Homicides are concentrated in Baixada Fluminense

Volatile situation
The report also presents an overview of the geopolitics of organized crime in Rio. «There are alarming reports of PCC initiating new alliances in the periphery of Rio», the report says, warning about an escalation of the level of conflict between the Sao Paulo based PCC and Rio based CV as PCC is trying to increase presence in Rio de Janeiro. The militia is also expanding their territorial reach, the report says.

«Brazil is not a narco state, but we are seeing some dangerous signs and the growing presence of the PCC is one sign. PCC is now present in 22 states. In September last year, the 24 year long truce between CV and PCC broke, and PCC is now increasing its presence in Rio. Rio is volatile and it is not clear what will happen, as criminal governments of the city are being renegotiated», Mr. Mugah says.

In the chapter on future trends, the report describes the short- and medium-tern security projections for Rio de Janeiro as dark, and there are worrying signs that the situation could deteriorate further, with several «known unknowns».

The Igarapé Institute is however working closely with the Rio police, and recently developed a real-time crime mapping digital system for the state of Rio, tracking crime and reporting it back to the police, enabling hot spot policing.

«This was a big change for the local police, and access to more data is key to digging ourselves out of the situation», Mr. Mugah says.