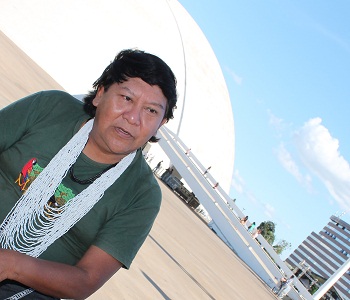 Since 1983, the Norwegian government has supported indigenous people in Brazil financially. The 30 year anniversary for the support program was commemorated in Brasília in November.

For the commemoration, the Norwegian embassy and the Brazilian organization Instituto Socioambiental organized a photo exhibition with 44 photographs portraying important moments from the years of struggle for indigenous peoples rights in Brazil. The formal opening of the exhibition was followed by a show with the sami artist Elle Márjá Eira on November 19. The following days, the embassy and Funai organized a seminar for NGO´s and different indigenous organizations from all over the country.

Davi Kapenawa Yanomami (photo to the left), who received King Harald of Norway in his village earlier this year, and Raoni Metuktire Kayapó were among the indigenous leaders present at the festivities. The Yanomami indians who live in the border region between Brazil and Venezuela, were among the very first who received Norwegian support in 1983.

“Without Norway´s support, there wouldn´t be any of us left, and we are grateful that Norway is supporting our struggle for land and rights”, Kapenawa says.

According to the president of Funai, Maria Augusta Assirati, no other countries give such substantial support to the indigenous cause.

“Funai has limited funds at its disposal, and the Norwegian support has guaranteed a broader approach”, Assirati says.

Gaining influence
Head of the Latin-America section in the Norwegian ministry of foreign affairs, Mrs. Kjersti Rødsmoen, represented the Norwegian government at the commemorations last month.

“Norway and Brazil have a broad relationship focused on trade and investments. Cooperation on human rights is also high on Norway´s agenda and Norway is proud to be a global leader on international development assistance”, Mrs. Rødsmoen said during the opening of the seminar on November 20, 2013.

This year, 30 million NOK were distributed among different organizations.

“Norway has stepped up the assistance to indigenous issues, and this is the highest priority in all the countries we cooperate with. I am pleased to see that previously excluded groups are gaining greater influence and acceptance. This is appearant in Latin America”, she said.

In the photo below: Kjersti Rødsmoen and Norway´s ambassador to Brazil, Aud Marit Wiig.

The Norwegian government would also like to see indigenous people benefiting from the funds of the Amazon Fund. Currently, the Norwegian indigenous support is used to support institutions financially and to guarantee the participation of indigenous representatives in meetings and congresses by covering travel expenses.

“This is something we follow closely. Although Norway and Brazil have different challenges, I hope that we can inspire eachoter and share experiences”, Mrs. Rødsmoen said.

Oil exploration
But although a lot has been accomplished during the last 30 years, several representatives of the indigenous organizations expressed concern about the current situation.

“We have won important victories, but now we fear a backlash. In Congress, there are groups working actively to reduce our constitutional rights. Today we are fighting for the right to be heard and we are fighting to not lose the rights the constitution from 1988 guarantees us”, says Lucia Fernanda Jófej Kaingáng, director of Inbrapi, one of the organizations that receive Norwegian support.

Conrado Von Brixen Octávio represented the organization Centro de Trabalho Indígenista (CTI) at the seminar. He talked about the situation for indigenous in the region of the border between Brazil and Peru, west in the Amazon. The Norwegian support has been fundamental to CTI, he said. Plans for oil and gas exploration in the region is however causing uncertainties.

“The plans for exploration and oil and gas production in the Amazon region will have a great impact on the indigenous people living here. The indians are not being heard, and the National Petroleum Agency (ANP) is completely disregarding their constitutional right to be a part of the process”, he said.

The same goes for the state of Acre, where several onshore blocks were auctioned in the 12. ANP round in November.

The indigeneous peoples in the region were not consulted in this process, says Maria Luiza Pinedo Ochoa from Comissao Pró-Indio do Acre (CPI-Acre + RCA).

Norwegian ambassador Aud Marit Wiig was also present at the commemorations. There is still a lot of work to do, she admits.

“30 years is a long time, but the cooperation is still relevant, dynamic and challenging. A lot has been accomplished, and the indigenous people in Brazil are no longer invisible. They are less marginalized and participate more actively in political processes. But there is still a lot of work to do, and an important priority is to give indigenous people in Brazil access to the fora were decisions are being made on their behalf”, Mrs. Wiig said during the commemoration.

The photo exhibition will later be shown in São Paulo, Rio de Janeiro and Oslo.