A big win for democracy 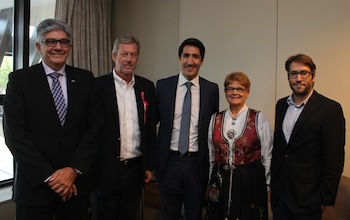 The power of democratic institutions and the important accomplishments of the Lava Jato task force in Rio de Janeiro was on the agenda for this year´s traditional breakfast seminar on the Norwegian Constitution Day, May 17, 2017.

Federal prosecutor Eduardo El Hage, who is also the coordinator of the Lava Jato task force in Rio de Janeiro, was the keynote speaker, and few topics are more suitable for debate and reflections on the day that Norway and Norwegians all over the world celebrate their Constitution Day. The breakfast seminar on May 17, organized by The Consulate General and NBCC, has become a tradition, and both Consul General Sissel Hodne Steen and NBCC president Rachid Felix participated in the panel debate that followed Mr. El Hage´s presentation.

«Brazil was a safe haven for criminals and a very dangerous place for investors, but today, Brazil is becoming a dangerous place for the criminals. We have discovered acts of corruption in construction, health and in the Rio Court of Accounts», Mr. El Hage said in his presentation.

The federal prosecutor shared several insights from the investigations in Rio de Janeiro, that started when representatives of contractor Andrade Gutierrez brought up the name of former governor Sergio Cabral in interrogations.

A Norwegian breakfast was served before the seminar.

«We are very happy that we managed to map the criminal organization of Sergio Cabral, and today we actually mark the six month anniversary of the detention of Cabral. It was a very complex task, and in the first phase of the investigation, we went after the financial operators of the organization and tried to figure out where the money came from and where it ended up. We had to decipher handwritten notes and decode nicknames», Mr. El Hage said. The Lava Jato task force in Rio de Janeiro has so far managed to recover more than 100 million USD and 17 members of Cabral´s organization are in jail.

«Now we see a domino effect, and we are advancing mainly as a result of the cooperations agreements made possible in the new Brazilian Corruption Act from 2013, where we can use a defendant to produce evidence.»

Mr. El Hage showed photos of evidence and explained how he and his colleagues work. Back in 2009, solid evidence against Sergio Cabral was also seized, but this was later thrown out and found invalid in a Rio court.

«It was a huge setback, but now I see the light in the end of the tunnel. I am confident that people stealing in plain sight like Cabral, will not happen anymore, and I believe that public money that has been diverted, will be recovered, I am optimistic», he said.

Lava Brasil
In the panel debate that followed the presentation, leniency agreements and the role of the media and society, were among the issues that came up.

«These agreements are the future, and we need to find the balance between punishing the bad guys while preserving the company», Mr. El Hage said.

Bruno Brandão commented that the Lava Jato investigations happened after a long process of strengthening democratic institutions with “the starts aligned”, and said he would also like to see companies punished for briberies committed abroad.

Eduardo El Hage emphasized the importance of the pressure of the people, so that the transformation of common political practices will actually happen.

«The power is with the people, and the people has to vote well in next year´s election. Media is fundamental and we depend on both the media and on society to sell a strong message to the politicians to avoid possible push-backs in the future. We cannot fight this alone. Sergio Cabral´s biggest mistake might have been that he did not run for office in 2014. If he had run, we could not investigate him. This shows why «foro privilegiado», the immunity granted to politicians on several levels in Brazil, is a big mistake.»

The panel also took questions from the audience.

«For Brazil to clean up this mess we need «Lava Brasil» and not only Lava Jato. This dirt is hindering the country to advance and taking away hospital beds and school desks. It´s a disaster for the country. May 17 is a happy day, but this is not a happy issue. Life is however a movie, not a still picture and this is a movie I hope will have a happy ending. Brazil has a huge potential, but inefficiencies like corruption are one of the reasons why Brazil does not realize its potential. Getting rid of it will guarantee a happy ending for Brazil», Mr. Haakon Lorentzen said in his closing remarks.

The children´s day
The commemorations of the Norwegian Constitution Day started on May 16, when Consul General Sissel Hodne Steen hosted a reception in her residence in Urca. Representatives of different Brazilian governmental bodies, the Norwegian-Brazilian business community and friends of Norway were among the guests.

On May 17, the colorful family celebration took place in the Norwegian Church Abroad, Princess Ragnhild´s Church in Gávea. More than 50 children and their families were present at the party. What differs the Norwegian way of celebrating the national day from other countries, is the focus on the children and the children´s parade where the children sing and wave their flags. In Oslo, children from more than 120 schools participate in the parade this year.

Pastor Sjur Askjer and his wife Margunn Askjer were the hosts of the party, where the children enjoyed traditional games and were allowed to eat as many hot dogs and popsicles as they wanted.