A call for adjustments 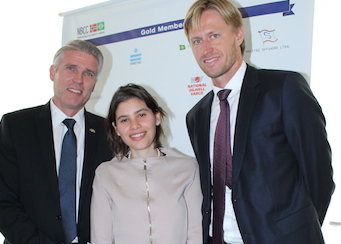 “Brazil is currently facing a new development phase, and it is necessary to see inflation as one of the main challenges”, says Bradesco Senior Economist Fabiana D´Atri.

Fabiana D’Atri is a Senior Economist of Bradesco´s Economics Department and also the Head analyst of International Economy. Her presentation to NBCC and Swedcham on April 30, 2014 was entitled “Brazil – A Macro-economic and Political Perspective”. According to Mrs. D´Atri, Brazil is facing a new development phase, conditioned by the global scenario and new domestic challenges.

“I do not have a crystal ball, and I can´t tell you neither who will win the World Cup nor who will become the next president of Brazil. But controlling inflation should be one of the top priorities of the new government»”, Fabiana D´Atri said in her opening remarks during the event in the Associação Comercial do Rio de Janeiro (ACRJ) in downtown Rio de Janeiro. The event was co-sponsored by BaraK Brasil.

About 40 people attended the seminar to get a basic understanding of the current macro-economic environment in Brazil, from the perspective of a very experienced economist. Before coming to Bradesco, Fabiana D´Atri worked for BBI (Banco Bradesco de Investimento), Mauá Asset Management, Tendências Consultoria and Banco Real ABN AMRO. She has a Master´s degree from Fundação Getúlio Vargas (FGV) and is graduated in Economics at the University of São Paulo (USP). Her current work focuses on the Chinese economy and Brazilian macro-economic issues.

According to Mrs. D´Atri, inflation is one of the main challenges for the Brazilian economy today. In 2011, the forecast for the 2014 annual inflation was of 4,6 percent, but current estimates points to a hike closer to 6,5 percent.

“Currently we have a higher inflation than forecasted, and we also have higher estimates for 2015. This helps explain the lack of household confidence we are observing, and explains why people are expressing their dissatisfaction with current policies. Curbing inflation will therefore be one of the main concerns for the macro-economic policies implemented for this year and the next”, she believes.

Last year, Brazil actually witnessed a shift in the monetary policy of the federal government. Since April 2013 the Brazilian Central Bank has increased the interest rates from 7,25 percent at the lowest, to the current 11 percent. Mrs. D´Atri finds it likely that we will see new adjustments and reach 12 percent during 2015.

“Despite this shift, inflation is still high. Maybe we need to see a slowdown of the economy, with consequences for the labor market, before we see any significant relief on inflation. Monetary policies alone cannot do the job, and some fiscal adjustment must be seen in the next years”, Fabiana D´Atri says.

She identifies the Brazilian service sector as the biggest driver for inflation. Wage adjustments contribute to keeping inflation high, and there is not enough supply to support the demand in the labor market. The labor market is however staying healthy, due to the lack of workers in today´s market. The current demand is bigger than the supply of people willing to work, and the unemployment rate is low.

“This is why inflation is more important than employment in today´s economic environment”, Fabiana D´Atri says.

Weak industry
Another tendency that Mrs. D´Atri bordered in her presentation, is the slowdown in the growth of the Brazilian gross domestic product (GDP). The current GDP growth is about 1,7 percent a year, according to consensus market forecasts.

George Robert Osborn, Swedcham member and board member of Hospital Samaritano in Sao Paulo (to the left) and Marco Aurélio de Andrade, secretary-general of the foreign chambers of commerce in the Associação Comercial do Rio de Janeiro (ACRJ), accompanied by Glorisabel Garrido, the executive manager of the NBCC.“We were wrong when we said Brazilian economy could grow 5 percent in the long term. Why? We don´t have a satisfactory infrastructure in this country, we don´t have a workforce with the required qualifications nor an environment for investments considered healthy enough. There are uncertainties and doubts, and not enough supply to support the demand”, Fabiana D´Atri says.

To her, the GDP weakness is a reflection of the weakness of the Brazilian industrial sector.

“A large part of government policies has been focused on creating a domestic market, and consumption is a key driver for Brazilian growth. But we cannot keep an economy just based on demand. We need the industry to actually produce, develop technology and innovate.”

In general, people are employed and keep asking for wage adjustments..

“There is also a demographic imbalance. In order to keep the workers, the companies must keep wages adjustments in a high level. Wages are going up and consumption is also going up, but industry is losing productivity”, Fabiana D´Atri says.

The wage increase in formal labor contracts is recently going down, and this is good news, according to Mrs. D´Atri. But if you compare increase in hourly compensation costs in international manufacturing, the increase in Brazil has been of 87 percent from 2006-2016. In Norway the increase was 42 percent.

“This says a lot about Brazil´s situation. Many European countries adjusted wages after the financial crisis and are doing a lot better today than five years ago.”

She believes that taming inflation is the first, big challenge for the next Brazilian president. But Brazil needs additional adjustments, that will define agenda of the new government.

The adjustment agenda is about what has happened the last years and how to balance supply and demand. In order to do so, Fabiana D´Atri sees the need for an adjustment of fiscal policies, of the pension system, for new policies for the labor market. She also sees a need for minimum wage readjustments.

«Brazil is ranked number 1 in the production and export of coffee, sugar and orange juice, and second in the production and export of soy beans in the world, and this without a proper infrastructure to transport all this. Imagine if we had proper roads and railroads», Fabiana D´Atri says.“Several adjustments are required, and the economy will react accordingly, depending on the priorities of the new governments. But what about infrastructure and education? We still have to find time and room to discuss a positive agenda, and the new government should try to balance the two agendas. They are going to need time to deliver the adjustments, but must invest in the positive agenda as well.”

“We have the World Cup coming up, and we don´t know what will be the agenda for the new government. Many companies are postponing big decisions. This is why we expect an general accommodation in the market.”

But foreign direct investments in Brazil continue high, and the forecast for 2014 is 60 billion USD. In the top year of 2011, 66 billion USD was invested in Brazil.

“Brazil is still attractive. You are all still here. Confidence is something very tricky, and a lot can change in a short time. You can say that Brazil is not the darling of the global economy as it was before, but Brazil is still playing and still making money”, Fabiana D´Atri says.