A call for more operators and less regulations 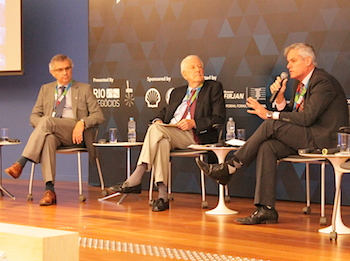 Despite the storm raging in the national oil and gas industry, nobody is turning their back on Brazil. Adjustments are however required.

The expression «the perfect storm» was used by many of the panelists and speakers during the business event «Are there still business opportunities in the oil and gas market», a business seminar organized by Rio Negocios during the Annual General Meeting of the World Energy Cities Partnership (WECP) in Rio de Janeiro on October 26, 2015.

WECP is a non-profit organization established in 1995, whose members are globally recognized as international energy capitals. Stavanger mayor Christine Helgø is the current president of the partnership. Mayors from several other member cities were also present, along with representatives from Scotland, Quatar, Canada, Denmark and Norway.

«Massive opportunities»
In the first session of the event, IBP president Jorge Camargo, ABESpetro president Paulo Martins and former IBP president Alvaro Teixeira talked about what is happening in Brazil.

According to Rio Negócios, there are still «unprecedented opportunities in Brazil and by 2035, the country will be the world´s eight largest oil producer. According to Mr. Camargo, who is also the former country manager of Statoil do Brasil, Brazil is currently experiencing the worst and the best moment in the history of the national oil industry, at the same time.

«It is the perfect storm, and the crisis is serious, due to both internal and external factors. The consequences have been devastating, but we can overcome it, and future looks bright. The exploratory potential is extraordinary and reserves dimly enormous, especially in the pre-salt areas», Mr. Camargo said.

He argued that the exploration of pre-salt is demanding and complex, and that limits of technology will be tested.

«But the pre-salt exploration is competitive and economically robust, even with the current oil price», he said. Mr. Camargo also shared his vision on the future with the audience:

«Brazil has the capacity to double or even triple its oil production and attract investments. But due to the current scenario, we are not managing to attract the investments we need. This is why the national oil industry needs to adjust, and our politicians need to make certain choices. Now is the time to adapt our regulatory model, to allow multiple operators and to simplify the local content requirements, that is causing so much uncertainty and higher costs», Mr. Camargo said.

According to Paulo Martins, who used to work for Subsea 7 before assuming the top position in ABESpetro, it is fundamental that Brazil does not lose the capabilities the local industry has acquired the last years.

«Today we see projects being postponed or even cancelled, and with only one dominant client, the situation is difficult. Our national subsea industry has the capacity to handle future demands, and we need to keep up the R, D & I programs to attend future needs and also improve competitivity.»

Mr. Martins also talked about the need to ease requirements, and believe that Brazilian authorities will realize how urgent this has become for the local industry. Jorge Camargo used Norway as an example and said that Norway in the early years of the Norwegian oil industry tried to attract as many operators as possible.

«They were aware of the fact that this was the best way to proceed to develop a strong local industry, and they succeeded.»

The workshop took place in the GE auditorium at the technology park at Fundao. Profitability challenge
In a second panel, representatives from international oil companies shared their views on the current situation. According to Brazil manager Pål Eitrheim in Statoil, competitivity is a key word.

«I´m competing for resources every day, inside the company, with other countries. It is a fact that the cost lever has increased and that we are facing a profitability challenge. But looking at Brazil, there is no other shelf more attractive, and there are massive opportunities here. Statoil wants to stay, develop and grow in Brazil, but we need to transform potential into profitability», he said.

He also argued that a long term approach is needed.

«The low oil price forces us to improve the core business, and we cannot point fingers at politicians and regulations. We, the industry, has become too costly and too complacent and we have a job to do», he said.

Not the end
Representatives from the WECP cities also talked about how they are coping with the current situation in the global oil and gas industry.

Mayor Christine Helgø.«The current down cycle is more dramatic than expected, and the impact on Stavanger is severe. Unemployment is increasing and tax revenues decreasing. But it is important to repeat that the Norwegian oil and gas is not about to end. Several discoveries offshore are under development, and by 2020, the Johan Sverdrup field will come on stream and result in the highest oil production out of Stavanger ever in history. The key word is however change, and we work to identify new opportunities, and reckon we´ll need 10.000 new jobs by 2020, to become less dependent on the oil and gas activities.»

Headquartered in Houston, USA, the World Energy Cities Partnership (WECP) is the international hub for energy cities. Its objective is to support the growth of the energy economy.  Currently, there are 23 world energy capitals that make up the WECP collaboration network. WECP membership allows cities to work within the organization to expand business opportunities, share ideas on investment attraction and urban development, and develop strategic alliances with other world energy cities.

The WECP delegations also visited the Sugar Loaf, the technology park at Fundao and the Olympic Park during the Annual General Meeting in Rio de Janeiro.