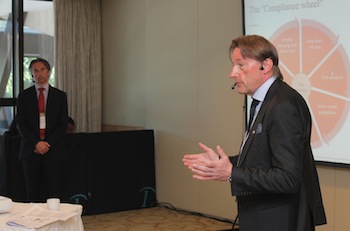 The seminar took place at the Windsor Atlantica Hotel in Copacabana and was an event organized by the Consulate General, Intsok, Abran, Innovation Norway and NBCC.

Risk analysis and the use of agents when operating in a new market were among the topics discussed by the speakers.

Norway´s Consul General Sissel Hodne Steen opened the seminar on April 5, before Firjan Auditor Marlos Correa da Costa Gomes outlined the new Brazilian Anti-Corruption legislation and its impact on the industry and on the Brazilian market. The new law is known as the Clean Company Act and  came into effect in 2014. It holds companies responsible for the corrupt acts of their employees and introduces strict liability for those offenses. Fines can be up to 20 percent of the company´s gross revenues, but the existence of a compliance program, and leniency agreements where the company chooses to cooperate with the authorities, can reduce the fines.

«The great challenge of the Brazilian anti-corruption law is the enforceability of an absolute duty of care for the companies. Especially for micro, small and medium sized businesses it should be noted that large multinationals require a compliance framework of its suppliers. These large companies will prioritize their hiring by companies committed to ethics and compliance. In this regard we can mention the new criteria adopted by Petrobras, which  requires all its supply chain to implement a integrity program under the Brazilian law. It is also necessary to mention that the main Brazilian banks and development agencies have adopted a compliance clause in their contracts, demanding that companies receiving subsidies have effective compliance structures», he said.

Mr. Orestis is an international anti-corruption and legal reform specialist with more than fourteen years experience in regulatory streamlining, judicial reform, SME development, anti-corruption, and increasing governmental transparency in the former Soviet Union, Europe, the Middle East and the United States. He talked about risk management and integrity due diligence at Statoil in his presentation:

Mr. Reynaldo Goto«Standards are higher than ever and eventually you will stumble upon misconduct of some kind. But you have to catch it before it becomes a pattern. The failure to implement internal controls or a meaningful compliance program can cost you, and if your compliance program is working, you should be able to catch it when it happens or shortly after», he said.

«Investing in compliance is worth the time and the effort. You have to understand where your risks are and know have to manage 3rd party risks», he said, and listed several recommended actions.

Before going into business with a supplier or partner you have to understand who you are doing business with, who they are and what they do. You need to risk assess the business relationship and decide a management plan. During the relationship you have to keep track on what they are doing and be careful not to miss any red flags. This is important to remember in the training of personel. When the relationship ends, you need to keep in mind that there is no statue of limitation on the UK bribery Act and you have to be prepared to answer for your actions if questions come up. This makes knowledge management and documentation important. It is also important to tie off loose ends, should there be any.

Prevention, detection and response are the three pillars that Mr. Reynaldo Goto is basing his daily work as a the top Compliance Officer of Siemens Brasil on.

Siemens was involved in a string of bribery scandals back in 2006.

«After taking immediate actions back in 2007 Siemens established a robust compliance system. We are not proud of this period, but we are proud of the system we have implemented now», he said. Mr. Goto outlined the Siemens compliance system, based on the three pillars of prevention, detection and response.

«Part of the compliance system is to motivate the employees and training, communication and preventive measures is the most important part of our system», he said.

Mr. Goto says that sales agents require a special attention in the oil and gas industry.

«The ones who offer to facilitate, speed up, intervene, the intermediaries. You need to understand the risks of the market you are operating in», Mr. Goto said.

Cross border cooperation
In a separate session, two attorneys in Law and partners at the Norwegian law firm Selmer talked about how they see the Lava Jato investigations and the fight against corruption from a Norwegian standpoint. Mr. Helge Kvamme and Mr. Thomas Brandi are both very experienced in the area of compliance and anti-corruption work and have even been called «corruption hunters» by Norwegian media.

«We have assisted several Norwegian companies affected by the Lava Jato investigations, and we do due diligence and conduct investigations for our clients. 75 percent of all corruption cases are related to third parties and many involve intermediaries», Mr. Brandi said.

Helge Kvamme explained how the Norwegian Økokrim, the National Authority for Investigation and Prosecution of Economic and Environmental Crime, works.

«Økokrim is currently conduction five or six investigations all over the world, and is also cooperating with the Lava Jato task force.» he said.

Companies operating in several markets around the world have to deal with several jurisdictions, regulations and expectations. Kvamme and Brandi have noted an increased focus on prevention and risk mitigation.

«There s also an reputational concern involved in these cases. The main challenge we see is that a lot of companies have good policies, but the big question is, are they effective? Training, monitoring and risk analysis where you dig deep to identify the risks, as well as third party due diligence seem to be key concepts. The best thing if you detect an incident yourself. That is the evidence of a good compliance policy», they say.

The closing remarks of the seminar were given by Mr. Bruno Brandão, representing Transparency International, who is establishing in Brazil.

«It is important that Brazilian business partners join forces to fight corruption. Norway is ranked number 5 on the TI index, while Brazil is ranked 76. This does not mean that corruption is in our DNA in Brazil but because Norwegian companies have understood that integrity is good for business and now business environment needs to take a leading role in promoting reforms and rebuilding the country», Mr. Brandão said.