A day to be proud of 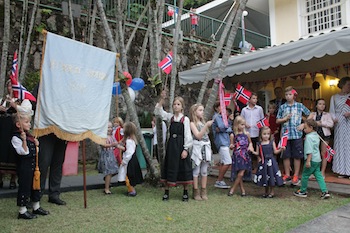 Despite the rainy weather, more than 200 people gathered to celebrate the Norwegian Constitution Day in the Norwegian Church in Rio de Janeiro on May 17, 2016.  IBP president Jorge Camargo was the keynote speaker at the traditional Norway Day business seminar earlier in the day.

«I remember the extreme happiness in the eyes of the children, the colorful traditional dresses called «bunad» and the flags. No one stays at home on May 17, and I remember how happy and proud people looked. In Norway, this is a day that belongs to the people, and mainly to the children and the experience increased our admiration for Norway», Jorge Camargo said in the introduction of his presentation to the breakfast seminar.

The top IBP executive lived in Stavanger when he worked at the Statoil headquarters and his close ties to Norway made him the ideal speaker at the breakfast seminar. The event is a joint effort by the NBCC and the Norwegian Consulate General in Rio de Janeiro and has become a tradition and important part of the celebrations of the Norwegian national day in Rio de Janeiro.

The importance of the celebrations was also something that Consul General Sissel Hodne Steen emphasized in her address to the party at Princess Ragnhild´s Church in Gávea.

The May 17 children´s parade.«This is particularly important when you are far away from home», she said. The Consul General even brought a greeting from the king and queen of Norway in her address.

Despite the rainy weather, the party at the Norwegian church in Gávea was a great success with about 200 participants. Traditional Norwegian «lapskaus» and hot dogs were served, as well as popsicles, as a kind of unwritten rule says that on May 17, children are allowed to eat as many popsicles as they want! A parade was also organized and a beauty salon and a inflatable slide were among the other attractions for the younger ones. Norwegian priest Anders Rosland was toastmaster and host of the party.

Almost 100 people started the celebrations on May 17 participating at the breakfast seminar that took place at the Hotel Windsor Atlántica in Rio de Janeiro.

From 2005-2009, keynote speaker Jorge Camargo was the country president of Statoil do Brasil. Since 2015 he is the president of IBP. As a result of the special bond Mr. Camargo has to Norway,  the Norwegian community in Rio «has adopted him as Norwegian», as Consul General Sissel Hodne Steen said when she introduced the keynote speaker.

«This is the most profound crisis in Brazil´s modern history. On top of the collapse of the oil price we have Petrobras at the epicenter of the crisis and the oil and gas industry has been hit very hard. The new government has a sense of urgency that I have never seen before and I believe they will try to do something fast», Mr. Camargo said.

The Serra project in Congress, which removes the operator obligation of Petrobras on pre-salt blocks, is on top of the IBP short term agenda, followed by new bidding rounds in unitization areas, the Repetro regime and a possible waiver clause in the local content requirements are other points on IBPs list. These measures would all contribute to boosting activities in the industry, currently at a historic low level.

«New bidding rounds could unlock 8-10 billion barrels of reserves and bring more than 100 billion USD in investments. Repetro is fundamental to the industry and we also believe that ANP should be able to have a waiver clause for items it is not possible to get in Brazil», he explains.

A lot of questions to answer.It is however necessary to have a long term approach to the cyclic oil and gas industry, and Jorge Camargo thinks we are about to enter a new cycle now. He does however foresee that the oil price will stay «low for longer».

«I see a convergence of the political mindset, of what has to be done. Even the former government was already moving in the right direction. Petrobras has a large divestment program on the way and this means opportunities for other players. At the same time, the fundamentals remain the same: Brazil has world class reserves to develop. The pre salt reserves are economically robust at an oil price of 50 USD a barrel», he said.

Not attractive enough
The IBP president compared the investments in the US shale oil to investments in pre salt developments and discussed how to attract more investments to Brazil, and called the failure in attracting investments a missed opportunity for turning the geologic wealth into economic wealth. The big question is how to make Brazil more attractive to investors. The attractiveness has been reduced by 42 percent according to numbers he showed, and Brazil currently only attracts about 5 percent of the participation of global investments.

«We need to simplify and adjust local content, and to allow multiple operators. Brazil is too big for one operator. We also need regulatory and tax stability, a streamlining of environmental licensing, a bid rounds calendar and we need to look at gas development. I believe we will see big changes and fast developments», Mr. Camargo stated

Shame and pride
In the debate that followed the presentation, Mr.Camargo received a lot of questions from the audience, and this reflects the great interest for the opinion of the IBP president on a series of matters. PT in opposition,  public-private partnerships, local content, ANP and Ibama, the struggling supply industry and the Lavajato investigations were all topics brought up by the audience.

«We feel ashamed, but also proud of the Lavajato investigations, because this is something we managed to do internally, we did not suffer pressure from the outside, but are sorting out our own mess using our own institutions, with a strong support of the Brazilian people. There is no way a new government can stop this and I am confident that stakeholders in both business and politics will learn from what we are going through. Change is needed because our political system is the mother of all this corruption, but hopefully we are now entering a cleaner cycle», Mr. Camargo said.

«There is never a boring day at work in Brazil, there is always something happening, and not always good things. But this it what makes it so interesting to work and live here. It is very useful and very reassuring to hear that there is a dialogue between the government and the IBP, he concluded.

The Norwegian Constitution Day was also celebrated in São Paulo.