A history of prosperity 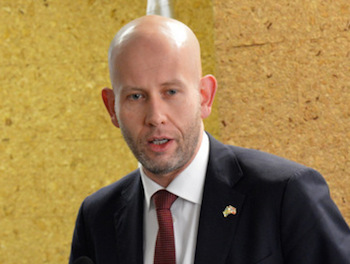 The Brazilian Ministry of Mines and Energy is currently working to increase the dialogue between different players of the oil and gas industry, with the purpose of identifying and building new policies that can help revitalize the Brazilian oil industry and promote the development of the pre-salt provinces. The Norwegian model of exploitation and production is often referred to as a good example, and the good relationship between the two countries is said to have contributed to the development of the sector.

In his remarks, Mr. Lien explained how the oil and gas industry still is Norway´s most important industry, after 50 years of activities on the Norwegian Continental shelf.

«The oil and gas industry requires clear, stable and predictable framework conditions, but stability is not the same as being static. We want to use a free market for the benefit of society as a whole. The main elements in our policy for the sector remain the same since 1975. This gives the necessary predictability for the companies», Mr. Lien said.

Other key words for the development of the Norwegian industry are competition and diversity of actors and national control and transparency. Norway managed to develop a competitive supply chain with an international presence today, and also has a strong commitment to research and development», the Norwegian minister said.

His Brazilian colleague Paulo Pedrosa expects that the oil and gas sector will play an important part in the transition that the Brazilian economy is going through. He also said that Norwegian policies should serve as an example.

«With the dialogue that we are establishing with Norway, we can see opportunities and reflect on how to create a favorable business environment for investments», Mr. Pedrosa said, according to a release on the website of the Ministry.

The Norwegian model
The seminar program was quite extensive, and also included segments on the Norwegian model of the O&G Industry and lessons learned, on how to manage the transition in the Brazilian O&G industry and on how Brazil can build a competitive supply industry.

«Local content policies should be temporary and should aim at increasing value added, not denting investments», she said.

Mr. Kjetil Solbrække, Senior VP of Rystad Energy South America also talked about key elements in the Norwegian experience and how it is difficult to copy. He outlined differences in the fiscal regimes of Norway and Brazil, and suggested that simplifying the tax system is something Brazil should consider.

«Diversity of operators was also a key parameter for the development of the Norwegian Continental Shelf», Mr. Solbrække said in his presentation.

Secretary for Oil and Energy in the Ministry of Mines and Energy, Mr. Márcio Felix talked about the ongoing changes in the Brazilian regulatory framework. New bidding rounds will take place in 2017, according to Mr. Felix.

«The federal government is promoting a framework review toward a more stable and economically rational environment», he said.

The lack of competitiveness of the Brazilian industry and the new competitive agenda of the industry was something Mr. Guimarães focused on.

Statoil has a short term intent of resetting cost in Brazil, while the long term intent is profitable growth. Mrs. Coelho also talked about Peregrino and the pre-salt assets in Statoil´s portfolio.

«These are world class assets and we are building for the future», Verônica Coelho said.

«The increasing local content requirements demanded that Aker Solutions expanded in Brazil», she said and presented the new and modern Subsea High Tech Center in Sao José dos Pinhais. Mrs. Peralta also talked about the importance of critical partnerships in the value chain.

In his presentation, Mr. Bomfim said that the Brazilian subsea industry already has demonstrated the capability to face challenges.

«We have the capacity and capability to do even more. This is an industry with a huge potential» he said.

Mr. Ringseth outlined the different opportunities for Norwegian financing in the oil and gas sector.

A panel debate closed the seminar before the participants had a light lunch and the opportunity for further networking. NBCC president Erik Hannisdal gave the closing remarks to the event.

The seminar was organized by The Ministry of Mines and Energy, the Norwegian Embassy, IBP and NBCC.

The purpose was to strengthen the Norwegian Brazilian relations even further and also exchange experiences and ideas on local content, regulation and R&D.

A history of prosperity – Brasilia event