A new move on Nor-Shipping 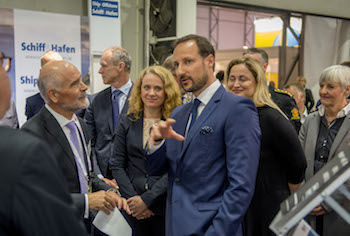 The 26th edition of Nor-Shipping was formally opened in the presence of HRH Crown Prince Haakon of Norway on May 30, 2017.

35.000 visitors from 80 countries were expected to the Nor-Shipping exhibition and seminars this week, and numerous events are dedicated to Brazil. For the 60 people strong Brazilian delegation, Nor-Shipping started on May 29, when the delegation was among the guests invited to a mayoral reception in Oslo City Hall. In the evening, Brazil´s ambassador to Norway, Mr. George Monteiro Prata, hosted a welcoming party in his residence.

DID YOU KNOW? On May 29, 2017, the chambers of commerce in Brazil and Norway signed a Memorandum of Understanding. The ambition is to cooperate even closer in the future.

Second time around
It is the second time that NBCC is present at Nor-shipping. Together with Abran and Norwegian Shipowners´Association as the main organizers – with the support of BNCC, Innovation Norway and The Norwegian Consulate General in Rio de Janeiro, the chamber took part in organizing the program of activities for the Brazilian participants at the global maritime event, taking place in Oslo this week.

This is the 26th edition of the event, making it  the longest running event of its kind in the world. Norway is also considered a global maritime hub, in control of the fifth largest merchant fleet in the world. Nor-Shipping is the largest such event of the year, not only in Scandinavia, but also in Europe.

While Oslo felt more like winter two years ago, the delegates received a much warmer welcome this time. The sun was shining and it was more than 20 degrees Celsius in the Norwegian capital this Monday.

Nor-Shipping director Birgit Liodden is excited with the heavy Brazilian presence and describes Brazil as a «breath-taking market abundant in potential, resources and opportunities».

«Brazilian-Norwegian relations in the offshore industry are very important, and we believe Brazil is a market in development. The feedback on the Brazil seminars is great and many wish to participate.»

It is also the second time that Nor-Shipping organizes a session dedicated to Brazil. This year, like in 2015, pitfalls and obstacles of the Brazilian industry landscape is on the agenda.

«The Norwegian offshore presence in Brazil is strong, and when we invite the world back to our playground here in Oslo, it is only natural to put Brazil and our relations on the map», Mrs. Liodden told NBCC during the city hall reception on May 29.

«It is a pleasure to welcome you to Oslo. Nor-shipping is important to Oslo and to the whole maritime industry in Norway, and you are our special guests», Oslo Mayor Marianne Borgen said in her address to the welcoming event. Deputy Minister Dilek Ayhan,  CEO of Siem Industries, Kristian Siem and president of DLV GL, Remi Eriksen were among some of the many distinguished guests.

Across the oceans
Close to 1000 exhibitors are present at Nor-Shipping 2017 and 21 national pavilions are part of the exhibition. Several NBCC member companies and other Norwegian companies active in Brazil, were represented at the exhibition with their own stands.

The participation demonstrates the importance of Nor-Shipping to Brazil and Brazil to Nor-Shipping, and NBCC president Rachid Felix hope the Brazilian presence will contribute to greater understanding.

«It is important for to show the world how Brazil is handling the challenges of the downturn of the offshore industry around the globe and demonstrate what opportunities that are still to find in Brazil. I am happy to see that Brazil is considered an important partner for maritime business in Norway. Our two countries have cooperated for centuries and I think the destiny of the Norwegian and the Brazilian maritime offshore sector is linked together and will continue like this for many decades to come», he says.

«We look at Norway as a potential investor in our country, and Norway has a consolidated position in the global maritime sector, with a lot of shipowners and other important stakeholders. We would obviously like to strengthen our ties to Norway and Nor-Shipping is an arena for networking where you meet people from different segments of this industry, both shipowners, people from insurance, R&D and so on. Brazil is currently going through some difficulties, but I am convinced that we will overcome these challenges. Now we want to look forward, and the best way forward is across the oceans. This is how we get closer and build stronger relations to other countries», Vice-Admiral Lima Filho says.

During the reception in the Embassy residence, BNCC president Harald Martinsen was awarded the Order of Rio Branco, by Ambassador George Prata.