A taste of Norwegian X-mas 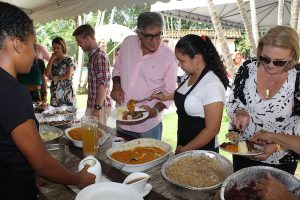 The traditional Christmas party for the NBCC family took place on December 9, 2017, with more than 130 people present. See the photos!

The traditional Christmas party for the NBCC family took place on December 9, 2017, with more than 130 people present. See the photos!This year´s Christmas lunch could however be the start of a whole new tradition, as the event for the very first time was co-organized by NBCC, the Norwegian Church in Rio de Janeiro and by the association «Norsk i Rio».

The organizers had promised the guests a taste of Norwegian Christmas, with traditional food that Norwegians eat for the holiday on the  menu, as well as other Christmas traditions. Chaplain Sjur Henrik Askjer and his wife Margunn were the hosts of the event, and the guests represented a great mix of both Norwegians and Brazilians, most with close connections to Norwegian-Brazilian companies in Rio de Janeiro. 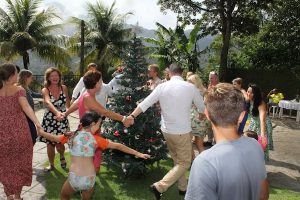 The Christmas lunch took place in the Norwegian Church in Gávea, and on the menu you found things like «ribbe», pork ribs, «pinnekjøtt», lamb ribs,«surkål», sauerkraut and «rødkål», red cabbage. For the Norwegians, the traditional meal definitely tasted like home, while the Brazilian guests also seemed to enjoy the food – or at least the experience.

Christmas decorated brigadeiros, popsicles and «riskrem» with red sauce, a kind of sweet rice porridge with cream, was served for dessert. In other words – something for every taste.

NBCC president Rachid Felix was present with his wife Ruth. 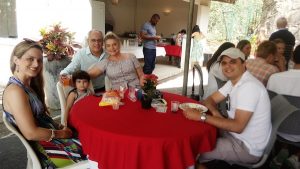 «It was very, very nice and very interesting. It means a lot to us to see how the Norwegian community comes together and works to keep their traditions alive, with the typical and interesting food. I believe this is actually quite simple food, like we are used to from countryside here in Brazil as well. It was the first time I had a Norwegian Christmas lunch, but the food, the pork and the lamb, is basically the same as they eat in Minas Gerais and Goias», he said jokingly.

Mr. Felix was happy to see so many families at the event, and also to see how well everyone got along.

«There are many Brazilians among the Norwegians in Brazil, friends, wives, husbands, children, and here we have managed to gather a lot of them. The heat and the sun is maybe the most Brazilian ingredient here today.»

He expressed optimism when looking towards 2018.

«2017 was a very difficult year, as it was the consolidation of a very tough crisis, both globally and nationally. Now we are seeing a recovery of the economy, internationally we note many positive signs, and some important structural changes have taken place here in Brazil. I think the Brazilian society is engaged in changing. On behalf of NBCC, where a majority of the associates have connections to the energy sector, I am also very optimistic and we expect to see a new boost. 2018 will probably still be a preparation for future growth, but investments will return», Mr. Felix says. 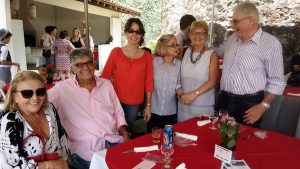 About 30 children were among the guests, and they helped turn the event into a pool party, as they did last year and the year before.  When Santa Claus showed up, the children lined up to receive their presents, some more wary than others, but all of them full of expectations.

Although the hot December sun, the pool and monkeys in the palm trees that surround the church rarely are ingredients of a Norwegian Christmas celebrations, the event managed to mix the best of two cultures, and you could definitely say that it contributed to strengthening the relations between Norwegians and Brazilians event further.