A venue for firming strategic partnerships 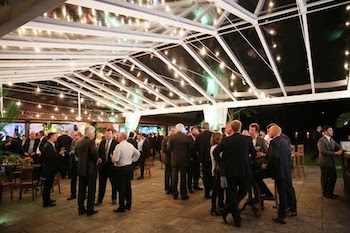 550 guests at NBCC Networking Dinner during Rio Oil & Gas 2016. See the photos below!

CEOs and ministers, local authority representatives, industry executives, top lawyers and respected researchers. They were all among the 550 guests gathered at the traditional NBCC Rio Oil & Gas Networking Dinner, on October 26, 2016.

During the 18th edition of Rio Oil & Gas Expo and Conference, considered Latin Americas leading event of its kind, finding pathways to recovery of an industry in crisis was a recurrent topic, and players currently seek to position themselves and strengthen important partnerships while waiting for better times.

The place many important stakeholders chose to come together to firm existing alliances and maybe even form new partnerships was of course the NBCC Rio Oil & Gas Networking dinner, that took place in the elegant surroundings of Itanhangá Golf Club. One of the highlights of this year´s event was a Norwegian-Brazilian theme bar where half of the room had buteco-style and samba-inspired decoration while the bar in the other half of the room used elements from the bacalhau trade – and of course served aquavit.

SEE ALL THE PHOTOS FROM THE EVENT HERE.

A priority market
Bilateral relations to Brazil, that started with the trade of bacalhau for coffee back in 1842, is a priority to the Norwegian authorities and the government was represented by Deputy Minister Ingvil Smines Tybring-Gjedde of the Norwegian Ministry of Petroleum and Energy. During her three day stay in Rio de Janeiro, she also met with BNDES president Maria Silvia Bastos Marques, with FINEP and other important stakeholders.

«It is important for the Norwegian government to show that we will not turn our back on Brazil. Norwegian authorities are well aware of the fact that Brazil is the second biggest market to the Norwegian supply and service industry, and this is why we are here. I hope we can contribute to opening some doors and further strengthen the good relations we have with our Brazilian friends. Providing arenas where the industry can meet and strengthen their networks, maybe even meet new potential business partners, is very important. In an event like this you also have access to people that are normally out of reach or difficult to schedule a meeting with», Deputy Minister Ingvil Smines Tybring-Gjedde says.

It was the 6th time NBCC host the attractive networking dinner during Rio Oil & Gas, and during this year´s event, NBCC took the opportunity to launch its new logo. This year´s setting is in many ways different from 2014. Two years ago, the oil price was 114 USD a barrel. Today a barrel is worth less than half of this. NBCC president Erik Hannisdal is however proud to host what is considered the most important networking event during Rio Oil and Gas, and very happy to receive Deputy Minister Tybring-Gjedde as the guest of honor.

«It is important that the Brazilian oil and gas industry sees Norway as a strong partner. Our ambition is to provide a setting where people have time to meet and talk. Hopefully they will start conversations that they can wrap up in a meeting room in the future. The guest list is proof that the event is attractive for many important players.», Mr. Hannisdal says.

Creme de la creme
Among the many high profiled guests were Marcelo Haddad, CEO of Rio Negócios and Director of the Petroleum department in Brazil´s Ministry of Mines and Energy, Márcio Felix.

«Norway is a reference when it comes to sustainable development of the oil industry. In recent years our relations have become closer, and the more recent contact as a result of Statoil´s investments and the presence of the Norwegian supply and service industry in Brazil. NBCC represents this union between Norway and Brazil and I am very happy to be here tonight. Brazilian authorities hope that cooperation between our two countries intensifies and that we can learn from each other. We would like to learn how to be as innovative and responsible when it comes to recovery rates as Norway is. We have to learn how to generate wealth and opportunities for our population», he says.

«The Brazilian oil industry is always paying attention to what Norway is doing. The results you have achieved, in order to guarantee the future of the Norwegian population, impresses us», she says.

«I think this event organized by the NBCC is probably the most important event in terms of networking. We have been able to attract the «creme de la creme» of the industry, and it´s an opportunity for people to discuss joint ventures and opportunities of doing business together. Now is the moment to do these things, because the industry is going to grow again and people have to take advantage at an early stage. Later on the good players will all be taken», Mr. Veirano says.

His advice to struggling companies is to hold back.

«I have seen companies that have abandoned Brazil when we have had crisis. Coming back they pay a much higher price of reentry», he says.

Maria Peralta, Head of Subsea in Aker Solutions, suggests that the industry uses the next year to prepare the ground for better times in 2018.

«Brazil is still a promising market, but in Aker Solutions we do not believe in improvements in 2017. Our ambition is to be a more efficient and more prepared when growth returns», she says.

New partners
Statoil´s recent acquisition of the Carcará-field from Petrobras sent an important signal to the market, and Statoil´s Country Manager in Brazil, Mr. Pål Eitrheim, was the man of the moment during this year´s Rio Oil & Gas.

In September, Statoil CEO Eldar Sætre met with Brazilian president Michel Temer. Now we are seeing important changes in the political scenario as several regulations are being eased.

«The Carcará acquisition was in fact the first big transaction in a long time, and I think it sends an important signal to the industry that Brazil is still a market with interesting business opportunities. The ongoing debate on the framework conditions of our industry is very positive, but I don´t think Statoil has any merit here. I do however believe that the discussions are important to the market. Brazil needs to look at the local content regulations and at the tax system, and I believe that Brazilian authorities have realized that the Brazilian oil and gas industry is in fact competing for resources that are scarce in a global market. The need to adjust to win the competition and become more attractive to investors.»

Lincoln Rumenos Guardado, CEO of Queiroz Galvao Exploraton and Production, was among the many business partners that Mr. Eitrheim met at the NBCC event.

Mr. Guardado says he looks forward to cooperating with Statoil on the Carcará-field, where QGEP is one of the partners. He is happy to express his admiration for Norwegian business partners

«Norwegian companies are extremely competent in what they do and the way they work in Brazil. I believe that the Norwegian technology and Norwegian contributions is and has been fundamental in the process that has made the Brazilian oil and gas sector what it is today, in a global perspective. For my company, this relation has become even closer with Statoil´s acquisition and we will work closely together», he says.

Newcomers
Several business seminars were also held during the Rio Oil & Gas week, and Innovation Norway was the host of the Norwegian pavilion at the international oil and gas event for the 10th time this year.

17 companies were present as exhibitors at the pavilion. Light Structures, a company providing structure monitoring systems for FPSOs and other floating installations, is taking the first steps to establish in the Brazilian market and was present at Rio Oil & Gas for the first time this year.

«We believe that timing is right. We are seeing changes, both on government level and within Petrobras that will make the Brazilian market easier. The obstacles that international companies had to face, are smaller than before. We have entered into an agreement with a Brazilian company offering products complementary to ours», says Inge C. Paulsen, CEO of Light Structures, who has ambitions to sign the first contract in 2017.

«There is a different kind of optimism in the air. I am satisfied that Norway was present with a pavilion although this year´s exhibition was smaller than earlier years. It is an important signal to the Brazilian market. Everyone I have met with during my stay, says that Brazil and Petrobras is now handling the challenges they are faced with, and they believe in improvements. The federal government is also showing commitment», the Deputy Minister says.

Intsok organized a seminar on life extension of offshore installations. ABRAN hosted a seminar on the transitions in the oil and gas industry, in close cooperation with FGV Law School. Innovation Norway and GCE Subsea also organized a breakfast event offering a new look at the Brazilian oil and gas scenario.