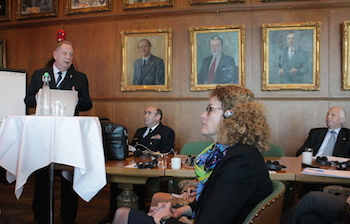 The regulatory and legal aspects of the Brazilian maritime industry were discussed in a seminar organized by Abran and NSA during Nor-Shipping in Oslo, Norway on June 4, 2015.

The legal seminar was part of the official Brazil@Norshipping program at Nor-Shipping 2015, a bianual maritime event taking place in the Norwegian capital from June 1-5, 2015.

The seminar featured presentations by the president of the Norwegian Shipowners´ Association, Mr. Lars Peder Solstad, Vice-Admiral Claudio Portugal de Viveiros, the director of Ports and Coasts (DPC) in Brazil, Vice-Admiral Marcos Nunes de Miranda, the president of the Brazilian Maritime Court and Mr. Olav Akselsen, Director General of the Norwegian Maritime Authority, among many others. It was also the first time that Brazilian Naval authorities and Norwegian maritime authorities came together and had the chance to exchange ideas and experiences on jurisdictions and regulations. About 50 people were present for the legal seminar.

«The Brazil@Norshipping program is a reflection of the Brazilian market, and of our strong and long-lasting friendship. The Brazil seminars were an important part of the Nor-Shipping agenda. Brazil is a strategic and long-term partner to Norway. Several steps are being taken to strengthen our partnership further, and Norwegian companies are well positioned to continue to play a key role in the developments in Brazil», NSA president Lars Peder Solstad said in his opening remarks to the seminar.

Mr. Lars Peder Solstad.
The Blue Amazon
In the first session, Vice-Admirals Claudio Portugal de Viveiros and Marcos Nunes de Miranda outlined the responsibilities of the Brazilian Navy, as the superior maritime authority of the country. Brazil has 8500 kilometers of coastline and a continental shelf of 950.000 km2.

«Our responsibility is to ensure the safety of all waterway navigation in Brazil, to implement and monitor the fulfillment of laws and regulations and also to prevent pollution by vessels, platforms and support facilities. We perform inspection, establish regulations and safety requirements. The list of tasks is long and we don´t get bored», Vice-Admiral Viveiros said.

The sea is of great importance to Brazil. 91 percent of today´s oil production comes from the sea, and the Brazilian Navy is following the traffic of 1200 merchant vessels in Brazilian waters, on average, every single day.

«The whole world is aware of the importance of the Amazon forest. The sea is also very important, and in order to increase people´s conscience, we call it the Blue Amazon. Energy, fishing, tourism, research, biodiversity, the fields of activities in Brazilian waters are several», Vice-Admiral Viveiros said.

The Brazilian Maritime Court is an autonomous federal body with the jurisdiction to judge accidents and navigations casualties in Brazil. The Court is also responsible for providing the certificate of registry of Brazilian shipowners and Brazilian flag vessels. The court has a president and six specialized judges.

«Baden was a German ship that left the Guanabara Bay without authorization. As a result, fire was opened against the ship and 20 seamen died. As no maritime court existed in Brazil at the time, the case was judged by a German court», Vice-Admiral Miranda said.

He also outlined the process of the court, from investigations to the final decision. Any vessels of any flag within Brazilian waters, including rigs, recreational boats and research vessels fall within the court´s jurisdiction. The accident of the FPSO owned by BW Offshore earlier this year, will eventually reach the Brazilian Maritime Court.

«All facts that put humans or goods in danger fall within the jurisdiction of the court, from a canoe loaded with bananas on the Amazon river to serious accidents on offshore platforms. A case can only be judged in a civil court after the maritime court has reached a decision. This increases our responsibility», Vice-Admiral Miranda explained.

In his presentation, Mr. Akselsen explained the responsibilities of the Norwegian regulatory body. The focus on international standards and regulations, and on green initiatives was highlighted.

«Our role is mainly related to flag state issues on mobile offshore units and offshore vessels. We also develop rules and regulations for the sector, but these are largely based on international regulations. We play an active role in international foras. I find it important to underline that the industry itself also plays an important role when it comes to the development of new standards on safety and environment», he said.

Competence and training is another important focus area to Norwegian authorities, and standards on training are high. In Brazil, regulations and standards on training is the responsibility of the Navy. In a panel debate following the individual presentations of the first session, Vice-Admiral Viveiros stated that in terms of quantity, the needs of the Brazilian market are being matched. He would however like to to improve quality of the training offered, and welcomes closer collaboration with Norway.

Mrs. Skard talked about the long term policies and challenges for growth of the Norwegian maritime industry. A new, governmental maritime strategy was recently launched, and Norwegian authorities are also working on a bilateral maritime agreement with Brazil. Brazil is the most important market in South America for Norwegian shipping services. Training and education is a priority to the Ministry.

«Maritime competence is one of the strengths of the Norwegian maritime clusters. Seafarers are a key factor in producing safe and successful operations, especially on highly specialized vessels. Our bilateral relations in the maritime sector are important and we wish to expand them. The possibilities to increase cooperation on maritime competence and education is something we are working on, and we are receiving Brazilian exchange students every year», Mrs. Ida Skard said.

She outlined the legal framework of the sector, explaining that only BSCs are allowed to operate support vessels in Brazil, and only a BSC can charter such vessels. They also have priority and access to financing. But the requirements are many: The company has to own at least one Brazilian flagged vessel and of course need an authorization from Antaq. Mrs. Shaefer also explained how the Brazilian market gives preference to Brazilian flag vessels. It is only in the lack of a national vessel, that Antaq will authorize the chartering of a foreign OSV.

Mrs. Shaefer´s presentation was followed by that of Joana Bousquet, Legal Councel of BG in Brazil who talked about the Brazilian regulations for transshipment. BG is currently doing this in Uruguay, but recently signed a contract with the Açu Port in Rio de Janeiro for doing transshipment operations in Brazilian waters. Such operations are regulated by environmental regulatory bodies, by Brazilian port authorities, by Antaq and ANP.

«A challenge that we experience, is that the Brazilian market is very used to doing business with Petrobas. Now new companies are entering the market, and they are in the strong need of services. There are no Brazilian vessels with the equipment we need, so we charter foreign vessels», she said.

Christine Rødseter, partner at Norwegian law firm Simonsen Vogt Wiig, talked about the Norwegian cluster model, and how the clusters have triggered innovation in Norway. The CCE Blue Cluster in Sunnmøre, Western Norway, is one of the most complete maritime clusters in the world.

According to Brazilian judge Fernando Viana, the Brazilian justice system is showing autonomy in the way the investigation of the Petrobras corruption case is being handled.

The MACN is a platform for businesses across industries to contribute to the elimination of corrupt practices. The platform is based on the UK Bribery Act from 2010, and offers different work tools to the participating companies and organizations.

«NSA supports the vision and mission of MACN by promoting good practices among our members», NSA attorney Karoline Bøhler said in her presentation.

«The topic of this seminar is of great importance. Regulatory framework plays a major role and is a prerequisite for doing business and making investments. They regulate HSE, training and education and innovation and R&D. At the same time we call for stable, predictable regulations based on international standards that are easy to implement and to comply with. It is very timely that Brazil was this present at Nor-Shipping this year and shows the good fit we have between Norway and Brazil», she said in her address to the event.