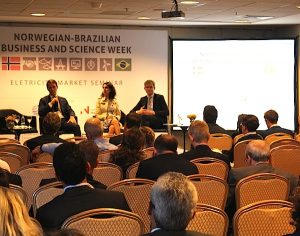 Brazil´s resource potential for «new renewables» is vast and Norwegian stakeholders are looking to expand their footprint in Brazil.

The Brazilian electricity market is expected to grow significantly in the coming years, and Brazil has extremely favorable conditions for many different sources of electricity generation. On November 7, 2016, a seminar on the Electricity Market took place in Rio de Janeiro, as part of the Norwegian-Brazilian Business and Science Week. The event brought together industry players from Norway and Brazil to discuss market opportunities, bottlenecks and develop greater cooperation between the two countries. Norway´s Deputy Minister of the Ministry of Petroleum and Energy, Mrs. Ingvil Smines Tybring-Gjedde, was in Brazil for the business week which featured 14 different events in 4 Brazilian cities, and it was the Deputy Minister who opened the electricity seminar on November 7, 2017. 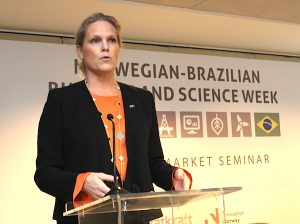 «Like Brazil, Norway is also a big hydropower producer, and although Brazil in size is closer to the entire European market, I think there are lessons we can learn from each other, and I am glad that Statkraft has an active presence here. Hydropower has been a tremendous benefit to our economic development, and Norway is an important source of energy for European consumers. Half of Europe´s reservoirs are actually in Norway. We have long traditions for cooperation, and the market is increasingly integrated with the European market», she said.

Statkraft is actually the largest producer of renewable energy in Europe, and South America is also an important hub for the company. The business strategy for Brazil is expanding the footprint, and in his keynote, Jürgen Tzschoppe, Executive Vice President for International Power of Statkraft, shared the company´s view on opportunities in Brazil and also talked about the trends in the power industry. In Brazil, Statkraft produces 1,5 TWH per year, and according to Mr. Tzschoppe, the current portfolio provides a platform for the company to grow in renewable technologies. He identified the strong growth in solar and wind power, the electrification of new sectors, the demand growth in emerging markets and the increase in local generation and storage as trends that will transform the power industry. 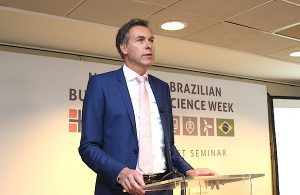 «Expansion in Brazil is led by renewables and new capacity will come mainly in wind and solar, but competition is strong, and looking forward, I believe acquisition opportunities will be driven by ongoing industry consolidation and privatization», Mr. Tzschoppe said.

EPE is a governmental agency conducting studies for the energy sector, linked to Ministry of Mines and Energy, and EPE-president Mr. Luiz Augusto Barroso believes the Brazilian power sector is well prepared to integrate solar and wind power in the current market, dominated by hydro power.

«The new renewables are geographically complementary, they have a shorter construction time than traditional power plants, and the current system is well adapted to absorb inherent fluctuations in the power generation from renewables. It is a good fit», he said to the seminar 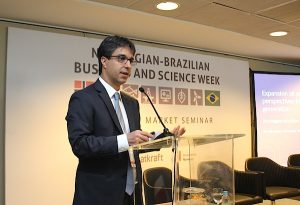 Mr. Barroso also presented business models to develop renewables and how electricity trading in Brazil is organized. He talked about subsidies and incentives, and outlined the ten year expansion plan of the Brazilian government, and how Brazilian authorities will work towards a low carbon energy matrix.

Separate sessions were dedicated to wind, solar and to electricity trading.

The Wind Session was opened by Elbia Gannoum, CEO of ABE Eolica, a private association that works to increase investments in wind energy in Brazil 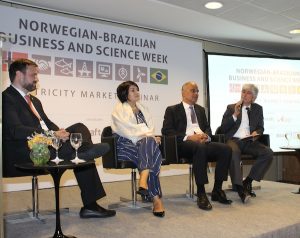 «Financing, transmission and demand are the main challenges as we see it, and we depend on the political and economic scenario of the country, but I am very proud that Brazil is now ranked number 9 in installed capacity, despite the economic scenario in Brazil the last years. Brazil also has the best capacity factor in the world, 70 percent higher than world average, and this is why wind is so competitive here», she said.

«Although they were initially made feasible with the help of incentive mechanisms, today´s wind and solar sources have become competitive», Edson Luiz da Silva, Chief Strategy and Regulation Officer of Engie Brasil Energia, said in his presentation. He also talked about the challenges in face of high renewable penetration in the market, like the uncertainty and variability of the generation, increasing the need for a flexible market.

Fernando de Lapuerta, CEO and country manager of Statkraft Brasil, shared experiences from the Fosen Wind Farm in Norway. The construction of transmission lines and access roads were among the challenges Statkraft had to face here. 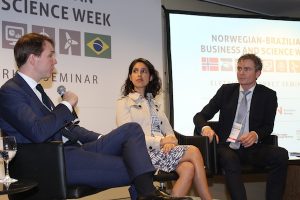 Camilla Ramos, board member of ABSolar, was the first speaker of the Solar Session. Brazil has the resource potential of joining the top 10 ranking, and Mrs. Ramos expect a considerable growth until 2040. According to estimates 32 % of the energy matrix will be solar in 2040.

Axel Holmberg, representing Scatec Solar, a Norwegian developer and operator of solar plants around the world, said that partnerships and financing are key factors to success.

«Scatec Solar wants to grow on the solar stage in Brazil», he said. Recently, Scatec entered into a joint venture with Statoil on the Apodi development in Ceara, which will start production in 2Q 2018.

The last session of the seminar was dedicated to electricity trading and related challenges in Brazil and in Europe. From a trading point of view, there are plenty of opportunities in Brazil, but transparency and a regulatory review is needed, the speakers argued. 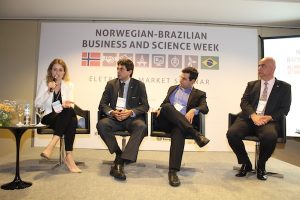 Statkraft is among the top 10 trading companies in Brazil, and Mrs. Fabiana Polido, Commercial & Trading Manager at Statkraft, was one of the speakers, together with  Mr. Alexandre Lopes of Associação Brasileira dos Commercializadores de Energia, Mr. Bernardo Bezerra of PSR and Mr. Victor Kodja of Balcao Brasilieira de Comercialização de Energia.

The closing remarks to the seminar were given by Mrs. Fabiola Sena, Statkraft´s Director for Regulatory Affairs: «Our intention here today was to bring different players together and prepare the grounds for even greater cooperation», Mrs. Sena said.