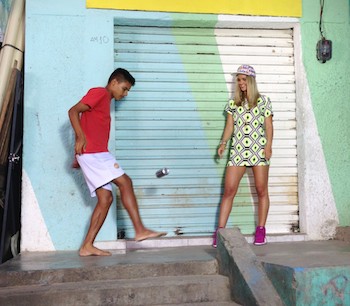 Players from a social project of Hydro in Pará participated in the shooting of the video clip of the hit “Olé”, part of the official FIFA album for the 2014 World Cup.

In the beginning of May, people living in the Dona Marta community in Rio de Janeiro, a community that has received global celebrities such as Madonna and Michael Jackson, stopped to see a 17-year-old Norwegian singer with a name that may be easily compared with another great artist: Adelén. Famous in Norway, Spain, Switzerland and many other European countries, she chose Rio de Janeiro as the venue for the promotional music video of the song “Olé”, part of the official soundtrack of the 2014 FIFA World Cup The music video is directed by one of the greatest experts in the area, Ray Kay, who has worked with artists like Lady Gaga, Beyoncé, Cher, Justin Bieber and Britney Spears.

From Barcarena to Rio
During the video shooting in Rio de Janeiro, Adelén showed intimacy not only with the community, but also with the ball, as she played football with some of the players who participated in the video. One of them has the name of a celebrity: Mel Gibson is 17 years old and travelled a long way to appear in the video with Adelén.

“I am very happy with this opportunity of acting with her and with everything I’m experiencing”, he said. Mel, as people call him, came all the way from Barcarena, in the state of Pará. He and seven other players from the team Alunorte Rain Forest, a part of the Hydro social project “Bola pra Frente, Educação pra Gente” were invited to join the party. In one of the scenes where he appears, Mel interacted with the singer by playing with a can of the project “Infinite Aluminium”, created to make the population aware of the importance of recycling.

“The Alunorte Rain Forest team is quite well known in Oslo, where they have participate in the Norway Cup in July every year. With this exposure, we intend to overcome new barriers and gain even more recognition. Other cities or countries might find inspiration in the program”, says the team coach, Alberto Muller, who followed the kids during the recording of the video clip.

Infinite Aluminium
The project “Infinite Aluminium” was launched by Hydro in 2013, with the purpose of stimulating the population’s awareness on recycling and also informing them about the importance of aluminum for a more viable future for this and for future generations. Hydro has defined it as a mission to contribute to creating a more viable society through the rational use of natural resources.

One of the main actions of the project is the distribution of cans with mango juice and informative flyers about the properties of the metal. The distribution of cans creates a closer relation between the company, its product and the community and increases the understanding and participation of society in relation to aluminum recycling.

“The fact that our society is not totally involved with recycling yet, gives us the opportunity of bringing awareness on this important practice, which also generates income for the groups of collectors. The implementation of a project of this caliber in Brazil, a country that is record breaker in the recycling of cans since 2001, is essential”, says Andreia Reis, head of Institutional Relations and Communications of Hydro.