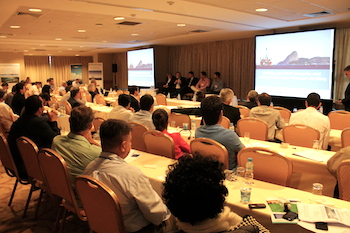 From the left: Carlos Cabral (ANP), Umberto Borges (Petrobras), Eduardo Galletti and Leonardo Maluf (both Statoil)Drilling and well integrity, safety and managed pressure drilling were topics discussed during a seminar organized by DNV GL on May 13, 2015.

The seminar was co-hosted by Innovation Norway, Intsok and Marine Cybernetics, and attracted more than 50 people. According to Alex Imperial, the regional manager of South America at DNV GL O&G, the current scenario represents an opportune moment to talk about drilling and well integrity.

«The quest for increased productivity is a global tendency, and new technologies are being used as enhancers and enablers to facilitate access. We do however have to address risk at all time, and despite improvements, accidents still happen. The size of the Brazilian exploratory program and the high number of wells to be drilled as well as the high complexity of these wells, also makes it relevant to discuss drilling and well integrity, and DNV GL would like to contribute to stimulating discussions on technologies and new ideas that can help us overcome challenges and reach our goals», Mr. Imperial said in his opening remarks to the seminar.

Stricter regulations
Carlos Agenor Onofre Cabral, representing the Brazilian Petroleum Agency ANP, outlined the new regulations on well integrity under development by the agency – a regulation of and for the Brazilian people, according to Mr. Cabral.

Accidents like the Montara blowout in Australia in 2009, the Macondo blowout in 2010 and incidents at Frade and Roncador in 2011 and 2012 motivated the elaborations of a new set of regulations.

«We saw the need for improving the management of well integrity. Specifically in drilling activities,the human factor will always impact a risk situation and people need to be prepared in order to take the correct steps. ANP has increased its competence on this area (drilling) and is revising the regulations. The new regulations introduce the need for close verification of critical well projects, a stricter audit of projects and its implementations, a more complete risk evaluation and the establishment of the well barriers through the well life cicle . The new regulations also demand a tighter follow-up of well integrity to eliminate operational safety gaps. The demand for capacity building and training as well as documentation will increase», Mr. Cabral explained.

The new regulations are expected to enter into effect in September this year, according to the ANP official.

The next five years, Petrobras expect to drill, complete, intervene in or abandon more than 2000 new wells, either exploratory or development wells.

«To accomplish this, safety is a must, and our focus is how to do this in a safe manner. A strong corporate safety culture is a key factor and robust emergency response plans must be in place», he said before outlining the challenges that Petrobras expect to be facing. The high demand for qualified personnel, regulatory and environmental restrictions are among these challenges.

«As mentioned by other speakers, we learn from major accidents. The Piper Alpha accident in the North Sea in 1988, that killed 167 men, was an eyeopener to the industry In Norway, and the Snorre incident in 2004 became a paradigm shift to Statoil.

«Huge steps were taken. We have significantly improved well integrity management as well as our understanding of the risk picture. A lot of major accidents happen during drilling and well operations. The industry can never relax», Mr. Galletti said, quoting former director of the Norwegian Petroleum Directorate, Magne Ognedal.

While well integrity management in Norway is «on cruise speed», the Statoil organization in Brazil is still accelerating to reach the same level on the Peregrino field, Leonardo Maluf said.

Cost savings
During the morning session of the seminar,

This risk based methodology could bring significants savings in rig time and costs, and is based on changing focus from the current zero leakage requirement to a zero harm for the environment standard.

He also outlined the DNV GL drilling and well services, in areas like well and component verification, structural well integrity, operations and risk management and Plug and Abandonment (P&A).

«There are problems related to conventional drilling, uncertainties that have to do with pressure, ballooning, loss of circulation, resulting in limited operational windows. Managed Pressure Drilling embrace various techniques that can reduce risk in the drilling process», he said, outlining techniques like Applied Back Pressure and Mud Cap drilling.

The afternoon session was of a more technical character, detailing different technologies, experiences and developments.