An industry craving for good news 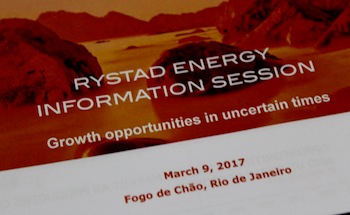 The global oil market is healing, but an unexpected surge of US shale will delay recovery, according to analysts at Rystad Energy.

It is only natural that in uncertain times, companies seek information, read macro-economic analyses and oil price predictions with great interest.

So when the international oil and gas consulting and business intelligence firm Rystad Energy invited representatives of the oil and gas industry for drinks, dinner at a fancy Brazilian churrasco restaurant and what they called an information session, both the interest and the expectations were high.

Rystad Energy established in Brazil in 2015 and CEO Jarand Rystad has on several occasions described Brazil as the next big growth nation, with huge undeveloped offshore fields.

The event took place at Fogo de Chão in Rio de Janeiro on March 9, 2017, and in the invitation, Rystad Energy promised presentations and discussions on the latest industry developments.

To the more than 130 people present, Head of the Rio office and Senior Vice President of South America, Kjetil Solbrække, talked about the fantastic growth potential he sees in Brazil.

«But this growth does not come by itself. It depends on how the Brazilian government will handle regulations of local content and the Repetro regime, and we do not have all the time in the world. It´s about finding solutions now», Mr. Solbrække said in his opening remarks.

A rebalancing outlook
Bjørnar Tonhaugen, Vice President of Oil Markets and also co-author of the Global Oil Markets Trends Report, talked about the healing for the global oil market and where we go from here.

In his view, the current oil price at 55 USD is not enough to guarantee the sufficient investments to be able to meet future demands

«The global oil demand will continue to grow and the shale oil production in the US will also continue to grow, while we expect non-OPEC countries to struggle. The key uncertainties are geopolitical issues in countries like Brazil, Iran and Iraq and also the cost inflation in the up cycle. How much will cost increase?». Mr Tonhaugen said in his presentation.

He said that the US shale production seems to be on the verge of a significant upturn, something he described as «a bit scary». As a consequence the market will need longer to rebalance.

«Although OPEC is cutting the supply, the inventory of oil is high, and US shale will be adding the same amount back. The net effect for 2017 is zero. Inventory is not falling as quickly as we hoped, and it is actually scary him much capital the shale industry has managed to raise. They gave the funding and the market was underestimating this growth. This is a concern for the future of the oil price, and this is why we cannot expect a recoil in the oil price this year», Mr. Tonhaugen said.

This is why Rystad now predicts that the market will need one more year before we see any upwards pressure, and the Rystad analysts expect the low project sanctioning to continue in 2017.

Mexico drawing IOC attention
In a separate presentation, Business Development Manager, Americas, Mr. Schreiner Parker, talked about Mexico and asked if Mexico is in position to take over as the Latin giant offshore?

«I know it´s provocative, but what we see is Brazil fighting to keep its position as an attractive market for investments. We believe pre-salt will still dominate, but what about Mexico. What about proven potential vs virgin acreage», Mr. Schreiner said.

Mexico has done several discoveries in shallow waters that are easier to develop and have break-even oil prices below 55 USD/BBL. According to Mr Schreiner, Mexican authorities have also been showing flexibility and willingness to tweak the tees according to the industry´s response.

Kjetil Solbrække is head of the Rio Office.

As for the deepwater blocks in the Gulf of Mexico, a lot of seismic has been shot, and the region has been extensively mapped. Mexico also outranks Brazil on a global «Ease of doing business» ranking.

«How does Brazil maintain its position? It lies in the hands of Brazilian politicians and regulations is the key word», Mr. Schreiner concluded.

24/7
Rystad Energy gathers information from open sources like NYSE and ANP, and by swiping the web 24 hours a day. It is all public information that the company gathers in databases, analyzes and present to the market in detailed reports, «kind of like a spy novel on oil and gas projects around the world», according the Brazil Head Kjetil Solbrække.

The Rystad databases have more than 1000 daily updates and map all contracts, rates, activities within E&P, investments, discoveries et cetera.