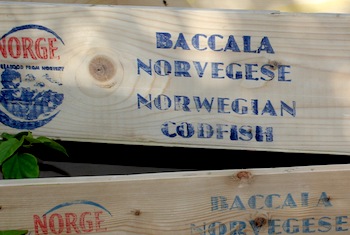 The financial crisis has hit Norway´s bacalhau exports to Brazil hard, but research shows that the traditional Norwegian dried codfish still has preference among Brazilian consumers.

On October 19, 2016, The Norwegian Seafood Council in Brazil hosted a business seminar in the residence of Noway´s Consul General in Urca, Rio de Janeiro. This is the 6th seminar of its kind, that gathers representatives from the industry, authorities, importers and exporters. The opening remarks where given by Consul General Sissel Hodne Steen: Brazilians and Norwegians know each other for the coffee and the codfish that we trade, she said.

«The Norwegian bacalhau is the preferred bacalhau of the Brazilian consumers although consumption is currently down as unemployment is high. Exports have been hit hard by the crisis. The strong US dollar has also had a huge impact on the prices, making our products more expensive in Brazil», Vasco Tørrisen Duarte said in his presentation. He is the market advisor for Brazil of the Norwegian Seafood Council.

«Norway´s market share is however stable at 44 percent, before China of 40 percent and Portugal of 16 percent. We hope to see the market stabilize in 2017», Mr. Duarte said.

Regional supervisor Christian Bue Nordahl talked about the world market for white fish. Figures he presented, show that the Norwegian export of whole clip fish to Brazil so far this year, is down. The export of frozen whole fish is however up 35 percent.

«We are seeing an increase in the exports of frozen fish. Our most important cod fish product in Brazil, is the bacalhau, and here we have seen a significant drop the last years», he said.

Silvio Romero de Carvalho Coelho talked about eating habits, seafood and how the purchasing power of theBrazilian consumer has fallen dramatically the last couple of years.

«The US dollar had a 63 percent increase in 2015. But even with this huge variation, the sales of bacalhau fell much less. The Brazilian consumer lost about 40 percent of their income if we compare the annual GDP in 2010 and 2015. This demonstrates how much the Brazilian consumer likes bacalhau», he argued.

Mr. Coelho also presented research showing that the consumption of fish is increasing in Brazil and that the potential for improving sales in the future, is huge. «You have a quality product in your hands», he said.

Marcio Milan, Manager of the association of Brazilian supermarkets Abras talked about what the supermarket sector expects of the future.

«25 million people go to the supermarket every day. This is an important arena for reaching the consumer. Despite the crisis, we are seeing an increase in sales, and consumer confidence is returning», he said

In good shape
Researchers Daniel Howell and Grete Lorentzen were also among the keynote speakers.

Daniel Howell, researcher at the Norwegian institute for marine research (IMR) in Bergen, talked about the sustainability and traceability of Norwegian cod, and he said that the Barents Sea cod stock is the largest cod stock in the world.

«The Norwegian cod is in very good shape, satisfactory on all levels, and our advise is to keep the cod quota unchanged for 2017.»

Howell is the incoming chair of ICES AFWG, a group responsible for giving advise on quotas on cod and saithe. He talked about the cod stock history, actions taken to protect the stock after World War 2 and about traceability.

«Traceability matters to the Norwegian government, and there is an extensive paper trail all the way from the Norwegian fishermen all the way to the Brazilian supermarket. Norway has been in the forefront of sustainable management for a long time, and laid down decades of work to reduce the impact of our fisheries. Cod is our biggest success story», he said.

According to Consul General Steen, Norway would like to see more research collaboration related to seafood and aquaculture sector

Grete Lorentzen, a researcher at The Norwegian Institute of Food, Fisheries and Aquaculture Research (Nofima), presented a study on the shelf life of dried salt-cured cod stored at elevated temperatures. Shelf life is the number of days until a red color is visible on the surface of the fish, and this is a very relevant study considering the high humidity and high temperatures in Brazil. The bacteria in question won´t make the consumer feel sick but discolorations in the product in the market shelfs is obviously not good for business.

«A job to do»
A similar event was organized in Sao Paulo on October 17, with the presence of Norway´s Minister of Fisheries, Per Sandberg.

«Demand for clip fish products are increasing in Brazil, but so far can not see that Norwegian products have been involved in this growth. This is partly new and ready-to products from low cost countries. Greater knowledge of the Brazilian market is important for further growth and development of Norwegian whitefish industry. Norway has a job to do», Mr. Sandberg said before coming to Brazil.

«1/5 of our total export to Brazil is bacalhau. Despite the huge Norwegian investments in the petroleum industry, these are huge numbers, but we wish they were even higher», Consul General Sissel Hodne Steen commented.