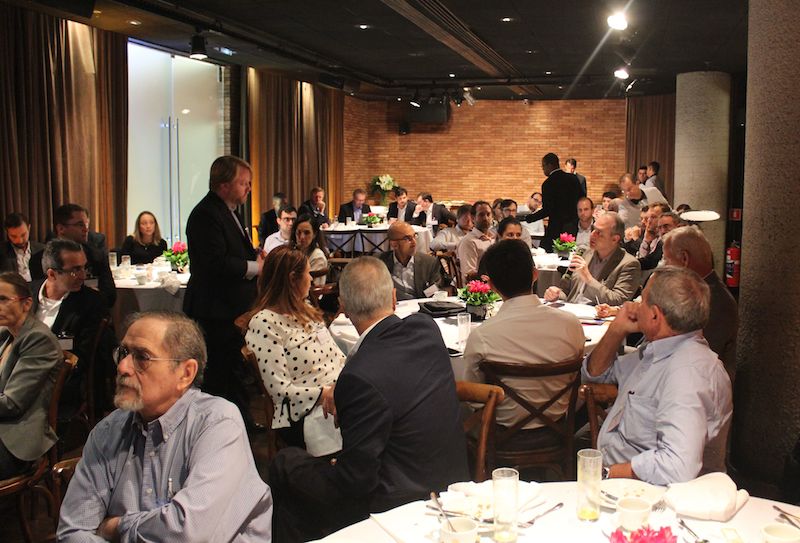 Q&A session after the presentations. 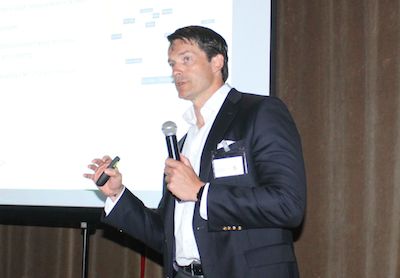 The energy consultancy and business intelligence data firm is currently building a stronger presence in Brazil, and defines Brazil as key in the company´s growth worldwide. It was Nick Livingstone, Rystad Energy´s Head of America who gave the opening remarks accompanied by a short presentation on the services that Rystad provides, to the info session on May 29, 2019.

VP of Latin America, Schreiner Parker then presented a global outlook of the market and of the oil prices going forward.

According to Rystad forecasts, only an oil price below US$ 35 can stop shale from growing.

«The US production has surprises before and will surprise again, and shale production is not very sensitive to price fluctuations. We expect OPEC to continue reducing production when the oil price falls below US$ 60, and expect and oil price in the range of US$ 60-80. But OPEC would have to maintain cuts, and a lot depends on Saudi-Arabia. Without OPEC action, there can be severe cycles with the price ranging fra US$ 25-150.» 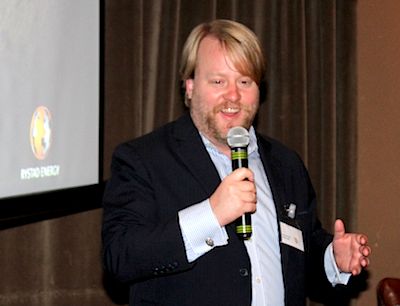 Mr. Shreiner (in the photo to the left) moved on to talk about the state of the offshore market, and said that the oil companies now have bulging cash flows.

«Reserve depletion means something has to be done, and where is it these companies can engage? We believe a lot of that cash should and could go to the offshore space. We see many low cost offshore oil fields ready to be developed  and expect the sanctioning of fields resulting in an increase in production by  8 billion barrels a year. The oil majors are communicating increasing explorations activity. Petrobras has expanded the exploration budget by 66 percent, Equinor by 20 percent and Chevron by 18 percent. But the global story is still one of uncertainty», Mr. Parker said.

Lars Lysdahl, Principal of Rystad Energy, describes the Brazilian boom as a double-edged sword. The activity level is picking up, but there is still need for a prudent approach.

«IOCs are spending top dollars in the license rounds and IOC exploration news show an «exploration bonanza». Signing bonuses passed US$ 2 billion in round 15 last year, and we see more going forward up north than in the past. On the development side, we see companies like BW Offshore going upstream to utilize idle vessel assets. Equinor sees Brazil as the biggest country outside of the Norwegian continental shelf and is scaling research and development efforts into Brazil. Greenfield investments by IOC will soon represent half of the total investments, but new investments are still decreasing. The presence of IOCs is good for service companies and creates a bigger procurement space for services in Brazil», Mr. Lysdahl said.

He presented numbers showing that exploration is increasing by 130 percent in Brazil. Rig activity in Brazil will be outpacing all other regions by next year.

«Rig rates are starting to pick up, but low rig utilization globally imply strong competition as there will be plenty of good rigs to choose from abroad. Brazil is the biggest FPSO market by far and the biggest going forward. One third of the FPSO fleet, of the main FPSO contracts, are in Brazil, and we are likely to see 3-4 new production units starting up every year», Mr. Lysdahl said.

So it seems, the slow, but steady upturn that Mr. Lysdahl and his colleagues predicted in the Rystad Info Session in 2018, has begun.