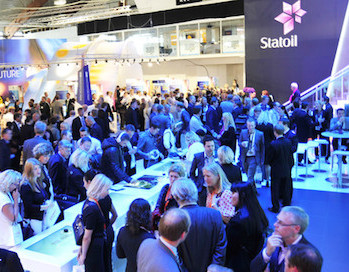 The biannual event Offshore Northern Seas (ONS) took place from August 25-28, 2014. More than 90.000 visitors found their way to the event, which is among the most important in the international oil and gas industry. Exhibitors from close to 40 countries participated, but people from more than 100 countries visited the ONS 2014.

Adhemar Freire, Intsok.Several Brazilian delegations were also represented at this year´s event. More than 80 Brazilians spent the week in Stavanger, and important institutions like CNI, Onip, Sebrae, Fiergs and Fiemg all sent their representatives to the expo.

“Norway has always interested Brazil, and there has always been a great interest in the exchange of technology. The Brazilian delegations are here to discuss possible partnerships and identify synergies”, says Adhemar Freire, the local Intsok adviser to Brazil.

Subsea, shipbuilding and support vessels were the main focus areas on the agenda that was set up for the Brazilian participants.

“These are areas where we see a great potential for synergies. Rio de Janeiro is currently focusing on the subsea market and is working to strengthen its subsea cluster. Attracting investors is an ambition to all of them. We are also looking for ways to better attend the demands of Petrobras and at the same time comply with the local content requirements”, Mr. Freire says.

A point of reference
Rio Grande do Sul (RS) was one of the states heavily represented in the official Brazilian delegation. Mr. Aloísio Nóbrega, Vice-President of the Rio Grande do Sul development agency (AGDI), was the head of the RS delegation, and AGDI was in Norway to to promote the development of the shipbuilding and offshore industries in the south of Brazil.

Danilo Giraldo, Vice-President of the University of Rio Grande (FURG) was also in the 30 people strong delegation from Rio Grande do Sul.

“On August 8 we founded «Association of the cluster of the Rio Grande maritime and offshore hub». I am the president of this association, which has 43 associates. Petrobras, the shipyards in our region and suppliers to the industry, unions, local governments and research and educational institutions are all among the associates. We hope to build closer relations between our cluster and the different Norwegian clusters. Technological development is a goal, and we would like to attract companies to our region that are interested in cooperating with local companies”, he says.

According to AGDI, ONS is one of the most important oil and gas events in the world, held in the Stavanger, a town known as the oil capital of Norway and therefore a point of reference in the technical development and research activities of this sector. The RS delegation also visited Poland, Germany and Austria on the round trip in Europe.

Maurício Diniz, General Manager of E&P services – Subsea Engineering of Petrobras, was one of the main speakers during the session, invited to talk about the SURF market, that is the market for subsea, umbilicals, risers and flowlines.

Emil Volckmar, project manager of Peregrino Phase 2, Statoil do Brasil talked about the Peregrino field. Ricardo Fernandes from Abran gave a review of the Brazilian market for specialized vessels. Aloísio Nóbrega, VP of AGDI, provided an overview of the Brazilian shipyard market with a focus on the future demand and regional capacity.

“We will present our country and our state to important players in the oil and gas sector, and this way we contribute to expanding the knowledge the Norwegian market has about the demands in the Brazilian market”, Mr. Nóbrega said in a press release prior to the event.

The Vice President of Business Development of Aker Solutions, Fabio Pereira, talked about opportunities and experiences in the subsea market, and in a separate session, companies from Minas Gerais, Espirito Santo and Rio de Janeiro presented themselves.

Cluster in the making
Tuesday morning, the government of Rio de Janeiro hosted a session on the subsea cluster RJ – looking for Norwegian partners.

ONS 2014. Photo courtesy of ONS/Kallen.Carlos Camerini, superintendent of Onip gave an overview of the subsea market in Brazil, Julio Pinguelli, Oil&Gas superintendent in the Secretary of Economic Development, Energy and Industry, talked about the Subsea cluster RJ and the different mechanisms for attracting investments in the state of Rio de Janeiro. Marcelo Haddad, CEO of Rio Negócios talked about the current business scenario in Rio de Janeiro.

According to Marcelo Vertis, the vice-secretary of Energy, Logistics and Industrial development, the participation at ONS was «very satisfactory». His secretary (SEDEIS) was represented by the superintendent Julio Pinguelli – and five businessmen. The delegation from Rio de Janeiro made contacts with Norwegian clusters, hosted the seminar where the Subsea cluster RJ was presented, attended the Intsok Brazil Day and met with representatives from Subsea Valley, NCE Subsea and Greater Stavanger.

The ambition of Rio Negócios was to promote business opportunities within the oil industry in Rio de Janeiro and attract investments.

“Rio Negócios expects to make contact with more than 90 different companies in the subsea, naval, automation, seismic, logistics and R&D sectors, and in a series of meetings, the agency will present information on the business environment in Rio, as well as the main demands that need to be met by suppliers of the sector in the years to come”, it says in a press release from Rio Negócios.