Breakthrough for Havyard in Brazil 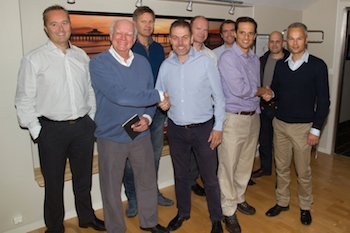 The contract has been entered into by Havyard Design & Solutions, which is responsible for the development of the ship design and for integration and coordination of the equipment packages. The contract also includes deliveries from other business areas in Havyard Group, including Havyard IASTM (integrated automation and alarm systems), PMS (Power Management System) and navigation and communications equipment from Havyard Power & Systems. The equipment package also contains equipment from other Norwegian and international suppliers. This is the first design and equipment contract for Havyard in Brazil, and it is also the single biggest contract entered into by Havyard Design & Solutions. Contract value is approx. NOK 180 million.

Breakthrough
Havyard Group established a separate company, Havyard South America Ltda, in Rio de Janeiro in 2011. Under the leadership of Kjell-Peder Overvåg, the company has worked on selling Havyard products and services in Brazil and South America and on supporting Havyard customers that operate in Brazil.

The design and equipment contract with Grupo CBO represents a breakthrough for Havyard in Brazil.

“The market has been very challenging since we opened an office in Brazil”,  Overvåg says.

“Petrobas, the biggest oil company in Brazil, has almost stopped awarding contracts for new ships, and the delivery of ships under existing contracts has been very delayed or has come to a halt. This is due, among other things, to lack of financing and equity, and lack of progress at the shipyards. The most successful projects have been projects where the shipowners have set up their own yards and managed them themselves. Grupo CBO is a company of this kind and one of the companies that has had greatest success. That is why it is a big feather in Havyard’s cap to be chosen by CBO”, says a very satisfied Overvåg in a recent press release.

Challenges and opportunities
Havyard Group also worked on projects in Brazil before establishing its own office there in 2011. Kjell-Peder Overvåg has many years’ experience of working in Brazil, both on the sale of Norwegian products and on operating Norwegian offshore vessels on the Brazilian continental shelf. Overvåg emphasises the importance of being present and of know-how about Brazilian culture and its business community as success factors in this market.
“Brazil is a very challenging market in which to sell products and services, but there is also a great potential for us here”, Overvåg says.

“We have to use our market knowledge and adapt Norwegian technology to meet Brazilian requirements. A high Brazilian content in projects is also a requirement, which means that suppliers that manufacture in Brazil have an advantage, although it is complicated and also requires in-depth knowledge about the local framework conditions.”
Overvåg is positive, however, about the opportunities offered by the Brazilian market.

“A lot is going to be happening in Brazil in the time ahead, and Petrobras has huge plans. A number of new FPSOs will be put into operation in the years ahead, and the same applies to drillships that are under construction for which contracts have already been signed. There is therefore huge demand for support vessels.”
“The Havyard 843 fits in perfectly here.  Many of the ships that these newbuilds are planned to replace are starting to show their age.  The new ships are broader than their predecessors and have better room for anchors and buoys on deck, which is important in anchor-handling operations. We therefore hope that this is just the first of many business opportunities”, concludes Kjell Peder Overvåg, head of Havyard in Brazil.

Grupo CBO
Grupo CBO currently comprises the shipping company CBO and the shipyards Alianca in Rio de Janeiro and Oceana in Itajai. The group was formed relatively recently, based on the acquisition and merger of the former CBO / Alianca and Oceana. CBO has been a traditional shipping company that entered the offshore sector in Brazil in 1978. It built its first ships at external shipyards in Brazil, but decided in early 2000 to establish its own yard. It has built most of its ships at this yard and most of them are of Norwegian design. Today, CBO’s fleet comprises 23 ships in operation.

Havyard 843
Havyard 843 is designed by Havyard Design & Solutions in Fosnavåg. It is a modern anchor-handling vessel where the focus has been on developing a cost-efficient vessel with the ability to tackle most types of jobs in waters of medium depth. The design provides good stability, a large work deck with cranes and equipment for safe anchor handling and a winch configuration that enables safe and efficient towing and other anchor-handling services for floating offshore installations. For this contract, the Havyard 843 has also been adapted to specific tender requirements from Petrobras.

Havyard designTM
Havyard started with its own designs in 2005 and it sold its first design the same year. The first Havyard design, a Havyard 842 AHTS, was delivered from Havyard’s yard in Leirvik in Sogn in 2008. Since then, 76 Havyard designsTM have been sold for building at yards in Norway, Spain, India, Singapore and China and to shipowners from Norway, Russia, India, Singapore, China and now Brazil. Thirty-three of the designs have been built or are under construction at Havyard’s own yard.
Havyard designTM now comprises a broad product portfolio of offshore ships, fishing vessels and wellboats for the transportation of live fish.
The head office of Havyard Design & Solutions, which develops Havyard designTM, is in Fosnavåg in Møre og Romsdal county. It also has offices in Stavanger, Poland and Croatia. Havyard Design & Solutions has 130 employees.