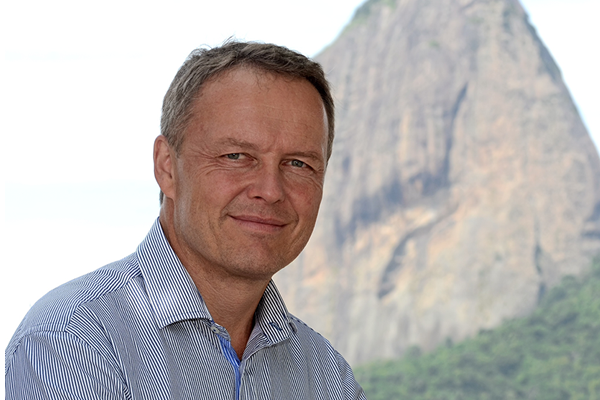 The Chinese oil company Sinochem is the client for the first two of these projects. Together with Statoil, Sinochem is developing the giant Peregrino oil-field on the Brazilian continental shelf. The third is a contract with Petrobras.

SINTEF Brasil is a research foundation wholly owned by SINTEF in Norway. The foundation performs research and development projects in Brazil along the lines of what SINTEF has been doing for industry and the public sector in Norway for the past 60 years. Based in the Brazilian oil capital Rio de Janeiro, SINTEF Brasil is initially focusing on the technological needs of the country’s petroleum sector.

However, Kjetil Solbrække, managing director of the foundation, envisions that in the course of three to five years, SINTEF Brasil will also be erforming contract R&D projects for the host country’s primary minerals and materials sector and dawning aquaculture industry.

Mr. Solbrække has held leading positions in the Norwegian Ministry of Petroleum and Energy, as well as in Hydro and Statoil, and emphasizes that he is proud of the new contracts and that he is very pleased for the sake of the whole SINTEF Group.

“Some people have wondered why SINTEF has set up shop here in Brazil when the structure of the company does not allow profits to be transferred to Norway. I am convinced that our presence in Rio will make the whole of SINTEF more attractive and robust,” says Solbrække, pointing out that establishment in Brazil will enable SINTEF to take on major contracts.

“We can do parts of the job in Brazil, other parts in Norway, with finance coming from both places. This enables the two geographical bases to take on more and larger tasks than either of them could have done alone. The conversations that we have had with the petroleum sector in Rio suggest that SINTEF will encounter a growing demand for this type of multinational delivery.”

Deep water and the environment

The three contracts that have already been signed involve deliverables only from Brazil.

Two of them concern competence development for Sinochem, and focus on problems concerning petroleum production at great water depths – which is the greatest challenge on the Brazilian shelf – and on modeling environmental impacts.

The project for Petrobras starts with multiphase flow, where the client particularly wants to look more closely at oil and gas flows with high CO2 content.

Together with the petroleum sector in the “land of the samba”, SINTEF Brasil has drawn up a list of proposals for future projects. Kjetil Solbrække says that SINTEF’s Brazilian subsidiary expects to have oil-related projects worth MNOK 50 in its order book by the end of the year.

Solbrække stresses that SINTEF owes a large debt of gratitude to his predecessor Øyvind Hellan and to Jack Ødegård, chairman of the board of SINTEF Brasil.

“These two have much of the honour for what is coming to fruition now,” he says.

It was not by accident that SINTEF’s first overseas-based subsidiary came to be established in Rio, nor that hydrocarbon production is its primary area of focus. For it is on the Brazilian shelf that the biggest discoveries in the world are currently being made.

“Until now, the Norwegian continental shelf has been a technological trail-blazer in offshore oil recovery. Now, deeper waters and even greater challenges await us in Brazil. These will be just as important for the development of technology in the future,” says Solbrække, who points out that this will give SINTEF a unique point of departure as a research institution.

“We come from what has been a trail-blazing region, i.e. the North Sea. Now we are going to transfer our expertise to a new region, deep-water fields offshore Brazil.”

Brazil, which is still a young petroleum nation, has adopted a system that resembles the Norwegian technology agreements from the early days of the petroleum epoch here. Companies that operate on the Brazilian shelf must put at least one per cent of their turnover in the country into R&D in Brazil.

“The contracts that SINTEF Brasil has already won, and those that we are in the process of securing, are projects that we would not have gained without a presence in this country. So these are not jobs that we have stolen from other Norwegian companies,” emphasizes Kjetil Solbrække.

The one per cent from the oil companies is put into a fund, the “Special Participation Fund” (SPF), which is managed by the Brazilian Petroleum Directorate. Foreign companies do not have access to this pot of cash, and this is why SINTEF chose to establish itself as a foundation.

Billions in the pot

In April last year, SINTEF Brasil gained official accreditation that means that it can apply for project financing from the fund, which has serious amounts of money available.

At least half of the “one per cent” must be used by SPF-accredited Universities and research institutes. This came to NOK 2.5 billion in 2010. Both of the projects that SINTEF Brasil has already won, and the project funding that the foundation has applied for, are linked to the scheme.

At the same time, Solbrække stresses that SINTEF has not come to Brazil as a blinkered research giant with eyes for no more than the country’s continental shelf.

“Our vision and values are well received and often commented on by employees when we describe SINTEF at external meetings. The Brazilians have nothing that resembles us.”

At the same time, SINTEF’s leader in Brazil makes it clear that the learning process goes in both directions:

“We need to be a bit careful on the Norwegian side.

“We tend to think that we in Norway are capable of doing everything, and that few people elsewhere can do anything at all. But the Brazilians claim that Santos Dumas, who was Brazilian, was the first person to fly, not the Wright brothers, and in Brazil today, Petrobras has set several world records in deep-water operations. So what we are dealing with is a very competent and proud nation; a country from which SINTEF certainly has a lot to learn, also with regard to its Norwegian activities.”