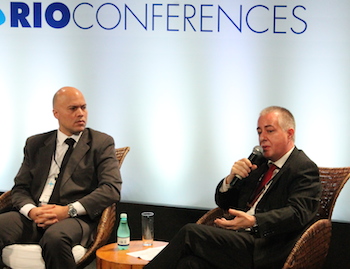 Investment promotion summit on oil and gas held to increase the interest of domestic and international investors. And Norwegian experiences can contribute to making Rio de Janeiro and Brazil even more attractive, according to keynote speakers at the event.

Rio Conferences is a comprehensive investment promotion program that took place during the FIFA World Cup 2014, and on July 3, investment opportunities within the oil and gas sector were discussed during a conference where both the industry, decision makers and other key stakeholders were present.

From the left: Marcelo Mafra, ANP, and Carlos Assis, Oil & Gas Partner at EY Consulting.83 percent of the total Brazilian oil production takes place in the state of Rio de Janeiro, and according to Julio Bueno, State Secretary for Economic Development, Industry and Energy, 55 billion USD will be invested in the Brazilian oil and gas sector per year, citing numbers from the International Energy Agency.

“Most of it will be invested here in Rio. Opportunities are great. Large areas have not even been explored yet. Big foreign direct investments show that we are attractive. Predictability is important to potential investors and we need predictable rules and regulations”, he said in his introduction. Mr. Bueno criticized the regulations on the pre-salt reserves, which he called “more interventionist than they should be”. He also questioned the local content requirements and asked for a more strategic approach.

Carlos Assis, Oil & Gas Partner at EY Consulting, was very clear in his message to the audience at the conference: Brazil needs to learn from Norway. His company has studied how Norway and the United Kingdom developed their oil industry and concludes that Norway has learned lessons that can be useful to Brazil.

“We have to bring Norway over here, and learn from what they have done the last 30 years. You could say we have to “annex a Norway” to our industry”, he said.

The key to success in the Norwegian system, that was underlined by Mr. Assis, was the simple Norwegian tax system, the transparent regulations, a slow pace and the focus on R&D.

“This is how they developed a sustainable, but competitive oil industry in Norway. The tax level is high, but simple and encourages investments in R&D. In Brazil, we seem to be in a hurry. We need to evaluate our regulatory model and our tax system. We should seek inspiration in the Norwegian model and create clusters, important enablers in developing the supply chain”, Mr. Assis said.

Deputy Director of Economic Development, Industry and Energy, Marcelo Vertis is planning a trip to Norway during ONS, and is working hard to develop the local subsea cluster in Rio, with the help from Norway. Here with Glorisabel Garrido, the executive manager of NBCC.The importance of business clusters was also mentioned by State Secretary Julio Bueno and Roberto Ramos, CEO of Odebrecht Oil & Gas.

Commercial director of Rio Negocios, Mr. Jeferson Soares is very satisfied with the outcome of the event.

“More than a hundred people, among them many executives and directors from important companies of the sector, participated, and they took part in discussions on a high level, but also with a very practical approach. This was important to us”, Mr. Soares says.

Aftermarket
During the opening session of the event, Cristina Pinho from Petrobras said that there is a lack of maintenance yards and aftermarket services in Brazil.

“The industry needs to open up to the world and not only behave according to Petrobras needs”, Mrs. Pinho said. Infrastructure is another challenge mentioned by the keynote speakers. Brazil still needs more ports and better airports, and logistics is a bottleneck.

Predictability was another word mentioned by several of the keynote speakers during the event at Museu do Arte do Rio (MAR).

During the panel on subsea, José Mauro Ferreira, Commercial Director of FMC Technologies, a company with employees both in Norway and Brazil (and 14 other countries), said that the subsea industry depends on the demands from the operators. He would like to see the operators investing more in research and the development of prototypes.

“It is not like the new model of the Iphone which everyone buys. No one buys an extremely advanced christmas tree. It depends on the operator needs”, he said.

Local content and productivity
During the panel on shipbuilding, local content was discussed. Antônio Müller, the President of ABEMI and of the NBCC member company Tridemensional, called for a reevaluation of the local content requirements.

Antônio Müller from Tridimensional.“We need to reconsider if this strategy is really what Brazil needs at the moment”, he said.

According to Luis Mattos, Vice President of Sobena, the local content requirements seem to bother Brazilian executives more than they bother foreign players in this sector.

“Executives from abroad have no problems with the requirements.  The just want to understand the rules of the game”, he said, and repeated the need for predictability.

Another topic was how to increase productivity, and André Pompeo do Amaral Mendes, the Oil and gas supply chain Department Manager of BNDES, outlined the development and revitalization of the Brazilian shipbuilding industry the last 15 years, and asked the keynote speakers how Brazil needs to proceed to increase competitiveness in an international market.

“The challenge is to incorporate “a Norway” into the Brazilian market”, Mr. Amaral Mendes said.

Fernando Barbosa, the CEO at the Enseada Shipyard, called for more investments in the engineering part of important projects.

“We have to avoid “jabuticabas”, that is solutions that are unique to Brazil, and we need to acculturate our professionals.”

Paulo Alonso, a close advisor of Petrobras president Graca Foster, said that productivity is something that concerns Petrobras, and identified three main challenges for the sector:

“We need to improve the planning and management of projects, to deliver on time and avoid delays. We need to improve the training of people and recover the skills that were lost when the Brazilian shipbuilding industry went into crisis in the 1980-s, and we need to develop a local supply chain. This is something we lack in Brazil. The challenges are great, but we can do it. You can say that we have to do an urgent intervention on an aircraft that is already flying”, Mr. Alonso said.

Intsok advisor Adhemar Freire was also among the participants at the conference on July 3. To the right; Glorisabel Garrido.Pioneer event
Rio Negocios is the international promotion agency for the city of Rio de Janeiro, working to connect international and Brazilian businesses to Rio, helping them set up, succeed and grow.

Similar conferences has been held on health, technology, infrastructure and the audiovisual sector. The last conference, a Global investment summit, takes place on July 11, 2014.

“This is a pioneer event where we use a sporting event to promote business opportunities in our city”, President of Rio Negocios and host of the conferences, Marcelo Haddad, said.

16 different panels and more than 100 keynote speakers have participated at the thematic conferences with a total audience of 700 people, among them policy makers, regulatory bodies, suppliers, clients and potential investors.

“We used the opportunity to invite representatives from companies passing through Rio during the World Cup, and we consider the seminars a success. The number of local companies was also very high”, says Jeferson Soares, commercial director of Rio Negocios.