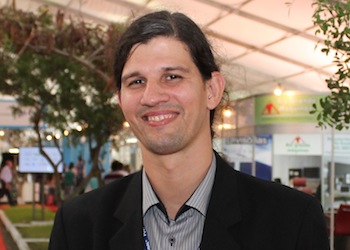 When the naval industry in Rio Grande do Sul in the south of Brazil is building their own naval cluster, they use the Norwegian cluster experience as an inspiration in their work.

Helle Moen, director of Innovation Norway in Brazil, shared some Norwegian experiences during the Naval Cluster Fair in Rio Grande. Photo courtesy of Marit Karlsen BrandalDirector of Innovation Norway in Brazil, Mrs. Helle Moen was one of the international speakers during the Naval Cluster Fair in Rio Grande this March, and she was invited to tell the local industry more about the Norwegian cluster model. Norway has a long tradition for clusters, and the first cluster program was launched by Innovation Norway, The Norwegian Research Council and SIVA in 2002. At the time, the international discussion showed that enterprises belonging to business clusters achieve a higher value creation than enterprises without such linkages.

The different Norwegian programs give financial support for a long-term development of business clusters and the goal is to enhance innovation and internationalization processes in the most growth-oriented Norwegian clusters, based on collaboration between industry, R&D and the public sector.

In the city of Rio Grande in the south of Brazil, reality is somewhat different.

The Rio Grande naval cluster was established in 2013, and the work is in an early phase. Executive director of the cluster and vice-principal at the Rio Grande Federal University (FURGS), Danilo Giraldo, is still very excited about the progress:

“Due to the huge pre-salt discoveries off the Brazilian coast, the Brazilian shipbuilding industry is experiencing a revitalization. The local naval industry is booming and the demands are huge. This is a great opportunity for us”, Danilo Giraldo says.

Three big shipyards are located in Rio Grande and Petrobras has placed 36 percent of all the shipbuilding contracts for the oil and gas sector in the region. But the first yard established in Rio Grande in 2005, and the heavy presence of shipbuilding industry is something new to this region.

Today both the federal government and the government of the state of Rio Grande do Sul are working to strengthen the naval cluster in the Rio Grande region. The state has invested 1 million Brazilian reais to support naval clusters and is also supporting different training programs.

In 2013 Rio Grande was chosen as one of five oil and gas clusters in Brazil to receive funding from the federal Prominp program. It was during a Prominp workshop that Giraldo was first introduced to the Norwegian cluster model.

“The story about the Norwegian oil and gas industry is very nice. You started small and got bigger by making people work together. Even competitors got stronger by working together. This is an important lesson.”

The main objective to the Rio Grande Naval cluster is to increase the competitiveness of the local industry.

“Last year we gathered universities, shipyards, the supply industry, the government and the unions. Our objective is to aggregate the local supply chain, and we are trying to attract more companies, not only the big shipyards, to our region. We are currently trying to map the main needs of the shipyards when it comes to technology and innovation. The goal is to make the shipyards more competitive and strengthen the local suppliers”, Mr. Giraldo explains.

The mantra of the Norwegian cluster model is to “cooperate when you can and compete when you must”, and the basic idea is that the companies in a cluster identify their common problems and work together to solve them.

Danilo Giraldo is going to ONS later this year, and is very interested in a closer cooperation with Norwegian clusters.“Brazil does not have the same support mechanisms when it comes to funding, but the most important mechanism has to do with cooperation in Norway. This is the key. Here in Rio Grande we have four shipyards experiencing the same problems. Sometimes they compete and sometimes they cooperate to increase productivity. I believe they are cooperating most of the time”, Danilo Giraldo says.

PULLING IN THE SAME DIRECTION
With the support from  the Royal Norwegian Embassy in Brasília and the Consulate General in Rio de Janeiro, Innovation Norway and Intsok – Norwegian oil and gas partners organized a fact-finding mission to Rio Grande do Sul during the Naval Cluster Fair. Eight Norwegian companies, all potential suppliers to the shipbuilding industry in Rio Grande do Sul, participated on the mission.

Gulbrand Wangen, regional director for Brazil at Intsok, was impressed by the unity and cohesion in the local industry.

“They are all working together to strengthen Rio Grande as a main shipbuilding region in Brazil. Even Petrobras and the federal government are supporting the effort. The supply industry in the oil and gas sector and other sectors is even more advanced than I imagined before coming here, and I am convinced that it is possible for Norwegian suppliers to find local partners that can provide competence at a lower cost than in the Rio de Janeiro region. This alone makes Rio Grande do Sul an attractive state for Norwegian industry”, Mr. Wangen says.

In her presentation during the Naval Cluster Fair, Helle Moen of Innovation Norway, emphasized how clusters are seen as successful innovation environments in Norway. R&D activities are an important part, and internationalization is a key word as Norway alone is often a too small market.

“We work to increase the competitiveness internationally by fostering stronger interaction and cooperation, increase innovation capabilities, give better access to R&D, increase the international focus and attract investors and expertise”, Mrs. Moen said.

The ARENA program was created to nurture emerging clusters while the Norwegian Centres of Expertise, or NCEs, are well-established world-class clusters. A new initiative is called Global Centre of Expertise, or GCE, for clusters working to become world-leading in their field.

“Norwegian experiences show that cluster initiatives are important in regional and national innovation strategies. Currently 12 Norwegian Centres of Expertise, called NCEs. Several are active in Brazil and have signed MOUs, and we are keen to see increased cooperation between Norwegian and Brazilian clusters”, Mrs. Moen said in her presentation.

She also presented the NCE Maritime cluster in more detail. This cluster is concentrated in the Alesund region and includes 18 shipping companies, 14 shipyards, 14 ship design companies, and had a turnover over 55 billion NOK in 2013.

“Norway has the second biggest offshore fleet in the world, but only 0,1 percent of world´s population. Over 75 percent of the world´s large hi-tech offshore vessels are designed in the NCE Maritime area. The cluster has become a knowledge hub in the global maritime value chain, and represents a winning mix of high pace innovation, prototype orientation, competition, informal communication, cooperation and unique know-how within the field of advanced marine operations for the global offshore industry.”

EXCELLENCE
The Rio Grande naval cluster is one of five clusters around the country that the federal PROMINP program has chosen to support. Paulo Alonso is the manager of this program. He is also a close adviser to Petrobras president Graça Foster, and during the official opening of the Naval Cluster Fair in Rio Grande in March, he said that the Brazilian shipbuilding industry needs to increase productivity fast. He called for a stronger effort in training of personnel, overcome technological challenges and building local supply chains.

“The executives in the Brazilian shipbuilding industry say they will be competitive on the global market within 10 years, but Petrobras depends on you, and cannot wait 10 years. We need to be excellent today, and Petrobras is optimistic, proud and confident that we can reach our goals in time. The concentration of expertise here in Rio Grande do Sul is very big”, he said.

“We use to say that we are changing the wheel of a car in full speed. And this is the way we have to do it in Brazil“, Danilo Giraldo concludes.