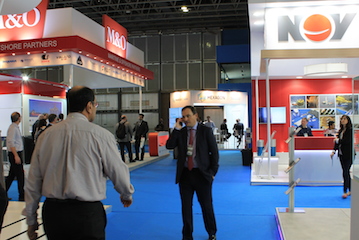 Norwegian entities and business representatives had busy days packed with a variety of events during OTC Brasil 2015.

OTC Brasil took place for the third time this year, and the conference is considered  one of the world’s foremost events for the development of offshore resources in the fields of drilling, exploration, production and environmental protection. It is organized by the Offshore Technology Conference and Instituto Brasileiro de Petróleo, Gás e Biocombustíveis. Founded in 1969, OTC’s flagship conference is held annually in Houston. OTC has since then expanded technically and globally with the Arctic Technology Conference, OTC Brasil, and OTC Asia.

The exhibition included more than 160 companies and organizations, from 16 countries this year. A handful of NBCC companies – DNV GL, Kongsberg, M&O Partners and NOV – were present at the trade show in Riocentro, but as a result of the current challenging situation in the oil and gas industry, the exhibition was radically downsized this year.

Representatives of Norwegian entities did however play a very active role in the technical program of OTC – both as speakers and as participants in panel discussions. Among the participating companies were Statoil, DNV GL, Aker Solutions, Subsea 7, Well Design Online, AGR Software and FMC Technologies. Additionally, research entities like SINTEF and the Norwegian University of Science and Technology (NTNU) were present.

Subsea 7 was also awarded the «Distinguished Achievement Award for Companies», for the Buoy Supporting Risers System. The award was received by the company ́s Vice-President Vitor Bomfim.

«This was undoubtedly the most intense project the company accomplished in Brazil. But it’s not a coincidence that the company received this award. We have decades of investments in subsea engineering», he said, according to an OTC press release.

On October 26, the Consulate General and Innovation Norway, Intsok and NBCC hosted a cocktail reception on the occasion of OTC.

«OTC Brasil has become an event of great importance to the oil and gas sector in Brazil, and the conference puts its mark on the city, and it is very encouraging to see so many representatives from Norway here, alongside Brazilians and also representatives from Brazilian authorities and we appreciate that you have found time to come here tonight. Your presence demonstrates that this is an international business sector. It is no secret that the sector is passing through challenging times, not only in Brazil. Every country has its particular challenges, but it is true as it is said that in difficult times, new opportunities occur. Brazil and Norway have everything to gain by close collaboration. Innovation and development of new technologies to respond to the challenges have become even more important», Consul General Sissel Hodne Steen said in her address at the reception.

The industry also got together during a networking event called the Oil and Gas Brasil Meeting on October 28.

Focus on subsea
Several seminars and workshops took place during OTC. On Monday October 26, 2015, Intsok and Innovation Norway organized a seminar on well, drilling, subsea and pipeline integrity and the two new ANP regulations being implemented for the area.

The National Petroleum Agency (ANP) in Brazil is in the process of preparing a new and strict regulatory framework including guidelines on well and drilling integrity and subsea systems integrity, including pipelines, and the new regulations were presented at the workshop. The oil companies Petrobras and Statoil shared how they prepare for the implementation and Intsok partners presented solutions corresponding to the new regulations.

On Wednesday October 28, 2015, subsea technology in Norway and Brazil was discussed in another seminar organized by Innovation Norway and the Bergen based subsea cluster GCE Subsea.

But while the Intsok seminar focused on new regulations for the sector, the GCE Subsea seminar featured presentations of companies in the Fram market entry project that are looking for business partners or other ways to enter the Brazilian market.

More about the seminars:

Energy cities
Parallel to OTC, the World Energy Cities Partnership (WECP) held its Annual General Meeting in Rio de Janeiro. Headquartered in Houston, USA, the World Energy Cities Partnership (WECP) is the international hub for energy cities. Its objective is to support the growth of the energy economy.  Currently, there are 23 world energy capitals that make up the WECP collaboration network. WECP membership allows cities to work within the organization to expand business opportunities, share ideas on investment attraction and urban development, and develop strategic alliances with other world energy cities. Cities like Rio de Janeiro, Stavanger, Houston and Aberdeen are all members of the weep network.

Stavanger mayor Christine Sagen Helgø is the current chairman of the WECP partnership, and a delegation from the city of Stavanger, headed by mayor Helgø, was present for the AGM. On October 26, Mrs. Helgo participated in a seminar organized by Rio Negocios, called «Are there still opportunities in the oil and gas market? Where are they?»

«Today’s cities are facing complex challenges, from financing energy infrastructure to developing policies that promote innovation. The WECP annual meeting brings together a diverse, multi-stakeholder community to provide the means to address these challenges and to build partnerships that support positive, transformative change”, said Christine Sagen Helgø, in a WECP press release.

The city of Stavanger is, like Rio de Janeiro, heavily affected by the crisis, and the current down cycle is more dramatic than first expected to the Norwegian oil capital, Mayor Helgø shared in a seminar session.

«The impact on the industry and the city of Stavanger is dramatic, but this is not the end and we are looking at least 50 years ahead in the Norwegian oil and gas industry. Our cities are very different, but we face the same challenges and can learn from each other», she said.

The WECP delegations also visited the Sugar Loaf, the technology park at Fundao and the Olympic Park.