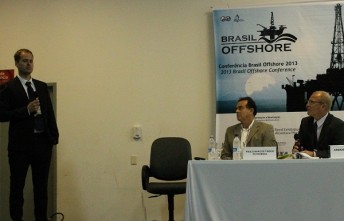 They come from all over the world, in a variety of shapes and sizes and they offer a vide range of services and products. But when the international offshore industry gathered in Macaé for the 7th edition of Brasil Offshore Oil and Gas exhibition and conference, they had one thing in common: They all come to establish new partnerships and present innovations within sectors like drilling, subsea operations, logistics and safety.

Macaé is often referred to as the oil capital of Brazil, and the city is in fact the operational base for more than 80 percent of offshore exploration in Brazil.

Brasil Offshore is the third biggest event of this kind in the world, and in 2011, the event attracted more than 52,000 professionals and 636 exhibitors. The 2013 event hosted about 800 national and foreign exhibitors and received more than 50,000 visitors, according to the organizers.

Several Norwegian companies were among the exhibitors during this year´s event, both well established companies as well as newcomers looking for an entry into the market.

What all of them have in common is the ambition to establish partnerships and present their solutions within a variety of segments, to the market.

“We have to be here, and we have to be a part of this. Macaé is the most important oil city in Brazil, and we meet potential clients and make a lot of important contacts. After an event like this, the visitors that passed by our stand, start considering us more carefully. It´s all about finding the right business partners”, says J. Sergio dos Santos, offshore manager at Jotun.

The Norwegian manufacturer of paint and marine coatings has been present in Brazil for 12 years, but Jotun has only recently made the offshore market a priority. Currently, the company is striving for one of the attractive contracts on drill ships being built for Petrobras at several Brazilian shipyards.

“We are working closely with Sete Brasil, with the Jurong shipyard and with Brasfels, and are hoping to be awarded a contract to supply paint and coating to the vessels. Time is running out, and we are expecting a decision within the next two months”, says J. Sergio dos Santos.

Palfinger Marine has already signed a contract with Jurong to deliver 28 cranes to seven of the drill ships being built for Sete Brasil, but is eager for more.

“We are battling for new contracts, and I am very optimistic. Palfinger Marine is investing heavily in Brazil, and the company is growing Palfinger is also offering some new products that Dreggen didn´t have, and it is important for us to be here at this event to promote these”, says Suzana Sandoval Barros, country manager of Palfinger Dreggen do Brasil.

Norsafe, a Norwegian manufacturer of lifeboats, davits and winches has had a service unit in Brazil for several years, but earlier this year, Norsafe established a production unit in Brazil, cooperating closely with a Brazilian business partner. This means that the Norwegian company is now able to comply with the Brazilian local content requirements.

“Norsafe is present at the Brasil Offshore expo to make contact with yards, operators, designers, rig and shipowners. In 2013, Norsafe started production in Brazil, and we are currently producing life boats for Petrobras FPSOs”, says Jan Erik Kilen, area sales manager for Brazil.

Autronica has 22 years of experience in the Brazilian market. The Norwegian producer and supplier of fire safety equipment, is market leader in the offshore market in Brazil, according to Helios Caldas. Petrobras is the principal client. The company has commercial representation and distribution in Brazil, while the production unit is located in Trondheim.

“Giant of the North Sea”
Several Norwegian companies were invited to give presentations during the technical sessions taking place during the conference.

Frode Velsand Blindheim, the Statoil team leader of reservoir technology of the Statfjord field, presented a case study on Statfjord during a session on reservoir integrity.

Production on the Statfjord field started 33 years ago, and the field was introduced as one of the most mature fields in the world and “a giant in the North Sea”. When it comes to constantly increasing recovery and prolonging the lifetime of the field, Statfjord is a world reference. Statoil´s current lifetime assumption for the field is 2025.

“This is probably a European record”, Frode Velsand Blindheim said.

But in the years leading up to 2005, production declined heavily and oil prices were low. In 2005, the Statoil board approved the Statfjord late life project, and it was decided to convert Statfjord into a gas field.

“Large investments were required, and we had to do several topside and pipeline modifications to the get the field ready for gas production. Today we have a different drainage strategy. New thinking and new technology helped us many times along the way, constantly increasing the recovery. We have recovered 66 percent of the oil and 58 percent of the gas, but by reservoir pressure blowdown, we expect to recover 70,5 percent of the gas”, Frode Velsand Blindheim said.

Relationship manager Flavia Diniz at Planet Visas says events like Brasil Offshore is of great importance when it comes to promoting the services her company offer.

“For us it is important to be present at events like this, and we have experienced that our presence is bearing fruits. Here we meet companies in an early phase, when they are thinking of establishing and don´t really know what they are going to need. We are facilitators in the process of legalizing documents and providing visas for foreigners that are coming to work in Brazil. It is important for them to know that we exist and what kind of services we offer”, Flavia Diniz says.