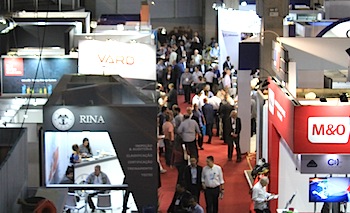 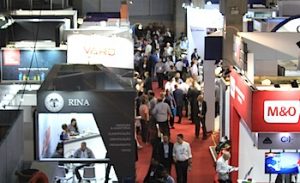 Several NBCC associates, like Vard, Ulstein, Wilhelmsen and DNV GL were also among the exhibitors at the event, which took place in the Sul America Convention Center in Rio de Janeiro this month.

Many Norwegian suppliers of equipment to the naval industry were represented by sales agents, demonstrating how Brazil remains an interesting and important market for Norwegian suppliers, in a time where adapting to a new market reality is a concern to the industry.

«Our goal is to help the shipbuilding industry to grow again, increasing demands and narrowing the gaps in this rich industrial chain», Event Manager Renan Joel says in a message to exhibitors and visitors. 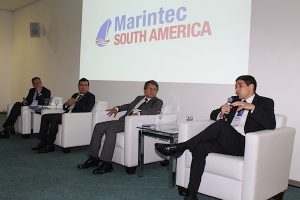 The presentations were followed by a Q&A session

NBCC member Vard hosted a cocktail at the company stand during the maritime convention while MO Partners organized a seminar on the the future of the maritime & offshore industry in Brazil where the keynote speakers gave their take on the current market situation.

They all shared a message of moderate optimism on behalf of the industry, and the need for stable framework conditions and regulations that do not damage competitiveness was emphasized repeatedly.

Mr. Paulo Carvalho, Director of the governmental body Pré-sal Petróleo talked about the changes in regulations that have already taken place.

«The calendar of bidding rounds provides a clean forecast of what we will have the next four-five years. The bid rounds involve areas with huge potential», he said. 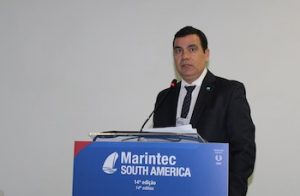 Abran Manager Ricardo Cesar Fernandes talked about how Norwegian shipowners look at the opportunities in the Brazilian market.

«The shipping industry is a precondition for global growth, it is capital intensive and highly regulated. The industry is known for its innovation and drive, especially offshore. But there are challenges. This year, only six discoveries have been announced. We believe the ANP agenda will unlock huge investments», Mr. Fernandes said.

Norwegian shipowners consider Brazil one of the most important markets, despite the downturn.

«But we need a competitive environment, and changes in regulations will improve competitiveness further, as the complex framework is currently seen as a main obstacle for growth», Mr. Fernandes said.

Joao Paulo Bras, Managing Director  of Maersk Supply Service presented the view of a shipowner to the seminar. His main concern is the global over-supply of offshore support vessels (OSVs).

He called regulations a «pre-condition to invest», and therefore one of the main challenges to Brazil.

«There is work to be done on the market foundation. Brazil has a huge deepwater potential here, and good indications of recovery. But the OSV market will not improve in demand, so there is a need to reduce the supply. That being said, Brazil is extremely well positioned for growth», Mr. Bras said.

The keynote presentations were followed by a Q&A session, chaired by Mr. Jan Lomholdt.

Marintec South America is an annual event that takes place in Rio de Janeiro, considered an important meeting place for decision makers and other key stakeholders of the maritime industry in Brazil.