Chocolate made in Rio heading north 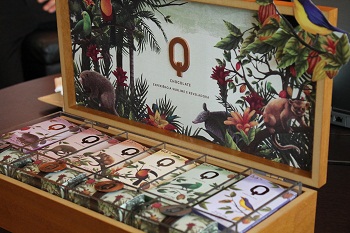 The very exclusive carioca chocolate Q will soon be available to a select group of Norwegian consumers. On February 13, 2014, NBCC members were invited to participate in a tasting of Q chocolate.

About 15 people were present at the event organized by NBCC and Gastronomia Aquim, where Alessandro Michelon and Bel Augusta talked about the chocolate brand.

Alessandro Michelon and Bel Augusta from Aquim Gastronomia.“The Aquim family wants to rescue the real taste of cocoa. We do not use milk and very little sugar. We call our chocolate intense, not bitter (amargo in Portuguese). Cocoa from Bahia used to be known as a low quality cocoa, but when we presented it at the Salon du Chocolat, the most important international chocolate trade fair in the world, in 2010, the cocoa bean won the price as the best bean of the year”, Alessandro Michelon said during the NBCC tasting.

The cocoa used in the Q chocolate is handpicked by the Aquim family and is cultivated in Bahia,at the Fazenda Leolinda, by farmer João Tavares.

The cocoa trees grow inside the Atlantic Rainforest of Bahia, and depend on the shadow from the other trees.

“This way we are also preserving the forest by growing cocoa”, Michelon said.

He explained how the cocoa trees are cultivated, how the fruit is collected, and showed photos of the fermentation process of the beans. The secret behind the superior taste of the Q chocolate, is how farmer João Tavares use round barrels to guarantee a more homogenous fermentation. While the cocoa is grown in Bahia, the Q chocolate is produced in a facility in Santa Catarina.

Hit by plague
The reason why the cocoa from Bahia had a bad reputation, is that the cocoa farmers in this region suffered what Michelon calls a terrorist attack in the 1980-s. The cocoa farmers were both prosperous and influential at this time, and a plague was introduced to reduce their power in the region. As a result the cocoa trees were almost eradicated.

The real taste of cocoa is what Q chocolate aspires to give to the consumers.“Today production in the region is about 80 per cent of what it was on the best, but the stigma remains. We are very happy to be reverting this, and today we see that the stigma has become a market protection mechanism to our product.”

Big player
In Rio de Janeiro, the luxury brand is currently available at the Village Mall and in the Garcia D’Avila street in Ipanema, as well as in hotels like the Fasano and Copacabana Palace.

Last year Aquim also exported about 10.000 chocolate bars. According to Manoela Balthazar of the Aquim Markering department, this equals about 15 percent of the total production.

In 2013, Aquim produced a total of 6 tonnes of chocolate, and the ambition is to triple sales both abroad and in the domestic market.

The ambition is to make Brazil, a country that has been among the main producers of cocoa in the world for centuries, not only a suppliers of the the raw material but a big player on the global market, currently dominated by the Europeans.

“Our mission is to show the world the real taste of chocolate, a sweet from a seed of a Amazon fruit – the cocoa. Our chocolate rescues this forgotten taste, and we we only use cocoa, sugar and cocoa butter in our bars. We do not use neither soy products, aromatizers nor milk, and the beans are handpicked by the head chef Samantha Aquim”, Manoela Balthazar informs.

Brazil festival
Soon the exclusive chocolate will also be available in Norway, but only to a handful of lucky consumers.

“We are exporting our chocolate to the Norwegian cruiseline Viking Cruises which is organizing a Brazil festival on board their seven cruise ships”, Bel Augusta says.

The Q chocolate comes in a variety of intensities, ranging from 55 -85 per cent of cocoa, and the participants at the tasting on February 13 had the chance to taste all of them.Travelers to Sweden, Finland and Estonia will have the chance to taste the delicious Brazilian treat. 10.000 bars of 50 g has been sold to Viking Cruises, Manoela Baltazar of the Aquim Marketing department informs.

Chocolate library
The exclusive chocolate was launched in the luxury segment only 3 years ago, and hasn’t stopped growing since. The Aquim family asked the late Oscar Niemeyer to design the first chocolate bar, and the result was a bar that looks like a wave.

The Aquim chocolate has also been selected to be included in the selection of the elegant British tea house Fortnum & Mason, who is building up a library of the most exclusive chocolates in the world. Aquim is the only Brazilian chocolate on this list.