Christmas party by the pool 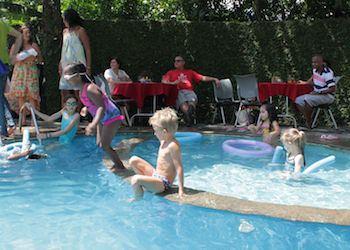 The children were the guests of honor at the traditional NBCC Christmas party this year, and the lighthearted spirit displayed by the younger guests can serve as inspiration as a difficult year comes to an end.

The traditional NBCC Family Year-End event took place at the Seamen´s Church in Gavea on November 29, 2015, and representatives from almost 20 different companies were present. The Christmas party is considered an important gathering during the holiday season as it gives the members a chance to meet in more informal surroundings, do networking and at the same time spend time with their families.

About 90 people were present for the event, and the pool was by far the greatest attraction for the children at the party –  as well as the free popsicles, of course. Several activities were organized for the youngest guests, while the older guests at the event found equal pleasure in the open bar serving a variety of cold drinks in the lovely surroundings at the Norwegian Church.

The new priest Anders Rosland and his wife were present for the year-end celebration, Consul General Sissel Hodne Steen and the Rio representative of Swedcham, Mr Bjørn Salen of Brazilship were also among the guests.

As usual, Brazilian churrasco was on the menu, but traditional Norwegian Christmas treats like «kransekake» was also served.

«A reference»
Despite the challenges of the last year, this is an important moment in the history of Brazil, NBCC president Camila Mendes Vianna Cardoso says.

« I went to school during the dictatorship, and I know that it makes a difference to have free institutions and a court system that is free to take the necessary measures. It shows that Brazil is a democracy. Many only see the effects on economy, but there are also important political effects – Brazil has become a more transparent country», she says.

The NBCC president does however not expect easier conditions for business in 2016.

«But maybe people will be more prepared, and a crisis is also the moment to be creative and identify new opportunities. Petrobras has done a lot of changes this year, reducing the number of contracts and people in the company, but nowadays it is such a global world and it it is difficult to say what will happen. Europe is facing huge problems with immigrants, and nowadays, everything is connected», she says.

2015 has been a good year for the Norwegian Brazilian Chamber of Commerce.

«The chamber is not going through any crisis. We lost fewer members than expected, and have found many new members, also Brazilian companies. I find it great that we now are able to attract Brazilian companies that want to be close to the Norwegian players, they want to take an active part in our activities and learn more about how Norway developed its oil and gas industry. The chamber is becoming a reference in itself, and this is important to us.»

Several events are on the agenda for 2016. This year, representatives from NBCC took part in a Brazilian delegation to Nor-Shipping in Oslo, as the first trip abroad in the history of the chamber.

«It has been a good year for the chamber where we tried to give our members the support they need at this point. We know some are experiencing difficulties, and working together, meeting more frequently and putting issues that concern the members, on the agenda has been a priority. The NBCC committees have also become stronger this year. An important task for 2016 will be the process of merging the two chambers in Rio and São Paulo. This can strengthen the chamber on a national level, and we are very keen to develop the chamber further», Mrs. Mendes Vianna says.

Here to stay
Norway´s Consul General in Rio de Janeiro, Mrs. Sissel Hodne Steen, was also among the guests. As a challenging year comes to an end, she prefers to focus on the great potential and the variety of opportunities that Norwegian stakeholders still see in Brazil.

«We should of course not underestimate the difficulties that the Norwegian business community is facing. Some might be reconsidering their business strategy, but very few are pulling out. Norwegian stakeholders continue investing in Brazil», she says.

Mrs. Hodne Steen took office in September this year, and the royal visit to Brasilia, Rio de Janeiro and Belem was the definitive highlight of the year to the Consulate General in Rio de Janeiro.

«It was a success. In my view it is of significant importance that Norway, represented on such a high level, emphasized in the meetings with Brazilian authorities and partners, that we take a long term approach, and although we are experiencing difficulties, we also see plenty of opportunities and wish to cooperate with Brazil on a variety of fields. A high level visit like this contributes to opening doors, and is particularly important in difficult times like these. A lot of important topics for the Norwegian business community were discussed during the visit, and I think that our message was heard and taken seriously. The Crown Prince had lunch with the governor of the state of Rio de Janeiro Luiz Fernando Pezão, and we have already started the follow up of this lunch. My impression is that Brazilian authorities appreciated the clear message from Norway, that we are here to stay, despite the current difficulties», the Consul General says.