The new staff in the Norwegian Church in Rio de Janeiro accepted a challenge and is back in Brazil, almost 30 years since the last time they lived here.

In September, chaplain Palle Gunnar Haarr and his wife Ester Arna Haarr arrived in Rio de Janeiro and assumed as the new staff of the Norwegian Seamen´s Church in Brazil, located in Gávea, Rio de Janeiro.

They were actually challenged by former Brazil chaplain and the current Secretary General of the church, Mr. Ørnulf Steen, to return to Brazil, as they are acquaintances for Mr. Steen and his wife Sissel, the current Consul General in Rio, from several decades ago when both families lived and worked on missionary projects in Southern Brazil.

«Two of our five sons were born here in Brazil. We lived in Florianópolis, Santa Catarina from 1980-1985  and in Laranjeiras do Sul, Paraná, from 1986-1989», the very likeable couple says. At the time they worked for Norwegian Missioinary Society, an organization that still supports projects in Curitiba and Pestano in Rio Grande do Sul.

Arna Haarr was actually preparing to retire, looking forward to spend more time with her 15 grandchildren, when Ørnulf Steen contacted them. Mrs. Arna had been working in an adult education service for immigrants the last years, with several Brazilian citizens among her students. Mr. Palle worked as an elementary school teacher, but has also done interpretation for Brazilians in Norway. Both speak very well Portuguese. 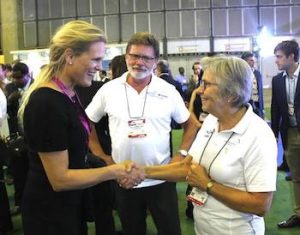 «We accepted the challenge, and are back in Brazil to close a circle.  We´ve always had a very positive impression of the Norwegian Seamen´s Church and the work this organization does around the world», they say. Arna´s mother was very active in the church all her life, and her brother was a seaman who enjoyed visiting the churches in remote ports around the world.

The Norwegian Church Abroad wants to be «a home away from home» for Norwegians around the world,

This is something Palle and Arna also want to create for themselves, and for the Norwegian-Brazilian community in Brazil.

«We hope to be useful to people, to care for people in need, and be there for everyone, also the elderly, Norwegian inmates in Brazilian prisons and the crew on Norwegian vessels. We want to offer services that they need and create activities in the church that people wants to take part in. If you have suggestions, don´t hesitate to share them with us.»

The next months they have thematic evening on the election, church services and of course Christmas celebrations on the agenda. They also hope to continue the good cooperation with Norwegian business community in Rio de Janeiro. Several companies are sponsoring the activities in the church and also uses the location for meetings, workshops and social events.

«We have met so many nice, positive people and hope for an active collaboration with the companies.»

The 15 grandchildren, friends and family in Norway is definitely what they will miss the most during their stay in Brazil. They will stay in Rio de Janeiro from 1-2 years. The security situation is preoccupying, and Rio de Janeiro is a huge city with different challenges than what they faced in the South of Brazil.

«We know that some precautions are required, but as our gardener Batista always says: «God will take care of us», they say.