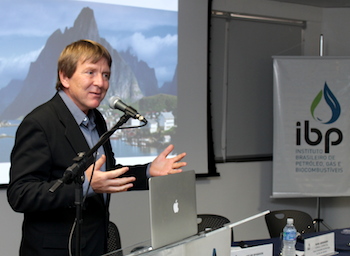 “Building a Skilled National Offshore Oil Industry” is the title of the book written by professor Helge Ryggvik, and the launch of the book in the Brazilian market is a result of the close cooperation between CNI and the Norwegian Confederation of Norwegian Enterprise (NHO).

The book was formally released in Brazil on August 21, 2014, in the IBP building in downtown Rio de Janeiro, and the event caught the interest of several NBCC members. Representatives from IBP, CNI, The Norwegian Embassy, Innovation Norway and NHO were present at the event.

The Portuguese title of the book is “Construindo uma indústria nacional de petróleo offshore. A experiência da Noruega”, and Antônio Guimarães, Executive Secretary of E&P of IBP, gave the opening remarks at the event.

“The Norwegian model serves as a parameter in the discussions, and is frequently debated in Brazil, and it is therefore important to get to know this model better, in order to improve our own model”, he said, before introducing the author.

Helge Ryggvik holds a Dr. philos degree in History at the Faculty of History, University of Oslo and has published several books and papers. He started his presentation by reminding the audience that Brazil is a larger oil producer than Norway, with a bright future.

“Norway found oil on the best imaginable time in history, after a long period of industrial growth. The shipping industry was however entering into a crisis, meaning we had both seamen and investors from the shipping industry that saw opportunities in a new market. But we also had help from other oil producing countries, and during the period of extreme investments in the late 1970-s, the Iranian revolution took place, and as a result, the oil prices increased significantly”, he said.

Helge Ryggvik emphasized the need for competition as well as openness in the industry.Dominated by foreigners
Mr. Ryggvik also talked about the “Norwegian model”, a concession model with origins in the Norwegian hydropower industry, and based on the idea that natural resources should belong to the nation. Statoil was created as a main tool to collect what Mr. Ryggvik refers to as «oil rent». The Norwegian tax system for the oil industry was created in 1974, and companies drilling for North Sea oil are paying a 78 percent tax rate on income. A significant part of the taxes in the Norwegian petroleum industry are still being paid by foreign companies. The author also discussed the importance of the Norwegian local content policies, to make sure the oil rent actually ended up in Norway, and not abroad.

“But let me be clear, foreign companies dominated the Norwegian oil industry almost totally in the 1970-s, as operators. It was only in the late 1980-s that Norweigan companies became dominant operators”, he said.

In 1973, the percentage of local content was only 18 percent in Norway. In 1977, 50 percent was reached, but since 1983, local content ceased to be measured, as it was considered high enough, and focus changed.

“The real breakthrough of the Norwegian contractor industry came in the 1990-s. In 2000, we saw a shift where the big constructions were moved abroad, while the more advanced projects involving technological innovation stayed behind. This advanced industry later became an exporting industry, and 68 percent of the revenue of such companies today is based on foreign sales. The Norwegian oil production has been falling since the peak in 2000. Despite falling production, activities in the supply sector are increasing, and the supply sector is Norway´s most important export sector”, Mr. Ryggvik said.

“Norway is among our main references, and this book tells us about critical moments and policies. The book does not give us any solutions, but we can utilize the Norway experience and how the Norwegian petroleum industry and governmental bodies handled different situations and dilemmas, how they handled local content. Hopefully we can learn some important lessons from this book”.

According to acting ambassador Sissel Hodne Steen, the Norwegian embassy values the close cooperation with Brazil in this sector highly.

“Our job is to foster a political environment for investments, and the oil and gas sector is extremely important to us. We also have plans to publish this book in Portuguese speaking countries like Angola and Mozambique, where Norway also plays an active role.”