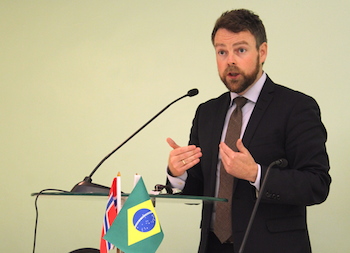 The Minister headed a 60 people strong delegation of representatives from the Ministry of Education and from a variety of universities and research institutions on a four day visit to Brazil this month.

The visit is part of the «Panorama Strategy» for cooperation on higher education and research, and the Norwegian government believes that cooperation with other countries will come to play a more important role for the further development of the Norwegian knowledge society.

«There are two reasons why increased collaboration makes so much sense. The first is that more than 100 Norwegian companies are present in Brazil, and these companies currently employ more than 22.000 Brazilians. The second reason is that we are facing global challenges that are impossible to solve without international cooperation», Mr. Røe Isaksen (in the photo) argued.

Met students
On September 22, Minister Røe Isaksen met with exchange students at PUC-Rio, and in his address to the students, he described Norway as modern, productive, technological, social liberal, wealthy, egalitarian and international society. All good reasons to go there to study.

«We are in front in areas like oil and gas, maritime and aquaculture and have institutions on a top world level», he said.

Norwegian universities would like to receive more Brazilian exchange students, and Harald Nybølet, director of SiU, a centre for international cooperation in education, explained that Norwegian universities have  a lot of programs in English. A more relaxed academic atmosphere, and the fact that a year abroad improves future career possibilites, are other factors that attract foreign students to Norway.

«I love Norway and I love the language. I am here to find out what to do to be able to fulfill a dream of mine, which is taking a Master´s Degree in Norway, says Jade Cavalcanti, a 24 year old student of International Relations, who was present at the morning event.

The Minister was also present at the opening of a seminar entitled «Sustainable Future» at PUC. In his opening remarks, Minister Røe Isaksen talked about the dual challenge the world is facing: The need for energy to help more people out of poverty and at the same time the need for this energy to be sustainable.

«There is no way we will be able to cope with the climate changes without having a technological shift. Sustainable solutions for the petroleum sector will be vital, and there is a great potential for partnerships here. The Norwegian government thinks that Brazil will become even more important in the decades to come, and I am certain that cooperation is a common interest to both Norway and Brazil.

«Knowledge diplomacy is becoming a core business for us at the consulate and we are looking forward to facilitate relevant cooperation and focus on how to match political priorities with knowledge production», Consul General Sissel Hodne Steen said in her opening remarks to the seminar.

Agreements signed
The Minister and his delegation spent four days in Brazil. In Brasilia, agreements were signed with Brazil´s Minister of Education, José Mendonçça Filho and Minister of Science, Technology and Innovation, Gilberto Kassab. In Sao Paulo, a Memorandum of Understanding on funding of common projects was signed by Fapesp and the Research Council of Norway.

A seminar on foreign policy, global governance and international cooperation took place in Rio de Janeiro on September 23. and researchers from The International Peace Research Institute PRIO, from PUC and from the Igarapé Institute were among the speakers.

This is the third Norwegian Minister visiting Brazil in less than two months. HRH Crown Prince Haakon of Norway also visited during the Olympic Games, and the high level visits are all part of the important follow up of the royal visit to Brazil in November last year.

The momentum is right to focus on Brazil, Minister Røe Isaksen said before the visit.