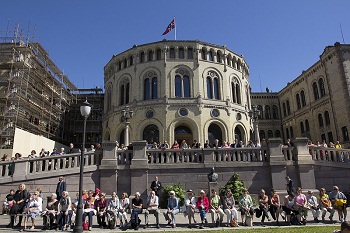 A coalition of conservative parties secured the majority in the Norwegian parliamentary elections on September 9, 2013, and although the parties are still negotiating a platform for forming a new government, it is certain that a new administration will take office within a few weeks. 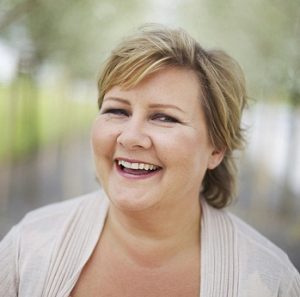 Erna Solberg. Photo courtesy of HøyreThe parties of the new government are the Norwegian conservative party Høyre and the right-wing Progress Party. The smaller parties Venstre, commonly referred to as liberals, and Krf, a party of christian democrats, chose not to join the coalition.

The outgoing center-socialist government lead by Prime Minister Jens Stoltenberg will step down after 8 years in office. Brazil has been an important partner for his administration, and Mr. Stoltenberg himself has visited Brazil twice during this period. Several of his ministers and deputy minister have also visited Brazil:

Minister of Fisheries and Coastal affairs, Mrs. Lisbeth Berg-Hansen visited São Paulo in November last year, Deputy Minister of Petroleum and Energy, Per Rune Henriksen were in Rio for the Rio Oil and Gas expo in September. In June 2012, the Minister of Environment, Bård Vegar Solhjell and the Minister of International development, Heikki Eidsvoll Holmås, were a part of the Norwegian delegation to the Rio + 20 conference. Minister of Petroleum and Energy, Ola Borten Moe visited Rio de Janeiro in May 2011, Minister of Trade and Industry, Mr. Trond Giske in February the same year, when the Brazil strategy was launched. The last high-level visit took place in March this year, when Giske’s Deputy Minister Kristin Maurstad visited Brazil.

New people will now fill the empty chairs in the ministries that traditionally have the closest cooperation with Brazil.

We know that the new Prime Minister is Erna Solberg (photo), but it is yet to be defined who takes over as Minister of Industry and Trade and Minister of Petroleum and Energy. Who will occupy the ministries of fisheries and coastal affairs and of environment is not official either.

Deforestation
The details of the political platform of the new government are not known yet, and the parties of the coalition have quite different views on several issues. The cooperation on conservation of the rainforest is one area that might suffer changes when the new government takes office.

Ciro Torres, a political scientist at IAG-PUC fears that the new, conservative government will spend less money on preservation of the rainforest.

“Norway’s contribution is vital, and the job is not done in the Amazon. Brazil needs this support. The Norwegian government has traditonally also supported Brazilian NGO-s generously, and we know that conservative, rightist parties have different views and priorities on this”, he says.

Harald Martinsen, the chairman of the Brazilian Norwegian chamber of commerce, does on the other hand not anticipate any dramatic changes.

“There is always a risk that priorities might change when new parties and new ministers enter the stage. We have seen this before, and it can happen again, but I find it unlikely. The cooperation between Brazil and Norway is solid, also on a political level, and this gives us good chances to speak up and influence processes of importance to us”. Mr. Martinsen says.

Gulbrand Wangen, the Regional Director for Brazil, India and Africa at INTSOK, thinks a new government would want to strengthen the good relationship with Brazil even further.

“I think the new government will make an effort to strengthen the long-term political and economic cooperation between Norway and Brazil even further, and concentrate the effort on the most important markets for Norwegian industry in South America. A report from Rystad Energy shows that Brazil and Norway are considered the biggest offshore markets in the world the next 4 years (2014-2017). I also think there is a chance that the new government will reconsider the ongoing cooperation on energy within the “Oil for development” program between Norway and Bolivia”, Mr Wangen says.

The Brazil strategy
Leo Doria, a Brazilian that has lived in Norway for several years and knows the Brazilian community in Oslo very well, agrees with professor Torres and says he wouldn’t be surprised if the new government chooses to reorganize the way money is spent on foreign aid.

“Norway has donated a lot of money to the reduction of deforestation in Brazil, and the project has suffered criticism back home, on whether this is a good investment or not,  whether the Norwegian investments have given results. We know that the Progress Party wants to use less on foreign aid programs, so there is a risk they will cut in this support”. Mr. Doria says.

Apart from this, he does not expect any big changes, and he says the Brazil strategy, launched by the Stoltenberg administration in 2011, has had a limited effect on the Norway-Brazil cooperation.

“I do not predict big changes. The main differences between the Stoltenberg administration and the government taking office have to do with internal affairs. Immigration is a topic were the two blocks have different opinions, but this has very limited consequences for Brazil. When it comes to trade and industry, I doubt there will be changes, and the ongoing cooperation will continue”, Mr. Doria says.