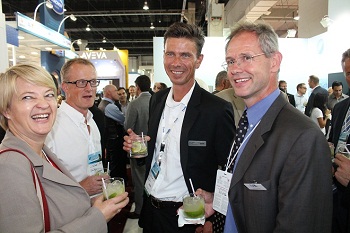 Norwegian companies seem more moderate and less optimistic about market opportunities in Brazil. Some are even considering writing off investments.

Less Norwegian companies were present at the Norwegian pavilion during Navalshore 2013. Like last year, Norwegian Maritime Exporters was responsible for the pavilion, and NME actually had to reduce the size of the pavilion due to less interest from companies in Norway.

“The promises of the Brazilian market has been over-sold to Norwegian companies, but things take a lot longer time than expected and some suppliers are experiencing enthusiasm fatigue. They are not seeing the results they expected, and are as a consequence becoming far more moderate in their approach to Brazil. The Norwegian pavilion this year is about half the size of what we originally planned. Fewer companies are present. Although some of the exhibitors from previous years have since found agents or have established a subsidiary and now have their own stand, others may have had to cut down on the marketing budget in face of the current downturn in the shipping industry. That being said, Brazil is still a promising, all be it a small market with a significant Norwegian presence”, Syver Brattested, Deputy Director General of NME says.

“Brazil is not the easiest market to operate in, especially not for small companies with limited resources. At the same time, the market growth and interesting opportunities are still here, and Brazil is too big to be ignored.  There are certainly success stories, but these days especially Norwegian media seems to focus mainly on the hardship cases. I would like to keep a balanced view on the Brazilian market: The opportunities are great, but the challenges cannot be ignored. It’s very important to develop a thorough strategy for market entry, and be aware of the required costs and time frame”, she says.

Exchange market information
Despite tougher times, quite a few companies continue to have faith in the potential of the Brazilian market and use exhibitions like Navalshore in their marketing mix. Most of the companies present at the NME stand are smaller or medium sized companies, with limited financial resources.

“It is difficult to measure the cost efficiency of being present at exhibitions like this one. According to feedback we get from our members, it is important for them to meet potential clients to market their products and services, but also to meet with each other. This way they share information on ongoing or upcoming projects. Some provide complimentary products and end up helping each other. Unfortunately, we see that many companies do not have the financial stamina to stay in the game for a longer period of time, and when they realize that it takes a lot longer than anticipated to reach break-even, they pull out and write off their marketing investments to date.”

Helle Moen recommend the use of experienced advisers.

“Dedication and staying power is of essence, and companies and owners must be realistic. Cooperating with others where this is strategically right, is also recommended. There are actually a rather extensive support system that small and medium Norwegian companies have access to, and I would recommend using it when possible”, Mrs. Moen says.

Mr. Brattestad emphasizes the dominant position of the Norwegian cluster in Brazil, and encourages patience. Several new yards are under construction in Brazil and the pre-salt developments are only just beginning.

“Norwegian companies came to Brazil at an early stage of the market development, expecting a sprint, and have found themselves as participants in a marathon. They should have known better. It is not only in Brazil that things take time. In this business, as in most other industries, one rely heavily on personal relations and a good reputation. One has to build a position stone by stone, over many years. Nothing is done overnight,” Mr. Brattested says.

The majority of the companies present at Navalshore provides rather sophisticated and high technology product or service.

“There are often elements of automation and software mixed with engineered products in the areas of propulsion, control systems, navigation and others. Quite often there is also a service providing part in it, along with the hardware.”

He mentions Eltorque as an example, a company which has developed maintenance free quarter turn electric valve actuators for flow control systems for the international shipbuilding industry based on fieldbus data communication standards.

Crowded
On the opening day of Navalshore 2013, Innovation Norway and Norwegian Maritime Exporters hosted a happy hour at the Norwegian pavilion, and the Norwegian presence is still significant. Several NBCC member companies were also among the exhibitors at the expo.

Five companies were present at the pavilion this year, but the cluster NCE Maritime from Ålesund, one of the exhibitors at the pavilion, brought six companies to Brazil and represented these six at the expo.

10 Norwegian companies are also being represented by agent Macnor Marine and about 15 Norwegian companies by MO Partners, a subsidiary of NBCC member Inventure Management. Both agents were present with big stands at the trade fair. Kongsberg, Norsafe do Brasil and Ulstein had their own stands.