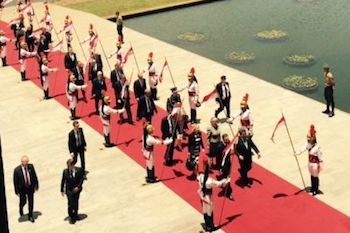 His Royal Highness Crown Prince Haakon of Norway arrived in the Brazilian capital on November 16, 2015.

In Brasília he was welcomed by the Vice-President of the Republic of Brazil, Mr. Michel Temer at the entrance of the Planalto Palace, and he also had lunch with Mr. Temer in the Itamaraty Palace.

NBCC president Camila Mendes Vianna was also part of the delegation that travelled to Brasilia on Monday.

In the afternoon, HRH Crown Prince Haakon and the Norwegian delegation participated in a roundtable conference on commerce and industry, organized by the Norwegian Confederation of Indistries, NHO, and their Brazilian counterpart CNI.

Crown Prince Haakon met with Brazilian students from the mobility program «Science without borders» at the residence of the Norwegian ambassador before leaving for Rio de Janeiro, where a busy schedule awaits him on November 17, 2015.

In Rio de Janeiro, the Crown Prince will get the chance to taste bacalhao, he will visit Cenpes, the Vard shipyard and open the new Jotun factory in Itaborai, before a formal reception at night.

Tuesday morning, he is among the keynote speakers at a business seminar at the Sofitel hotel, organized by Innovation Norway.

More on the visit will follow here on the NBCC web site.