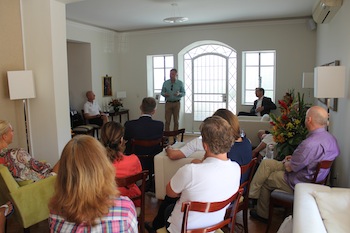 The Norwegian Church Abroad organizes seminar on cultural challenges and multicultural concerns during the Rio 2016 Olympics.

The seminar took place on August 19, 2016 in the residence of the Consul General of Norway in Rio de Janeiro. About 25 people were present for the event where cultural challenges and different sets of values were topics on the agenda. Representatives from different companies, Innovation Norway, the Norwegian Handball Federation and even some tourists were present.

The seminar was organized by The Norwegian Church Abroad, and in his opening remarks, Dennis Larsen, head of the business contact department, explained that the church has always been called the church of Norwegian enterprises, and that 230 Norwegian companies have signed agreements with the church that guarantee them different kinds of support and follow-up abroad. Originally, the church offered services to Norwegian seaman, but today, expats, tourists and students are the majority of the users.

«We experience that Norwegian businesses abroad frequently request support on how to deal with cultural challenges and religion, and this is why we would like to discuss values and culture here today – how to relate when our value sets meet a different culture», he said.

An important market
Board member Kjetil Solbrække of Rystad Energy represented the NBCC at the event, and he talked to the participants about the importance of Brazil in a global scenario, about the huge petroleum resources and about his own experiences as a business man in Brazil.

«In Norway, we have a system based on trust, and Norwegian are almost naive in the way we trust each other. In Brazil, you trust no one, and the system is based on mistrust. When doing business you involve your family, knowing you can trust them. And everyone else needs to invest a lot of time in building trust and good relations. You have to get to know people, discuss football, and spend time together before you can actually get down to business. Another feature is that Brazilians will never turn you down and they always give you a positive feedback, making it harder to know what they actually think about the service or product you are offering», Mr. Solbrække said.

Several of the participants shared their experiences on cultural differences, and work moral and the use of car belts were among the many topics brought up.

Home away from home
In the second part of the seminar, the Secretary General of the Norwegian Church Abroad, Mr. Ørnulf Steen talked about the church as a «conveyor of values in a globalized world».

«When you arrive in a new country or culture, you need to keep in mind that you are the one who is different. You have to have the will and ability to adapt, but at the same time hold on to your roots. This is our approach in the Norwegian Church Abroad», he said in his introduction.

The Church was founded in 1864, and while the church played an important part for Norwegian seaman around the world, tourists, students and expats are among the most frequent visitors and users today.

«Despite the change, the need to belong and the need to feel safe remains. In the global village, many feels the need to mark and clarify their identity and where they belong, and this is currently contributing to an increase in tension and conflict levels around the world, and as we need to find our way, respect will always be a core value, and goodwill the only thing we need to be able to cooperate well with each other. The Norwegian Church Abroad would like to build bridges and be a home away from home, but at the same time show the deepest respect for the diversity of the world we live in», he said in his presentation.

At the end of the event, delicious Norwegian waffles were served, a trademark of the Norwegian Church Abroad, and the discussions continued over a cup of coffee.