Dear members and friends of Brazil, 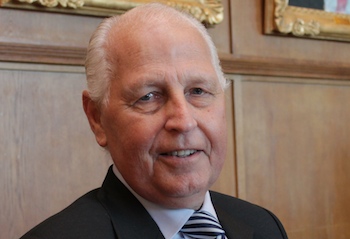 Terje was one of the pioneers in the commercial relationship between our two countries. He spent 5 years in Brazil for Det norske Veritas (now DNV GL) from 1973 to 78, an era when few Norwegians and foreigners lived there, and challenges to foreign entities and businessmen were many and quite significant. In spite of that, Terje did what so many of us have done later, he lost half his heart to this fabulous country with its warm and inspiring people.

After his return to Norway Terje was in many ways the leading promotor of the bilateral business relationship between our two countries. There was no infrastructure or organizations to lean on, so in many ways he became the institution of such relationship in Norway.

In the years to come, Terje was the engine in the work to establish BNCC as the leading forum for the bilateral relations here in Norway. He and his team gathered most of the leading Norwegian companies in the chamber, and slowly BNCC also became a voice to listen to within the political circles and establishment. Terje also played an instrumental role when President Lula (of Brazil) came to Norway in 2007 on an official visit.

He worked with a number of Brazilian Ambassadors to Norway, and it culminated in 2008 when he received the Rio Branco order, one of the highest Brazilian orders that can be given to a foreign citizen.

After 10 years as head of BNCC, he decided it was time to step down, and this was the same year as he turned 70. 70 and 10, it’s a perfect opportunity to step back was his own words.

But he continued as member of the board of BNCC, and in March 2015 he was made the first ever Member of Honour of BNCC. He was actively participating in the chamber to the very end.

In addition to being the engine of BNCC for more than a decade, Terje was also through hs personality, a mentor and inspiration to many others, and in particular to a number of young Brazilians who came to Norway to live and work.

Terje will be missed by all of us, but his spirit and enthusiasm will continue to live with us in the work he started and we will continue.

Our thoughts and sympathy goes to his family and loved ones.