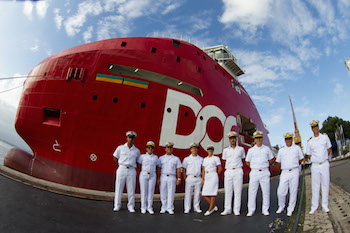 The 18.000 AHTS “Skandi Angra” was baptized on May 5th and will begin contract with Petrobras for eight years.

On May 5th, DOF ASA – locally represented by the DOF Brasil group – hosted the Naming Ceremony of the 14th vessel built by the company in Brazil. “Skandi Angra” is an anchor handler of 18.000BHP, built at VARD shipyard in Niterói and received by DOF to begin a eight-year contract with Petrobras.

A new generation high-powered anchor handling vessel, “Skandi Angra” is designed for field installation operations across a wide range of water depths and environmental conditions, such as pre-salt operations. The vessel is equipped with DP2 system, which allows more control and agility when positioning and heading the vessel. It reaches up to 16 knots of speed and comes with Comfort Class, technology that reduces noises and vi- bration at the cabins. Besides that, the AHTS has a 280t bollard pull capacity, a high figure, taking into account the compact size of the vessel (93,5 meters of overall length). The vessel also brings the Safer Deck Operations system, developed to enhance anchoring operations performances, guaranteeing more safety through a more covered winch and shaft control.

Besides its 14 Brazilian vessels, DOF also operates other 10 foreign vessels throughout the national waters. The AHTS is part of DOF newbuilt program of three anchor handlers, built in Brazil and already under contract with Petrobras: Skandi Urca, operating since April 2014, and Skandi Paraty, to be delivered until the end of this year.

Mr. Helge Mogster and Godmother Katia Chafic Haddad.DOF Brasil represents Norskan Offshore and DOF Subsea Brasil. Both companies are part of DOF ASA, a Norwegian com- pany which operates more than 70 offshore and subsea vessels around the globe. With more than 30 years of operations, the DOF group is at the leadership of its segment regarding experience, innovation, variety in solutions, technology and capabil- ities. The group’s core-business is focused on vessel management, projects, engineering, maritime operations, survey, IRM, diving, among others. From PSV to subsea engineering projects, DOF offers a wide scope of high-quality offshore services, contributing with the O&G industry constant growth and its high expectations and demands. DOF offices can be found all over the world: Norway, UK, USA, Brazil, Angola, Argentina, Egypt, Singapore and Australia.

In the country for more than 10 years, DOF Brasil is a reference for the offshore and subsea market, operating a state-of-art fleet of 24 vessels, 5 in construction, approximately 1.500 employees and offices in Rio and Macaé. The group represents the Brazilian companies Norskan Offshore and DOF Subsea Brasil, responsible for marine management and subsea operations, respectively. The group’s newbuilt program counts on 4 new PLSV and one more AHTS.