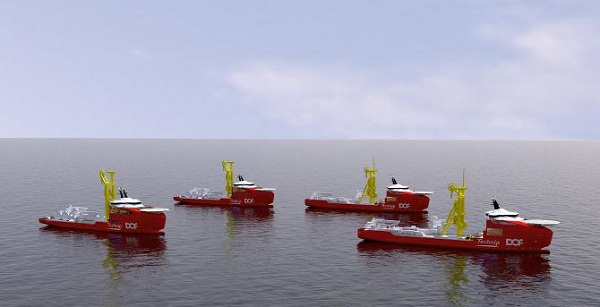 One of the biggest contracts ever won by a Norwegian company in Brazil.

DOF Subsea and Technip has been awarded a major contract for four new pipelay support vessels by Petrobras. In a press release the joint venture owned by DOF Subsea and Technip inform that the contracts cover the construction of four new pipelay support vessels (PLSVs) and operation in Brazilian waters to install flexible pipes. The combined value of the contracts for the DOF Group is approximately NOK 10 billion. Technip said its portion of the contracts was worth about 1.35 billion euros ($1.80 billion).

Two of the PLSVs will have a 300-ton laying tension capacity and will be fabricated in Brazil with a high national content. The other two vessels will be designed to achieve a 650-ton laying tension capacity, thus enabling the installation of large diameter flexible pipes in ultra-deepwater environments, such as the Brazilian pre-salt. Vard Holdings Limited (“VARD”), one of the major global designers and shipbuilders of offshore and specialized vessels, will be in charge of the design and construction of the four PLSVs.

Under the DOF Subsea/Technip joint venture agreement, Technip will manage flexible pipelay and Norskan S.A., a DOF ASA subsidiary, will be responsible for marine operations. Delivery of the PLSVs is scheduled for 2016-2017. Contracts will last eight years from start of operations, and could be renewed for another eight-year period.

Mons S. Aase, DOF Subsea’s Chief Executive Officer, declared: “The contracts confirm that our co-operation with Technip on the Skandi Vitória and Skandi Niterói have been successful, and reinforces our position as a leading provider of offshore vessels to the Brazilian O&G industry. It comes as a result of our long-term focus on the Brazilian market and is an acknowledgment of the expertise of our employees.”

Frédéric Delormel, Technip’s Executive Vice President and Chief Operating Officer Subsea, added: “This strategic contract reinforces our subsea leadership in Brazil and our long-term relationship with Petrobras. We are confident that these new state-of-the-art PLSVs, including two with the most important flexible pipelay tension capacity in the world – 650 tons – will be key assets for our client to successfully achieve its projects offshore Brazil.”

Roy Reite, VARD’s Chief Executive Officer and Executive Director commented: “I look forward to working with Technip and DOF on these milestone projects. VARD yards both in Europe and Brazil being chosen to build these vessels illustrates the value of having a global presence when working with international clients, and bringing leading edge technology to new markets.”

About the DOF Group

DOF Subsea is a part of the DOF Group. With a multi-national workforce in excess of 4,000 personnel, the DOF Group is a global group of companies which owns and operates a fleet of more than 70 modern offshore and subsea vessels, and has the engineering capacity to service both the offshore and subsea market. With over 30 years in the offshore business, the Group has a strong position in terms of experience, innovation, product range, technology and capacity.

Technip is a world leader in project management, engineering and construction for the energy industry. From the deepest Subsea oil & gas developments to the largest and most complex Offshore and Onshore infrastructures, our 38,000 people are constantly offering the best solutions and most innovative technologies to meet the world’s energy challenges.

Present in 48 countries, Technip has state-of-the-art industrial assets on all continents and operates a fleet of specialized vessels for pipeline installation and subsea construction. Technip shares are listed on the NYSE Euronext Paris exchange and traded in the USA on the OTCQX marketplace (OTCQX: TKPPY).

Vard Holdings Limited (“VARD”), together with its subsidiaries (the “Group”), is one of the major global designers and shipbuilders of offshore and specialized vessels used in the offshore oil and gas exploration and production and oil services industries. Headquartered in Norway and with 10,000 employees, VARD operates ten strategically located shipbuilding facilities, including five in Norway, two in Romania, two in Brazil and one in Vietnam.

VARD’s long shipbuilding traditions, cutting-edge innovation and technology coupled with its global operations ensure access to the fastest growing oil exploration markets. The Group’s expertise and track record in constructing complex and highly customized offshore and specialized vessels have earned it recognition from industry players and enabled it to build strong relationships with its customers.

VARD was listed on the Main Board of the Singapore Exchange on 12 November 2010. Majority shareholder Fincantieri Oil & Gas S.p.A., a wholly owned subsidiary of Fincantieri – Cantieri Navali Italiani S.p.A., owns 55.63% in the Group. Headquartered in Trieste, Italy, Fincantieri is one of the world’s largest shipbuilding groups and has, over its 200 years of maritime history, built more than 7,000 vessels.