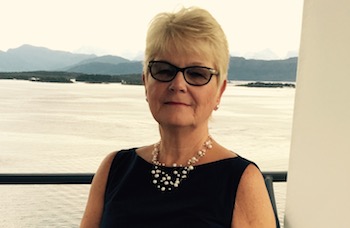 Mrs. Hodne Steen is a familiar face to many in the Norwegian-Brazilian business community in Rio de Janeiro, and after 4 years as the Minister Councellor and Deputy Head of Mission at the Norwegian Embassy in Brasilia, she is no newcomer to Brazil.

The new Consul General actually travelled to Brazil for the very first time back in 1978, with her eldest daughter then 10 months old. Her son was born while Sissel and her husband were living in the indigenous territory of Guarita in the state of Rio Grande do Sul almost 40 years ago.

«The plan was to return to Oslo, but when the vacancy surged, I saw it as a great opportunity to use the experience and competence that I had gained from living and working in the country over the years. Concluding my career in Rio de Janeiro would be a great way of closing the circle. The fact that I was appointed General Consul makes me feel privileged», Sissel Hodne Steen says in this interview with NBCC.

Triggering
The Norwegian indigenous support program, managerial work, political contacts and reporting were among Mrs. Steen´s responsibilities at the embassy in Brasilia, and she considers the Consulate General a new career challenge and looks forward to taking the helm at the general consulate.

Sissel and her husband Ørnulf Steen.«It is a new challenge. These are challenging times and the current situation in the oil and maritime sectors is difficult, but this is something that motivates and triggers me. As a consequence, the Norwegian Consul General in Rio de Janeiro might be facing new challenges as well. My impression is that the Consulate General enjoys a lot of respect and has significant «capital» in its relations with the business community. This is something I will build on and wish to develop even further. The challenging situation demands even closer cooperation  – to identify new opportunities and be a part of the future development. We need to bare in mind that new opportunities always emerge from difficult situations», Mrs. Hodne Steen says.

Team Norway and the way the Norwegian players work together, is a great strength to the Consulate General.

«Working closely with important stakeholders in Team Norway; the Norwegian Embassy, Innovation Norway, the Norwegian Shipowners´ Association as well as the Norwegian Church Abroad and others, is also something I look very much forward to. I would also like to strengthen the analytical work of the General Consulate even further by strengthening our network with for instance think tanks and academia.»

International focus
Sissel H. Steen was born in South Africa and moved to Norway when she was 10 years old. Her career has always had an international focus, and she has also worked in Tanzania. She graduated as a nurse, with later degrees in nutrition and health administration. She worked in Digni, an organization coordinating the cooperation between 19 churches and mission societies which receives support from the Norwegian Agency for Development Cooperation (Norad) and Norad. At the Diakonhjemmet Hospital International Center in Oslo she was part of the creation of a center for health and social development.

From 2001, Mrs. Steen worked in the Norwegian Agency for Development Cooperation (Norad) where she filled positions as assistant director general and policy director. She came to Brasilia from Norway´s permanent mission to the UN and International organizations in Geneva where she was responsible for health issues.

«I am not the traditional «career diplomat», and came to Brazil for the first time in 1978. The early years in Brazil and the time we spent in the Guarita indigenous territory, shaped me as  a person and has given my career direction. I think it is an advantage to have a longer term experience and perspective when analyzing the current situation. Right now we are witnessing quite dramatical changes, that we were not at all expecting a few years back. I am quite familiar with Brazilian politics as well as the political framework that the industry needs to relate to, from my work in Brasilia, and being able to respond to the needs of the Norwegian companies operating in Brazil, is a priority in the General Consulate´s work. Creating an even stronger connection between Norwegian businesses and investors, from the General Consulate´s perspective, and the political reality of Brazil, is something I find important and a line of work where my experiences from Brasilia will be useful. Close cooperation with the Embassy there is a “must”.»

«Norwegian» values
Although Sissel is used to being far away from home, certain things and certain people makes her feel homesick. She has a son, who currently works in Brussels, a daughter and three grandchildren back in Norway.

«As I was born and raised in South-Africa, international questions have always interested me and been a big part of my personal and professional life. But my roots are in Norway, and what I miss the most when I am abroad, is my family and friends. Obviously, I will miss my husband who left Rio short time before I arrive, a lot!  But that´s life, and to us it was important to give each other space at this point. Living abroad also gives you an opportunity to reflect on what you value from your own country. In my case that is especially how equality is valued in the Norwegian society, our welfare state and how we value solidarity. I also miss to be able to accompany the political reality in my home country up close. But this has become so much easier over the years. When I lived in Brazil in the 1970-ies, we had to travel 70 km to call home.»

Sissel Hodne Steen has become very fond of Brazilians, their culture and way of life over the years, and says she is fond of people in general. When she is not working, she relaxes with a good book. She is also fascinated by music, and attended regularly concerts by the Symphony Orchestra of Brasilia when she was living in the Brazilian capital.

«I love music. Brazilians in general are also very fond of music and this is something I appreciate deeply.»

She also appreciates how Brazilians are open and easy-going.

«The ability to drible their way towards a goal is a good expression of the Brazilian way of life. Sometimes there are detours or delays, and you might wonder if they will ever score a goal, but it is fascinating how Brazilians always seem to get there in the end. Remember the scepticism before the World Cup. I never doubted that Brazil would host a great championship. You might object that this also has negative aspects, but there is no doubt that Brazilians are open, easy to relate to and communicate with, and after so many years in Brazil, I also feel that I manage to read them quite well.»

Royal visit
There are plans for a visit by the Norwegian Crown Prince Haakon and Crown Princess Mette-Marit to Brazil and Rio de Janeiro in November. Preparations have kept Mrs. Steen busy from the day she takes office.

«A Royal visit is important for Norway´s visibility in Brazil and we hope the visit if it takes place as planned, will contribute to improving the relations between our two countries even further, and that it will contribute to develop even better conditions for Norwegian business and investments in Brazil.»

«And next year, Rio will host the Olympic Games, meaning that the agenda is packed with extraordinary events this first year», she says. However, the long term work that the General Consulate engages in as a hub for the business community and Norwegian citizens in general will have a priority.

«I am really looking forward to work as General Consul serving and working together with the business community in Rio to identify where the general consulate may make a difference and add value – together with the great staff that we have at the general consulate. I must also hurry to mention Innovation Norway and Norwegian Seafood Council – the close and daily cooperation with these will be extremely important for me. I also hope to meet a lot of you socially», Sissel Hodne Steen says.