«Energy and environment are the main pillars» 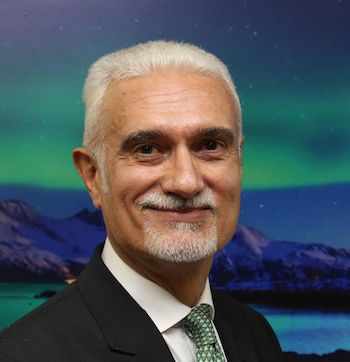 Norway is far from his first posting abroad. In 2011 he was appointed Brazil´s ambassador to Prague, and he has also worked as Minister Counselor in Stockholm and held different positions at the Consulate General in New York and the embassies in London, Madrid and Beijing. The new Brazilian ambassador to Norway was born in Fortaleza and has a degree in Communication and journalism from the University of Brasilia. He also held several positions in the Brazilian Itamaraty. Tourism was a focus in his early diplomatic career, and he visited Norway as a tourist 15 years ago. He sees the impressive nature as one of many things Brazil and Norway have in common, and has accompanied the Norwegian-Brazilian relationship from afar throughout his career.

«I see two main pillars in our relationship: Energy and environment. From there you can naturally work to strengthen our cooperation in areas like science and technology and education. But of course there is much more than that, like shipping and mining, for example», Mr. George Monteiro Prata says in this interview with Nordic Light.

In March he met with the NBCC board during a visit to Rio de Janeiro, and in May he will meet many important players again at Nor-Shipping in Oslo.

«Nor-Shipping is the most important forum for maritime players from all over the world. Not only it provides a great opportunity for discussion of the main issues and projects of common interest between our two countries but it also allows the participants to meet stakeholders from many other different countries», he says.

Mr. Monteiro Prata believes that crisis that paralyzed the global oil and gas industry is passing, and do not expect it to affect his work for Norwegian-Brazilian relations.

«I believe that I arrived in Oslo when the worse of the crisis was getting behind us. It is now time to share the lessons we have learned and to discuss the new opportunities we have. I am sure that the crisis will bring new ways of cooperation between Brazil and Norway», Mr. Monteiro Prata says.

Explaining foreign investors and other stakeholders what is actually happening in Brazil, has been a challenging task the last years. This is also a challenge the new Ambassador expects to face

«Brazil is a multifaceted country that is changing rapidly. I have to be able to explain what is going on in Brazil today and to show the new opportunities arising from this change.»

He considers the relations between our two countries as very solid on several fields. Oil, gas and energy, environment, aquaculture and defense are some areas where there is cross country collaboration.

«Our relations are very good but of course there is always room for improvement. Both Brazilians and Norwegians are working hard on that and I am very proud to be part of this effort», the ambassador says. And although Brazil is a giant compared to Norway, he is quite clear on Norway´s importance.

«Norway is a leading country in promoting peace, human rights and sustainable development. Norway is a big investor in Brazil. Norway is our biggest partner in the Amazon Fund. Norway has the biggest sovereign fund in the world. Brazil has never beaten Norway in the World Cup. Should I say more?»