Fact-finding mission to the south 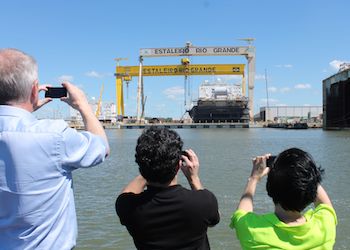 Norwegian industry is taking a greater interest in the vast business opportunities presenting themselves in the Rio Grande naval hub.

The Norwegian delegation at the Quip shipyard.The flourishing Rio Grande naval hub is described as vital to Petrobras, and attracting foreign investors to the region is a top priority to local authorities. Rio Grande is currently the second biggest naval hub in Brazil, only smaller than the Rio de Janeiro region, and Petrobras has placed 36 percent of its shipbuilding orders in this region.

During the Naval Cluster Fair in Rio Grande from March 11-14, a big Norwegian delegation visited the region, on a fact finding mission, as director of Innovation Norway in Brazil, Helle Moen said.

“We are here to see how we can expand our business in Rio Grande do Sul, and present the Norwegian companies to the industry in the region. It is a fact-finding, but also a fact-giving mission”, she said. The delegation met with important stakeholders in the local oil, gas and maritime sector, and it was an objective to Intsok and Innovation Norway that the program should be beneficial for the companies in the preparation of a business entry strategy for Rio Grande do Sul.

Dependency
During the official opening of the Naval Cluster Fair 2015, Paulo Alonso, special adviser to Petrobras president Graça Foster, described the Brazilian naval industry as “of critical importance” to Petrobras, and the shipbuilding activities in Rio Grande are considered vital in the company´s effort to double the oil production by 2020.

Seaside view to the Estaleiro Rio Grande.“The Rio Grande naval hub is the greatest example of the ongoing revitalization of the Brazilian shipbuilding industry, and the industrial policy of the state of Rio Grande do Sul is an example to follow by other Brazilian states. Rio Grande is vital to Petrobras. We find a great concentration of expertise here. It is clear to the top management of Petrobras that if the shipbuilding industry does not deliver, there is no way we will be able to increase the production, and we will not be able to respond to the task given to us by the Brazilian society, the task of exploring the pre-salt oil for the mutual benefit of us all”, Mr. Alonso said.

Yard visits
In 2005, the Quip shipyard was the first to establish in Rio Grande, and the regional naval hub has not stopped growing since. Several platforms and offshore vessels have been built at the yards in the city, and the next major task for Quip are the FPSOs P75 and the P77. Quip actually made the headlines last year for having three platforms under construction at the same time, and the platforms built at Quip and delivered to Petrobras in 2013/2014 will increase the company´s oil production by 25 per cent.

Governor of Rio Grande do Sul, Mr. Tarso Genro (to the left), was present at the official opening of the Naval Cluster Fair 2014, and met with Norway´s consul general Helle Klem and the leader of the Norwegian delegation, Gulbrand Wangen (to the right).The Norwegian delegation visited the main shipyards in the region, and several of the participating companies are already supplying the yards with their equipment. Eaton Hernis have supplied all the vessels built at the Quip shipyards with their CCTV systems, and is currently negotiating contracts for the P75 and P77. Norsafe lifeboats will be to find on the  P66, P67, P68, P69, P70, P71 and P72 FPSOs.

Gulbrand Wangen, the regional director for Brazil of Intsok, was the leader of the Norwegian delegation. A total of eight companies were represented on the mission: The above mentioned Eaton Hernis and Norsafe, Aptomar, Palfinger, SubSea North, IKM Testing do Brasil, Marine Aluminum and Kongsberg Maritime do Brasil.

“What we see here in Rio Grande is that everyone, that is both local and federal authorities, the yards, different institutions, the unions, is working together to strengthen the naval hub and to strengthen Rio Grande do Sul as the major shipbuilding state in Brazil. Both the naval cluster and the supply chain here is stronger than what I expected. There should be opportunities for Norwegian suppliers, but those who aren´t already established in Brazil, will probably experience difficulties at this point. We do however need to make Norwegian suppliers more aware of what is going on in this region. Finding a local partner could be a good strategy, something Norsafe and Palfinger have done with great success”, Mr. Wangen said.

“Industrialization is a priority to the state of Rio Grande do Sul, and the naval industry is one of the sectors where we see the greatest potential. The federal government decided to establish and support a naval cluster here in Rio Grande and strengthen the shipbuilding industry in this region. The state has created several policies and programs to participate in this effort, and I am coordinating these initiatives. I try to get involved as a facilitator and meet with foreign investors, that might have knowledge and technology and that are interesting in teaming up with the local industry. The objective is always to diversify the hub and make us less dependent on the large shipbuilding projects. We want to create a cluster of smaller and medium sized companies as well, that can sell their products to the whole world, not only to Petrobras. I have had the pleasure of visiting Norway myself and I am here to show you that the state government is interested in helping companies that could diversify the current business environment in our state”, Mr. Grill said.

The Norwegians also met with the mayor of Pelotas, the neighboring city to Rio Grande, who talked about how the naval industry is mobilizing the whole region.

From the left: Jan Kleivene of Eaton Hernis, Leila Trabbold of Norsafe and Adhemar Freire, the local Intsok adviser for Brazil.“Pelotas would like to welcome Norwegian investors to our region. Pelotas has six universities, so we are educating highly qualified manpower. Our proximity to Rio Grande makes Pelotas a place to look for new ventures. Land costs are lower here, and we have a lot of land available. Pelotas wants to be a part of the boom that Rio Grande is experiencing”, Mr. Leite said during a meeting with the Norwegian companies.

A special event was organized for the Norwegian companies during the Naval Cluster Fair on Tuesday March 11. Aloísio Nóbrega, vice-president of the regional development and investment agency (AGDI) outlined the comprehensive plan to increase the number of orders placed in the local shipbuilding industry.

“The offshore and shipbuilding industry is a focus sector to the state of Rio Grande do Sul, and we have been working on this since 2011. There is always a competition among the states to attract investments, and we can also offer tax incentives”, he said.

“We would also like to attract the naval repair industry. There are very few repair shipyards in Brazil. We have a very strong manufacturing base here, but need technology and partnerships with foreign companies. We would like to see more companies doing what Palfinger and Koch have done”, he said. Last year, Norwegian crane producer Palfinger Dreggen teamed up with the Brazilian company Koch Metalúrgica, and the joint venture will start manufacturing offshore cranes in Porto Alegre shortly.

Maintenance and retrofit
Roney Parente from Marine Aluminum, based in Haugesund, Norway, came to Brazil with the ambition of strengthening the ties with Brazil. Marine Aluminum manufactures helidecks and telescopic gangways.

“We would like a closer relationship and create synergies. It surprised me that the yards are not thinking about retrofit, that is the renovation and maintenance of old platforms. There are about 80 platforms in operation in Brazil today, and these are going to need maintenance.”

Mr. Parente was even arguing for the increased use of aluminum instead of steel in the vessels, and see opportunities in the Brazilian market. He is in talks with Petrobras, and would like to see the company opting for aluminum, as the material is lighter and does not need the maintenance that steel needs.  Marine Aluminum is currently a global market leader in the manufacturing of gangways.

“Today the yards are thinking CAPEX, and not OPEX. In the long run, aluminum is a better choice when you consider operational costs, and I would like to share the experiences we have done in Norway. It is only a question of time for the Brazilian market to see the advantages as well.”

Daniel Garrido of IKM Testing to Brasil, a company that do commissioning services, shutdown and maintenance work on FPSO units, will follow up the visit to Rio Grande with the procurement and supply departments of the Rio Grande yards in Rio de Janeiro, and found the visit very relevant.

Åge Eikså of Subsea North, a company that offers technical training, was in Brazil to try to map the Brazilian needs, and also met with Senai in Porto Alegre during the mission to the south.

“The lack of qualified manpower is a problem to all the players we have met, and a problem with great consequences to the industry. Subsea North represents Trainingportal/Mintra, that offers over 300 courses , and we are looking for needs, facilities and collaborators in Brazil”, he said.