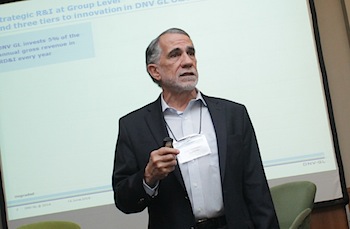 Celso Raposo and Luiz Fernando Oliveira.Even in a low oil price scenario, Brazil is in a privileged position when it comes to research and innovation, according to DNV GL.

On June 16, 2016, DNV GL hosted an Innovation Day in Rio de Janeiro, for stakeholders representing oil companies, the service supply industry and consultancy companies like DNV GL. The event is becoming a tradition as it took place for the third time this year. Similar events were also organized in 2013 and 2015, and several profiled speakers contributed with their views and insights.

«Innovation is in the core of DNV GL, and personally, I would say that R&D is my life. It is therefore a pleasure to welcome you to this seminar. Innovation is more important than ever, and it is through innovation we will make progress», Acting Regional Manager Celso Raposo said in the opening remarks to the seminar.

In the first panel, Luiz Fernando Oliveira, Manager at the DNV GL R&D Center Rio, presented the current innovation and research themes in the DNV GL organization worldwide. He argued that R&D enjoys a privileged position in Brazil.

«Despite the downturn, DNV GL keeps investing 5 percent of our revenues a year in research, development and innovation, and in international terms we are in a privileged position in Brazil, thanks to the 1 percent clause obliging companies to invest 1 percent of the revenues in research. In general when the market is down, funding for research decreases. Because of the 1 percent obligation, this does not affect us that much here in Brazil. There is a reduction in revenues that are generated, but the obligation guarantees money for research in the oil and gas sector», Luiz Fernando Oliveira said.

DNV GL concentrates its efforts in four business areas – maritime, oil and gas, energy and certification, and Mr. Oliveira focused on the oil and gas division in his presentation. Service development to the industry, Joint Industry projects (JIPs) and something Mr. Oliveira called «Step Change Innovation» are focus areas for the O&G division.

«Offshore safety is something we are working with at the R&D Center here in Rio. We study the application of safety and reliability to operational problems, and believe that we can add value by improving operational decisions. Subsea production systems, such as the subsea factory proposed by Statoil, is an area we are dedicating a lot of attention, together with other technologies that will be the prevailing ones for future safe and reliable operations. In the case of subsea production it is necessary to design for high reliability and modular redundancy as repair on the seabed is more complicated», he said.

«Step change innovation» is a program that DNV GL created this year, aimed at developing digitalized solutions and business models.

«We believe that digitalization will transform the oil and gas industry. The industry still has a lot to learn, and the winners will be those who learn fast and manage to take new positions quickly. We want to create new digital platforms for interaction with clients and promote more interaction between different stakeholders», he said.

Luiz Fernando Oliveira also talked about the JIPs in progress, and explained that every year, DNV GL generates about 200 JIP ideas. About 40 ideas are tested, and 30 are actively promoted. The ambition is to start 20 new JIPs every year.

«This is a process we conduct every year and it is one of the ways we keep the process of innovation going on. There is a lot of interest from the companies, and the goal is always to cut costs, arrive faster at solutions, developing valuable knowledge and streamlining processes by establishing new, leading industry standards.»

Innovation that contributes to reducing cost and increasing efficiency is particularly important in challenging times when funds are short.

«It is very important that we engage in this kind of innovation at this point, no doubt about it», Mr. Oliveira said.

Luciana Maria Souza de Mesquita.ANP requirements
Luciana Maria Souza de Mesquita, Adjunct Superintendent at ANP, was invited to share ANP´s perspectives on research, development and innovation in the Brazilian oil and gas industry. She talked about the huge Brazilian reserves and explained the ANP 1 percent clause, demanding that oil companies use 1 percent of their revenues in R&D, before detailing the requirements in the new ANP regulation under implementation. One example is that more funds can now be used on technological innovation. Funds can also be used on training, qualification of personnel, prototypes etc.

«About 11 billion BRA per year are invested in R&D, a considerable amount, and until now Petrobras has been the main investor, but we see an increasing participation of other companies», she said.

The ANP executive also explained how a project should be structured, and presented to the new scientific committee created by ANP together with the industry.

Meeting place
Several Joint Industry Projects between DNV GL and the industry were also presented during the seminar.

«For DNV GL, innovation is very important and an important part of our development as a company. The idea here today is to bring together different stakeholders that are interested in the type of innovation that we produce. We also want to listen to the market to map what the market wants in terms of innovation. What are their proposals and what are they doing? We want to exchange information related to innovation», Mr Oliveira said.