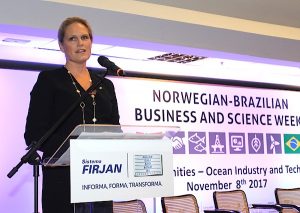 Synergies and opportunities for collaboration on the agenda when Norway and Brazil organize first joint ocean seminar in Brazil.

The seminar took place in Rio de Janeiro on November 8, 2017, and was one of the main business events during the first Norwegian-Brazilian Business and Science Week, which featured 14 different events in 4 Brazilian cities.
The one-day ocean seminar featured several high profiled speakers, and while the ocean literally unites Norway and Brazil, the so called ocean industries are strong in both countries, with common interests in oil and gas, fisheries and aquaculture, transport and research. Norway has 6 times more ocean than land, and the seminar aimed to strengthen both cross-border and cross-industry collaboration.
Deputy Minister Ingvil SminesTybring-Gjedde from Norway´s Ministry of Petroleum and Energy opened the seminar with a presentation of the ocean strategy of the Norwegian government, launched earlier this year. 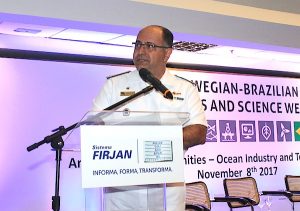 «The Norwegian government wants to make sustainable use of ocean a global priority, and we are putting the ocean at the top of our political agenda. According to OECD, the ocean could double its contribution to the world economy by 2030. In Norway, the ocean industries account for more than 70 percent of our export earnings. We expect that knowledge transfer across ocean industries will increase, and it is fundamental to use synergies to create new growth, employment and innovation. We want to realize this potential in a clean and sustainable way.Norway and Brazil both have long coast lines and we can learn from each other´s ocean experiences», Mrs. Smines Tybring-Gjedde said.

In his presentation, Vice-Admiral Wilson Pereira de Lima Filho, the director of the Brazilian directorate of ports and coasts, DPC, showed that Brazil has 4,5 million km2 of ocean space, often called the Blue Amazon
«I admire your maritime mentality. Like Norway, Brazil completely depends on the ocean for transport, commerce, fisheries and for oil and gas, and the future is promising, but a sustainable use of the ocean is a concern to us», the Vice-Admiral said in his opining remarks to the event.
Huge growth
To set the stage before the following panels, Vice-President of Environmental Technology at SINTEF Ocean, Mr. Tore Aunaas, was invited to talk about the ocean economies towards 2030. In 2010, the global ocean economy had a 1,5 trillion USD contribution to the world economy and the ocean economy stood for 2,5 percent of the gross value added for all economies. Norway is however a big player, alone behind 7 percent tot the ocean based economy», Mr. Aunaas said. 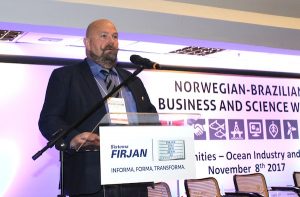 According to OECD estimates, the ocean economies will double in size until 2030, and huge growth is expected within sectors like offshore wind and aquaculture.

«71 percent of the globe is covered by water, but the lack of ownership make these areas less favorable for sustainable development. Ocean economies are very different from terrestrial. We see that ocean based value chains are starting to interact, and new and enabling technologies will representative disruptive changes. But is is also a question of balance. How can we develop without adding pressure», Mr. Aunaas asked.
The following session provided an outlook on the Brazilian oil and gas market. By September 2017, the daily oil production in Brazil was 2,65 million BPD, more than half from pre-salt wells, and exploratory activities are now being resumed after a very slow period. But according to ANP advisor José Gutman, Brazil still needs to create incentives and revise regulations in order to attract new investments before oil loses relevance as energy source in a low carbon scenario.
Country Manager of Exxon Mobile in Brazil, Mrs. Carla Lacerda was the first to share her vision and the main challenges for further development of the Brazilian oil and gas sector.
«It was the pre-salt opportunities offered to the industry in the first time in over a decade that allowed us to come back. The re-opening of the sector enables partnerships that enable further investments of more resources to be developed, resources that otherwise potentially would have stayed in the ground. It brings technical experience to Brazil, and is a fantastic opportunity to the service sector», she said. 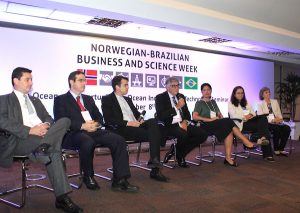 Veronica Coelho, Vice-President of Statoil do Brasil talked bout the technological challenges in E&P on the different blocks in the Statoil portfolio and said that further progress on the regulatory agenda is fundamental. Increased recovery (IOR) is a priority to Statoil.

«IOR cooperation could unlock huge values. A 1 percent improvement means 2 billion barrels more produced, and it could make a massive difference in Brazil.»
As a representative of the service industry Marcelo Xavier, Vice-President of Subsea7, argued that the industry needs to anticipate needs and problems to unlock potential. An integrated approach is his advice. Richardo Serafim, Vice-President of Business Development of Aker Solutions, says his company is prepared, and that an integration between Norway and Brazil is fundamental to keep his company prepared for the pre-salt age.
«I want to see Brazil creating technology to help the ocean economy», he said.
Crossover strategies
During the session on new maritime technologies, Jonas Mattos from DNV GL focused on how digitalization and data processing will change the maritime industry and ways of doing business. Alternative fuels and hybrid solutions was another topic he addressed.  Jan Tore Linstad (Kongsberg Maritime) talked about Kongsberg´s approach for providing useful data for cost efficient operation.
«Digitalization is a buzz word, but digitalization also provides us with tools that can help us move forward, and to do more for less in a sustainable and environmentally friendly way», Mr. Linstad said. Digitalization will eventually enable autonomy, adding further value.
Felipe Meira is the managing director of OSV operator SolstadFarstad. In his opinion, technology investments do not pay off in the current Brazilian market, as high tech vessels have higher day rates. He also argued that regulations need to keep up with technology to avoid bottlenecks.
«My company has invested a lot in technology, in automation and monitoring, and I am very proud of this. But we need to make these investments the winner in the market», he said.
José Elias, managing director of Teekay, talked about the environmental benefits of technology and how technology will reduce the exposure of both people and environment to risk. Marcelo Martins, director of CBO and Christiane Marsillac, CEO of Mercosul Line were also part of this panel.
The huge potential in the ocean economy was addressed in first of two afternoon panels, and in his keynote Owe Hagesæther, who is the CEO of GCE Subsea, shared the Norwegian subsea cluster´s crossover strategies and experiences on implementing the Ocean strategy that the Norwegian government launched earlier this year.
«Everything we have learned, originates from the oil and gas sector, and to capitalize more on this, we are now transforming technologies and knowledge to speed up and innovate related industries like seafood farming and offshore renewables», he said.

Mr. Hagesæther also outlined some of the initiatives in his keynote.

«GCE Subsea has organized workshops, lectures and seminars on aquaculture, and mapped the challenges to find out where the oil and gas industry could contribute with knowledge and solutions. We want to match oil and gas knowledge with aquaculture to develop the next generation seafood farms. One example is the use of sensors and integrated monitoring.»
GCE Subsea has also created an ocean industries accelerator, an incubator for start-up cooperation, as well as initiatives to speedup commercialization of innovation.
Results are positive, according to Mr. Hagesæther.
«Several companies have managed to enter new sectors or have plans to do so. This is also a way to bring down operational risk, giving you more than one leg to stand on, so it definitely works», he concluded.
Peter Due, Director of Autonomy at Kongsberg Maritime, talked about autonomy as a global game changer, and presented the first autonomous, zero emissions, ballast free container feeder «Yara Birkeland».
The two presentations were followed by a panel debate. Gustavo Castro, Production Engineering R&D General Manager at CENPES gave examples from similar initiatives in Brazil.
Paulo Esperança, executive director of LabOceano of COPPE/UFRJ talked about how COPPE and Petrobras cooperate closely, while José Macher, senior analyst of the Brazilian innovation agency Finep talked about the existing tools for «matchmaking». He also talked about the joint calls for research funding, a cooperation between Finep and The Research Council of Norway. Karsten Sæthre, Head of South America of Norwegian bank DNB was also part of the panel.
Green solutions
Stephane Dezaunay opened the last panel of the event «An Ocean of Green Solutions». He is country manager of PGS in Brazil, and shared some of the green initiatives his company is behind. Reducing the environmental footprint is a concern to the industry and PSG vessels are involved in the collection of plastic from the oceans by blowing it up to the surface. Ernst Meyer from DNV GL Maritime talked about sustainable business and maritime opportunities, and listed several «opportunity areas» in a study conducted by DNV GL. Erik Ianssen representing the cluster NCE Maritime Cleanteck talked about alternative fueled vessels, and shared plans for ferry transport between Rio and Niteroi with battery driven ferries. 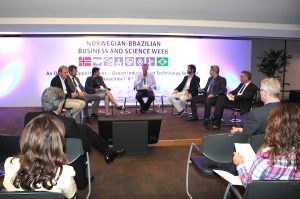 Haakon Lorentsen was the moderator of the green panel.

Conservation International was also represented on the panel, together with Mauricio Fragoso from Prooceano  and Tiago Martins of Remoteck.

«We have worked with conservation of the ocean for decades, but we have not given the same attention to coastal and maritime ecosystems as to the rainforest. This is happening now, and we are asking the private sector to the table, and hope to see synergies, but need to find a balance between production and conservation», says Flavia Rocha, Political Director of CI.
This is a view that Norway´s Ambassador to Brazil, Mr. Nils Gunneng shares.
«Ocean health is high on the agenda. We must protect in order to harvest. Norway and Brazil share great potential for collaboration, and we hope this seminar will inspire new ideas and initiatives. We are ready to support your endeavors», Mr. Gunneng said in his address.
By Runa Hestmann, NBCC journalist
(runa.tierno@nbcc.com.br)