Fish on the menu 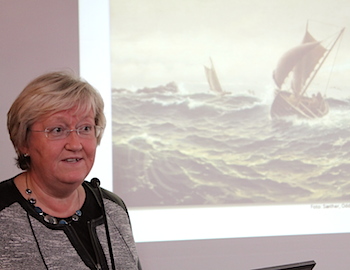 Bacalhau is probably what Norway is most famous for in Brazil, Consul General Helle Klem said in her opening remarks at the event. Here she is with Elisabeth Aspaker (in the middle) and ambassador Aud Marit Wiig (to the left).Norway´s Minister of Fisheries visits Sao Paulo and Rio de Janeiro as bacalhau sales increase in 2014.

On October 21, Mrs. Elisabeth Aspaker, the Norwegian Minister of Fisheries attended the 4th Bacalhau Business Encounter in Rio de Janeiro. It is the first time Mrs. Aspaker visits Brazil as a minister, and on October 20, 2014, she dined with her colleague, the Brazilian Minister of Fish, Mr. Eduardo Benedito Lopes, in Rio de Janeiro. Meeting important stakeholders of the seafood sector was one of the main goals for this latest high-level visit to Brazil. Representatives from all the main Brazilian supermarket chains were also present at the event.

“For a long time, codfish was the most important commodity for Norway, and this is something that has characterized our society from the viking age to present time. The sea has always been a vital provider of resources”, Mrs. Aspaker said at the bacalhau event on October 21.

Today, the sales of codfish are increasing in Brazil, and the ties between the two countries are becoming closer. In November, a seminar is scheduled to take place in Brasilia, and regulations of the seafood sector is on the agenda.

During her presentation in Rio de Janeiro, Mrs. Aspaker outlined the management principles for the Norwegian seafood sector. Science, research and regulations are all among these principles. Keeping international standards has always been a key priority.

Norway and Brazil – strengthening ties since 1842.“This is a dynamic and rapidly changing market, and competition is getting tougher. The cod is our most valuable stock, and we manage it jointly with Russia. The stock is in a good condition, but in 2015, the quota will be slightly reduced”, she said.

Growing market
This is why Johnny Håberg, the director of the Norwegian Seafood Council in Brazil, expects even further growth in prices as quotas are reduced.

“This year the export of codfish to Brazil has grown 11 percent in volume and 23 percent in value. If we look at the Gadus Morhua alone, the sales have grown 40 recent in both volume and value. 25 percent of all the Norwegian bacalhau is exported to Brazil. While we see new tendencies in food consumption, 60 percent is still sold whole, as we know the classic codfish, in the supermarkets, and Norway continues to be market leader of the segment”, Mr. Håberg said.

Portugal, Denmark and China are currently the main markets for Norwegian cod, and the number of markets is increasing. Brazil also buys 25 percent of all the klippfish saithe from Norway.

He was also one of the speakers at the event.  Hallvard Lerøy is the second biggest producer of salmon and trout in the world. Lerøy is now launching new products on the Brazilian market.

“Huge volumes are going into Brazil, mainly from Chile, and we see a 24 percent increase from last year. This is amazing. But the seafood category in supermarkets in Brazil is underdeveloped and we see room for improvements”, Mr. Tennefoss said.

Salmon superpower
Before arriving in Rio de Janeiro, Ellsabeth Aspaker visited Sao Paulo, where she toured the Mercado Municipal, the biggest bacalhao market in the world and attended a similar seminar at the Museu de Arte Moderna in Parque Ibirapuera. The world famous Portuguese chef Vitor Sobral was responsible for the lunch in Sao Paulo.

The minister is also visiting Chile on her South America trip. In Puerto Montt, she will attend the AquaSur conference 2014, the largest of Southern Hemisphere, where she will meet with counterparts from Iceland and Scotland.

On October 23, she visits the facilities of Marine Harvest in Chile, the world’s biggest salmon producer, controlled by Norwegian John Fredriksen.

Marine Harvest produced almost a quarter of the world’s salmon in the second quarter of this year and is already Chile’s largest salmon exporter.